A cautionary tale is a traditional story told in folklore, to warn its hearer of a danger. There are three essential parts to a cautionary tale, though they can be introduced in a large variety of ways. First, a taboo or prohibition is stated: some act, location, or thing is said to be dangerous. Then, the narrative itself is told: someone disregarded the warning and performed the forbidden act. Finally, the violator comes to an unpleasant fate, which is frequently related in large and grisly detail. Many traditional folktales and fables, from The Boy Who Cried Wolf to Little Red Riding Hood, have their origins in cautionary tales.

Cautionary tales are ubiquitous in popular culture; many urban legends are framed as cautionary tales: from the lover's lane haunted by a hook-handed murderer to the tale of a man who shot a cactus for fun only to die when the plant toppled onto him. Like horror fiction generally, the cautionary tale exhibits an ambivalent attitude towards social taboos. The narrator of a cautionary tale is momentarily excused from the ordinary demands of etiquette that discourages the use of gruesome or disgusting imagery because the tale serves to reinforce some other social taboo. 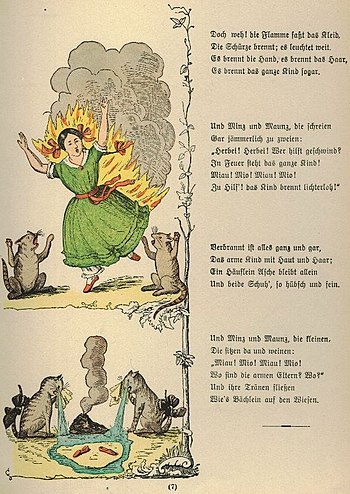 Stories about playing with matches do not have happy endings. An illustration from "The Dreadful Story of Pauline and the Matches" from Struwwelpeter, by Heinrich Hoffman, 1858.

Those whose job it is to enforce conformity therefore frequently resort to cautionary tales. The notorious German language anthology, Struwwelpeter

, contains tales such as "Die gar traurige Geschichte mit dem Feuerzeug" (The Dreadful Story of Pauline and the Matches); it is fairly easy to deduce the ending from the title. Social guidance films such as Boys Beware

are deliberately patterned after traditional cautionary tales, as were the notorious driver education films of the 1960s, or military films about syphilis and other sexually transmitted diseases. The framework of the cautionary tale became a cliché in the slasher films of the 1980s, in which adolescents who had sex, drank alcoholic beverages, or smoked marijuana inevitably ended up as the victims of the serial killer villain.

On the other hand, in the adolescent culture of the United States, for more than a hundred years the traditional cautionary tale gave rise to the phenomenon of legend tripping, in which a cautionary tale is turned into the basis of a dare that invites the hearer to test the taboo by breaking it. In folklore, the engagement in behavior inspired by a legend is called "ostentation"; this leads to teenagers travelling to cemeteries and moving or vandalizing tombstones to test the truth of an associated legend, and to show their stupidity bravery as a result.[1]

The genre of the cautionary tale has been satirized by many writers. Hilaire Belloc

in his Cautionary Tales for Children, presented such moral exemplars as "Jim, Who ran away from his Nurse, and was eaten by a Lion", and "Matilda, Who told lies, and was Burned to Death". Lewis Carroll, in Alice's Adventures in Wonderland, says that Alice

had read several nice little histories about children who had got burnt, and eaten up by wild beasts and other unpleasant things, all because they would not remember the simple rules their friends had taught them: such as, that a red-hot poker will burn you if you hold it too long; and that if you cut your finger very deeply with a knife, it usually bleeds; and she had never forgotten that, if you drink much from a bottle marked "poison", it is almost certain to disagree with you, sooner or later.

In The Complete Tribune Printer, Eugene Field gave cautionary tales an ironic inversion, as in The Gun:

This is a gun. Is the Gun loaded? Really, I do not know. Let us Find out. Put the Gun on the table, and you, Susie, blow down one barrel while you, Charlie, blow down the other. Bang! Yes, it was loaded. Run quick, Jennie, and pick up Susie's head and Charlies lower Jaw before the Nasty Blood gets over the New carpet.

Some films, such as Gremlins, satirized this framework by imposing very arbitrary rules whose violation results in horrendous consequences for the community.