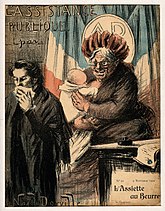 The French Nanny State of 1901

Nanny state (also known as government paternalism) is a snarl term used by libertarians and sometimes, though hypocritically, by conservatives for perceived over-regulation by a government. The classic example involves laws requiring the wearing of a seat-belt, but the label can refer to any behavior that risks harm to the self but no one else. A list of potential candidates for accusations of nanny statism would include:

Nannyism or reasonable restrictions on "rights" (like the right to be stupid)?[edit]

As usual, whether the government action qualifies as “nanny statism” depends on whether the person agrees with the action. Sin taxes, at minimum, raise revenue for necessary infrastructure, education, and public services without distorting the economy in harmful ways. Actions that seem to threaten only the well-being of the person who engages in the risky behavior can potentially harm others because others often have to pay for the medical treatment by way of increased hospital costs. Recreational drugs have harmful effects on people other than just the user, notably the neglected children of drug addicts and people who have to deal with drunken/drugged behaviour from others (see Drug Liberalization for more on this topic).

This politics-related article is a stub.
You can help RationalWiki by expanding it.
Retrieved from "https://rationalwiki.org/w/index.php?title=Nanny_state&oldid=2361056"
Categories:
Hidden category: