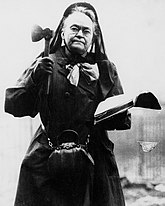 In a moral victory, everybody loses.

A clean living movement is a historical episode of moral panic, ostensibly about social agitations in the name of public and personal health. They usually cloak manifestations of racism, xenophobia, and other forms of bigotry. There have been a number of these episodes in the history of the United States, often coinciding with upticks in evangelical religions and other religious revivals.

The term was coined by sociologist Ruth C. Engs

Cycles of social reforms have been observed in religion, politics, the economy, and other areas of human endeavor. Reforms to clean up society in regard to issues related to health also appear to come in cycles. Reform campaigns during clean living movements include temperance (anti-alcohol), social purity (sexuality), diet, physical exercise, eugenics (heredity), public health, and anti-tobacco and anti-drug campaigns. Interest in these issues rises and falls more or less simultaneously with, and often following, a religious awakening that sees both evangelical sentiments and the development of new sects. The movements also coincide with episodes of xenophobia or moral panic, in which various ethnic or cultural minorities are targeted as undesirable influences for medical or moral reasons.[1]

In the United States, and to somewhat of a lesser extent in the United Kingdom and other Western European cultures, these health reform movements have been claimed to come in approximate 80-year cycles, ranging from about 70 to 90 years for individual issues.[1] The prognosticating value of social cyclical theories are generally pseudoscience.

Reformers in these movements first attempt to convince individuals they should not drink, smoke, or engage in behaviors or lifestyles harmful to health. When this inevitably fails, public policies to prohibit the behaviors are instituted. After the main thrust of the movement, when reformers have failed to change behaviors even by legislation, eugenics comes into vogue, as reformers may reason that the root causes must be in the genes. During the cycle's ebb, popular changes or reforms that make sense or have clearly positive effects, such as personal hygiene or sanitation, are institutionalized and become part of the new social norms to be followed. On the other hand, a backlash often emerges against unpopular or restrictive reforms, such as prohibition of alcohol.

During the Jacksonian era and out of the Second Great Awakening, a crusade against "demon rum" and other alcoholic beverages ensued in the northeastern and Midwestern United States. This resulted in statewide prohibition of alcohol in the northeastern United States, beginning in the state of Maine in 1851. However, rampant smuggling across the Ohio River and down from Canada soon ended these state laws, as they proved unenforceable. Various ethnic, cultural, and religious minorities, most notably Irish immigrants and Roman Catholics, were held up as examples of poor morality during this period, thought to be responsible for both excessive drinking and the spread of diseases such as cholera.

During this era, a focus on exercise, non-use of tobacco, and the elimination of coffee, tea, sugar, meat, and spice from a diet, called "Grahamism" — named after reformer Sylvester Graham,

namesake of the Graham cracker

The Progressive Era's health reform movement emerged in the Third Great Awakening. Individual health crusades, as part of an overall Clean Living Movement, included the temperance and anti-saloon movements, which evolved into the prohibition movement. This resulted in the Eighteenth Amendment to the United States Constitution, bringing about Prohibition and its associated rise in organized crime. An anti-tobacco movement also emerged during this era. A number of cities had anti-smoking laws in public buildings, and trains, restaurants, and streetcars often had smoking and non-smoking sections. However, by the mid-20th century, the remaining laws of this nature were generally ignored.

This was also the period in which Christian fundamentalism became identified as a specific tendency within American Christianity. Anti-evolution laws were proposed during this period, leading eventually to the Scopes monkey trial. The theology of dispensationalism also became identified with fundamentalist Christianity, assisted by popular commentaries like the Scofield Reference Bible. Evangelists like Billy Sunday

promoted a message condemning Americans for their imagined immoralities.

of 1914, with opium presented as an exotic vice imported with immigration from China. In addition to these drug prohibitions, further immigration from East Asia was sharply curtailed by the Asian Exclusion Act

of 1924. Likewise, the prohibition of cocaine and marijuana during this period was associated with anecdotes about African Americans committing crimes under the influence of these drugs.

A "purity" movement for social hygiene, campaigning against prostitution and sexually transmitted diseases, went hand in hand with the elimination of other supposed evils, such as alcohol, from society. The purity movement also included the elimination of the double standard of sexuality for men and women by vilifying all forms of sexuality equally. In the late nineteenth century, Anthony Comstock and his League for the Suppression of Vice lobbied for and got regulations that forbade the distribution of contraceptive information through the mails. The eugenics movement had its greatest popularity during this period. Pre-marital testing to ensure that neither partner had syphilis was mandated by law in many states. In the United States, eugenic sterilization laws were passed, to prevent individuals with severe mental or physical health problems including alcoholism from reproducing, in over 30 states.[2]

A clean living movement again took root during the late-20th century, characterized by many crusades and counter-crusades. Activities that surged in the earlier years of the era were often met with counter-movements about ten years later. For example, "women's liberation" was countered by a "pro-family" movement; the use of marijuana, LSD, and other drugs was followed by the War on Drugs; lowering of the drinking age was followed by a raising of the drinking age and new laws against drunk driving; non-marital sexual activity was challenged by a new "purity" movement; and legal rights to obtaining abortions ("pro-choice") were met with agitation against abortion.[2]

The baby boom generation of the post-World War II era had experimented with different behaviors not tolerated by the older generation. By the mid-1970s, more conservative Americans began to react against what they perceived as immoral behaviors. They coalesced into political action that included campaigns against the use of drugs, alcohol, sexual, and other activities.

Organizations such as the "Moral Majority" expressed this backlash, blaming the counterculture of the 1960s as the cause of social decay. Politicians, even Democrats such as Tipper Gore, Hillary Clinton, and Joe Lieberman, began a moral crusade against rock, hip-hop, and video games, blaming them for a variety of evils including teenage sexuality, violent crime, and mass shootings. Abstinence programs attempting to frighten young people away from sexual activity were endorsed as a form of sex education. Mothers Against Drunk Driving lobbied for the denial of due process rights for those accused of driving under the influence, with punishments such as license suspensions applied immediately upon arrest.[2]

A secular health-reform movement, which to some took on religious or New Age overtones, also surged out of the youthful generation. Fitness and exercise, diet, alternative religions and medicine, consumer rights, smoke-free environments, and other health reforms became prime concerns of the day. Curious beliefs in "toxins" imagined to lurk in foodstuffs, and elaborate regimens to purge them, became exercises in ostentatious virtue. Organic food, usually priced well in excess of its non-organic counterparts, became an exercise in conspicuous consumption and halo-polishing. Dietary fads such as vegetarianism and veganism acquired evangelical and judgmental overtones.[2] Even within the counterculture itself, the straight edge movement emerged out of punk rock fandom, pushing a stridently anti-drug and anti-alcohol message that, in its more radical forms, was extended to caffeine, nicotine, premarital sex, and meat consumption.