Sugar is a "sweet-tasting, short-chain, soluble carbohydrate"[1], and can refer to a number of related molecules including sucrose (cane sugar), fructose (fruit sugar), and glucose. Sugar is found in many foodstuffs, including candy/sweets/chocolate, non-diet carbonated soft drinks, energy drinks, many alcoholic drinks, breakfast cereals, fruit, milk, and a surprising number of processed foods.

Human beings appear to have an innate fondness for sweet foods, which made sense when that meant fruit or maybe honey, but today thanks to the cultivation of sugar cane (Saccharum officinarum) and sugar beet (Beta vulgaris), sugar is a cheap and almost ubiquitous product of industrialised agriculture.[2] Sugar is controversial in the field of public health. Along with other high-calorie foods, it is blamed for high rates of obesity and diabetes, but there are arguments over whether sugar, particularly fructose, is more dangerous than fat or starch. As yet, the evidence is inconclusive.

Taxes on sugar are increasingly being used to attempt to reduce sugar consumption. There is evidence that they reduce sales, but less as to their effect on health.

Chemists know many different types of sugar. Most common are monosaccharides (simple sugars), and disaccharides, which comprise 2 monosaccharides bonded together in a single molecule. Oligosaccharides (which are found in plant fiber) typically include three to ten simple sugars, and may be difficult for mammals to digest without gassy by-products such as methane. A few of the more common sugars are listed below.

Obesity is associated with many health problems and risks. Excessive consumption of any high calorie food will result in weight gain. However, scientists argue whether sugar is more dangerous than other sources of energy like starch or fat. In the past health experts suggested people should avoid fat, but more recent research has failed to find serious health problems associated with many types of fat; this led to the promotion of low-carb diets such as Atkins.[3] Today sugar is the media's chief demon, associated with weight gain, diabetes and heart disease.

The moderate argument against sugar is that sugary drinks and snacks contain empty calories, meaning they contain lots of energy which leads to obesity, but have little nutritional value. Hence while they can be eaten in moderation, you will need lots of other more nutritious foods as part of a balanced diet.[4]

Pediatric endocrinologist Robert Lustig has argued that sugar — specifically fructose — is a "toxin" responsible for the high prevalence in Western societies of obesity, diabetes, heart disease, high blood pressure, and many cancers. He claims sugars which contain fructose are metabolised differently from starch (which is broken down into glucose): fructose is metabolised by the liver while glucose is used directly by cells all over the body, meaning fructose stresses the liver. In lab rats, high levels of fructose are converted to fat and cause insulin resistance which leads to obesity, heart disease, and type 2 diabetes — this is however only proven in rats.[4] While high glucose levels are regulated by insulin and hunger-suppressant leptin in the human body, fructose does not have the same effect; indeed fructose may raise levels of ghrelin which encourages hunger.[2] High-dose cancer studies of sucrose in mice were negative.[5]

Other scientists contest Lustig's work; John White has pointed out that fructose consumption has actually been falling for the past decade, while obesity is increasing. And most of the research on the dangers of fructose is based on giving huge quantities to rats: as well as other biological differences, rats may metabolise fructose differently to humans. A study by John Sievenpiper found no effect of fructose on body weight, blood pressure, or uric acid levels. A small South African study showed a diet rich in fruit, and hence fructose, did not lead to weight gain.[2] A meta-analysis of sugar-sweetened beverages (SSB) in children (N=25,745) and adults (N=174,252) found that SSB consumption promoted weight gain.[6]

There are claims that galactose (found in milk) causes premature aging or ovarian cancer; however this is speculative and other studies have found nothing.[7] In particular, a 1990s Australian study found increased ovarian cancer risk was associated with full-fat dairy but not galactose consumption.[8]

Uncontroversially, sugar is also responsible for tooth decay. Aside from that, the science is uncertain so the best advice is probably to eat a balanced diet, avoid excessive amounts of any food, and brush after every meal. Or do what you like and have fun.

Sugar taxes as a tool for reducing consumption[edit]

A sugar tax is a tax on sugar, but typically it is limited to high-sugar foods such as soft drinks. Some countries have implemented or plan to implement such a tax. Others have a fat tax or a tax on high-calorie food, which will penalise sugar, starch, and fat.

In the UK, a sugar tax on soft drinks was proposed in the Budget on 16 March 2016. Drinks are divided into tax bands depending on sugar content. Those with between 5g and 8g per 100 ml will pay 18p per litre, and those above 8g will pay a higher rate of 24p per litre.[9]

The liberal city of Berkeley, California became the first place in the USA to pass a sugar tax in 2014, when it implemented an excise tax of 1 cent per fluid oz (35 cents per litre).[14]

Unfortunately, the tax would only target added sugar in soft drinks, but not added sugar in other places you wouldn't normally expect. In the US, "cake" is routinely misspelled as "bread", with many varieties having sugar as the second most common ingredient. Ideally, the tax would be on the sugar itself, making it more expensive to use in the manufacturing process. In fact, that's exactly what happened; during the 1970's, President Jimmy Carter attempted to nip the obesity problem in the bud then and there by increasing the tariffs on imported sugar.[15] The response by corporations was to instead use totally-not-sugar High Fructose Corn Syrup. In everything. For reference, HFCS is called that specifically to avoid being called sugar, in the same way that companies are currently lobbying Congress to rename HFCS as "corn sugar" to avoid the negative association with fructose.[16] Don't worry folks, once we take down HFCS, the companies will use "concentrated apple extract" instead.

There are three basic measures of efficacy for a sugar tax: price, consumption (or sales), and health effects, but the first two are easier to study.

Most taxes have raised prices somewhat, even if producers have taken some of the hit; in theory increased prices should affect customer behaviour. The Mexican tax on soft drinks reportedly reduced purchases by an average 6% in 2014, with lower-income households cutting purchases by 9%.[17]

Mike Rayner of the University of Oxford has modelled the potential effects in the UK. He estimated that a tax of 20% or 20p per litre would prevent or delay 200,000 cases of obesity.[17] Most sugar taxes have been in place for too little time for any judgement of whether they actually reduce obesity, diabetes, or other health problems.

Liberals (and other groups loosely associated with the left) argue that as low income families tend to buy more sugary products, this tax will only put pressure on their budgets, regardless of health benefits.

Libertarians (and other groups loosely associated with the right) argue that the tax and other regulations are government overreach, interfering with how you want to live your life.

And this is before getting into candy manufacturers themselves complaining about lost profits, though health food producers would likely be in favor for the opposite reason.

A sugar tax is not the only way to reduce sugar consumption. There have been calls for restrictions on the advertising of sugary drinks and snack foods, and for manufacturers to voluntarily cut the amount of sugar in products.[18]

As with tobacco there is a lot of money in sugar production, and the food industry is generally opposed to restrictions on sugar, whether higher taxation, advertising bans, or health warnings on packaging. In 2016, it was revealed that the Sugar Research Foundation (now known as the Sugar Association) "paid nutrition experts from Harvard University to downplay studies linking sugar and heart disease". The experts published a 1967 review in the New England Journal of Medicine, which wrongly influenced nutritionists for decades.[19][20]

The Coca-Cola company, one of the world's biggest manufacturers of flavored sugar water, insinuated itself into the China government's anti-obesity campaign, making the focus on exercise to the exclusion diet.[21] 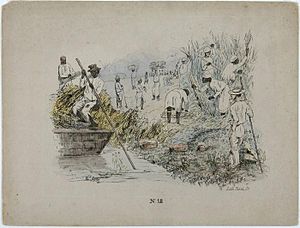 The production of cane sugar in the Americas was for a long time done by slaves in the Caribbean and South America. Even today the conditions of sugar workers can be horrible; a 2006 report found workers in the Dominican Republic living in squalid conditions with insufficient food, and with children working in the fields.[22] Luckily, nice Germans bred sugar beet and the Japanese invented high fructose corn syrup, so you can rot your teeth with moral superiority.

And if you want to cut down on sugar, other sweeteners are a whole different minefield.

Sugars are among the most important base chemicals for many industrial processes, most famously the production of alcohol (both for drinking and for other purposes, such as driving Brazilian cars).