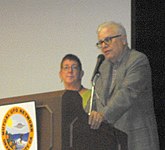 Anne and Whitley Strieber appearing at MUFON in 2012

The Mutual UFO Network or MUFON is one of the largest UFO-chasing organizations in the USA. Despite their claims of being "scientific", they are not terribly skeptical.

MUFON was founded in 1969 as the Midwest UFO Network. Its headquarters, previously in Cincinnati, Ohio, are now in Irvine, California. In addition to their website, they publish the MUFON UFO Journal.

MUFON has gotten a reputation as a haven for the credulous and gullible. More than a few MUFON members who were surveyed believe they have psychic abilities.[1]

According to their website, "MUFON strives to use the scientific method." (So far, so good…) "Data is collected through online reports…" (Wait. Someone online saying they saw a UFO is considered data?) "A MUFON Field Investigator then interviews the witnesses who made the report…" (Ah. At MUFON, anecdotal evidence = science).[2]

More clues to MUFON's approach to science can be found at their online "Experiencer Questionnaire"… which soberly advises: "If you answered 15 or more questions in the affirmative, you might be an ETI contact experiencer."[3]

Want to be an official MUFON Field Investigator? Just purchase their mandatory MUFON training materials at $99.95, [4] score 80% on the MUFON exam — and you're in! They'll even sell you a cool Official Field Investigator photo ID badge that's sure to impress the gang at the next Star Trek convention.[5]

Oh, and so much more[edit]

In 2018, evidence of wide-spread anti-immigrant, anti-trans and anti-Muslim sentiments among MUFON officials and Inner Circle donors emerged. Going for a trifecta, the organization is also reportedly unwilling to adequately address sexual harassment.[6] Most embarrassingly, in 2020 MUFON head Jan Harzan was arrested for allegedly trying to arrange sex with an undercover police officer whom he believed was a 13-year-old.[7]

True believers in global conspiracies say that MUFON has been "heavily infiltrated" by CIA and the NSA in an effort to suppress evidence of UFO/alien/New World Order activity.[8][9]:230-231