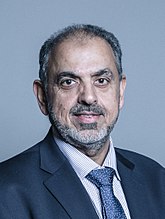 Nazir Ahmed, Baron Ahmed (1957–) is a British politician who was a member of the House of Lords and a former member of the Labour Party. He has attracted controversy.

In April 2012, Ahmed reportedly denounced the US government's bounty on Lashkar-e-Taiba chief Hafiz Muhammad Saeed, calling it an insult to all Muslims and stating that "If the US can announce a reward of $10 million for the captor of Hafiz Saeed, I can announce a bounty of 10 million pounds on President Obama and his predecessor George Bush".[1] This resulted in his temporary suspension from the party.[2] He denied making these statements,[3] even though the website of the university that was hosting him at the time also quotes him as saying much the same thing in its summary of the event.[4]

Ahmed had previously been jailed for dangerous driving following an incident in which a man was killed;[5] in March 2013, it was reported that he blamed his prison sentence on a Jewish conspiracy.[6] He got suspended again for that one,[7] and later resigned from the Labour party due to the controversy.[8]

In 2020 he retired from his seat following the result of a Lords Conduct Committee investigation[9] that concluded he exploited a member of the public who had sought his help to report an exploitive faith healer to the police, instead coercing her into a sexual relationship. In proper governmental fashion, it took a news report on the issue after she was denied an investigation to get the government to actually look into the complaints.[10]