Creation of the welfare system and state[edit]

The United Kingdom is a union state – i.e a state where a state's component parts have joined together due to a union of crowns, administrative standardisation occurs but the component parts of a nature still retain pre-union features (i.e. separate churches) and power is still centralised, but with limited devolution. Because of this, the structure of various services (including welfare) in different countries of the UK changes in certain respects; for example, the laws which apply in Scotland may not be equally applicable to Northern Ireland or England and Wales

The UK has been defined as having a liberal welfare state system.[2][3] A welfare state is defined by the Encyclopædia Britannica as: "[A] concept of government in which the state plays a key role in the protection and promotion of the economic and social well-being of its citizens. It is based on the principles of equality of opportunity, equitable distribution of wealth, and public responsibility for those unable to avail themselves of the minimal provisions for a good life."[4] The Britannica also states that "fundamental feature" of any welfare state is that of social insurance, and the UK's National Insurance provides this.[4] This has been provided since 1911 by the National Insurance Act, and was originally a protective system against illness and unemployment; this later expanded to provide retirement pensions and other benefits.[5] Another feature of the welfare state is the public provision of basic education, health services (such as the National Health Service), and housing (in some cases at low cost or without charge).[4]

These were introduced to Britain in two stages: The Liberal reforms (1906–1914, considered the origins of the welfare state)[6] and the Beveridge Report of 1942, and subsequent post-war Labour government.

A study of poverty in 1901 by Seebohm Rowntree (called Poverty, A Study of Town Life) found that in a society where those who didn't work didn't eat, there were three times in people's lives when they were especially vulnerable: as a young child; when they were old; and when they were sick or unemployed.[6] In order to counteract his, so-called Radical Liberals led by Lloyd George took their first steps towards Britain's first welfare state.[7] The Liberal government of 1906-1914 implemented welfare policies concerning three main groups in society: the old, the young and working people.[6]

Overall, the Liberal reforms marked a transition point between old laissez-faire attitudes, and those of a more collectivist nature. The reforms made only limited inroads into the problem of poverty. The pensions paid were inadequate and the unemployment benefits were limited to only certain trades, and then provided only for the employee and not his family. Winston Churchill summed up the aim of the Liberals when he said: "If we see a drowning man we do not drag him to the shore. Instead, we provide help to allow him to swim ashore." In other words, the Liberals tried to provide some help for the poorer sections of society, in order that they could help themselves.[13] 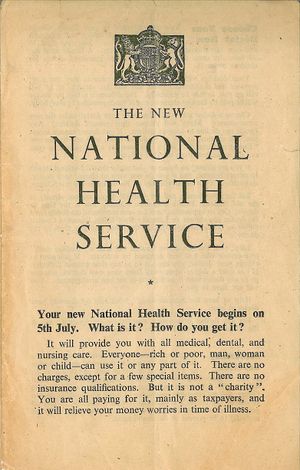 Leaflet concerning the launch of the NHS in England and Wales.

The aftermath of the First World War boosted demands for social reform, and led to a permanent increase in the role of the state in British society. The end of the war also brought a slump, particularly in northern industrial towns, that deepened into the Great Depression by the 1930s.[7]

During the war, the government became much more involved in people's lives via governmental organisation of the rationing of foodstuffs, clothing and fuel and extra milk and meals being given to expectant mothers and children.[7] The wartime coalition government also committed itself to full employment through Keynesian policies, free universal secondary education, and the introduction of family allowances.[1] Many people welcomed this government intervention and wanted it to go further.[7]

William Beveridge is associated most with the setting up of a blueprint for the post-war welfare state. His Report on Social Insurance and Allied Services was published in December 1942, and it created much public interest at the time.[14] This became a major propaganda weapon, with both major parties committed to its introduction.[1] In essence, Beveridge advocated that all people in work would pay a single weekly flat rate contribution into the state insurance fund.[14]

In 1945, contrary to expectations, Labour won a landslide victory at the General Election and with an overall majority in Parliament there was nothing to stop the new government from carrying out its manifesto programme. Labour's reforms were based on the Beveridge Report and it began tackling the five giants identified by Beveridge:[14]

Dismantling of the welfare state[edit]

Thatcher began to attend lunches regularly at the IEA

, a think tank founded by the poultry magnate Antony Fisher, a disciple of Friedrich von Hayek; she had been visiting the IEA and reading its publications since the early 1960s. There she was influenced by the ideas of Ralph Harris and Arthur Seldon, and she became the face of the ideological movement opposing the welfare state. Keynesian economics, they believed, was weakening Britain. The institute's pamphlets proposed less government, lower taxes, and more freedom for business and consumers.[15]

Neoliberalism is famously associated with the economic policies introduced by Margaret Thatcher in the United Kingdom.[16] Neoliberalism is a term which, since the 1980s, has been used by scholars in a wide variety of social sciences[17] and critics[18] primarily in reference to the resurgence of 19th century ideas associated with laissez-faire economic liberalism. Beginning in the 1970s and 1980s, its advocates supported policies such as privatization, fiscal austerity, deregulation, free trade, the reduction of the welfare state and reductions in government spending in order to enhance the role of the private sector in the economy.[16][19][20][21][22][23][24] The transition of consensus towards neoliberal policies and the acceptance of neoliberal economic theories in the 1970s are seen by some academics as the root of financialisation 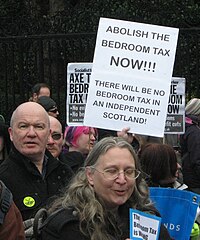 Protesters opposing the bedroom tax outside the Scottish Parliament.

Comparing Coalition austerity measures with the Opposition's, the respected Financial Times commentator Martin Wolf commented that the "big shift from Labour ... is the cuts in welfare benefits."[30] The government's austerity programme

, which involves reduction in government policy, has been linked to a rise in food banks. A study published in the British Medical Journal in 2015 found that each 1 percentage point increase in the rate of Jobseeker's Allowance (dole) claimants sanctioned was associated with a 0.09 percentage point rise in food bank use.[31] The austerity programme has faced opposition from disability rights groups for disproportionately affecting disabled people. The "bedroom tax"

is an austerity measure that has attracted particular criticism, with activists arguing that two thirds of council houses affected by the policy are occupied with a person with a disability.[32]

Arguably the most alarming aspect of the current government's welfare reform policy is its redefinition of "poverty"; poverty is no longer classified by a family's income, but as to whether a family is in work or not.[33] Considering that two-thirds of people who found work were accepting wages that are below the living wage (according to the Joseph Rowntree Foundation),[34] this has been criticised by anti-poverty campaigners as an unrealistic view of poverty in Britain today.[33]

The Department for Work and Pensions has been criticised recently for using false case studies of benefits claimants in one of its leaflets following a Freedom of Information request by Welfare Weekly, claiming that they were for "illustrative purposes only"[35][36] and that it was "quite wrong" to pass these off as genuine quotes.[37]

One of these reforms was the Welfare Reform and Work Bill, supported by Iain Duncan Smith (Secretary of State for Work and Pensions) and the Conservative Party. Many people have criticised the bill, with some even going as far as to defining it as a "Pandora's box for Britain's poorest families".[33] The cuts to tax credits have been criticised for unfairly disadvantaging the working poor, and a clause in the bill allows the benefits cap of £20,000 (£23,000 in London) to be reduced further, without any consultation with Parliament, thus making those from larger families even worse off.[33] It also called for £12bn to be made in cuts.[38]

Harriet Harman (deputy leader of the Labour Party) ordered her Labour MPs to abstain from the vote for the bill as opposed to voting against it (a move which US-based magazine The Nation said "underline[d] Labour's moral and intellectual bankruptcy"[39]). However, one potential Labour leader associated with the hard left, Jeremy Corbyn, voted against the bill, alongside 48 Labour MPs who defied the orders of the deputy leader.[40] Other parties in opposition to the bill were the Scottish National Party (who said that the Bill was "...an attack on civil society, it's an attack on our poorest and hard working families, and it's a regressive Bill that takes us back in time with cuts that will hit women and children the hardest"),[41] the Liberal Democrats, the Democratic Unionist Party (Northern Ireland), Plaid Cymru and the Green Party of England and Wales.[42]

In its defence, the government's official website, GOV.UK, claims under the heading Welfare that: "The benefits system needs to be reformed to be fair, affordable and able to reduce poverty, worklessness and welfare dependency. This will make sure people are helped to move into work while the most vulnerable get the support they need."[43]

Critics argue that this is the government's excuse to execute large-scale cuts in services, and that it perpetuates the stereotype that people on Incapacity Benefit or Disability Living Allowance are unwilling to work, faking their condition, or otherwise being "scroungers".[44] and that the term "welfare depedency" is tantamount to blaming the victim.[45] The rhetoric surrounding issues such as so-called benefit scroungers often ignores the facts: false benefits claimants are often a drop in the ocean in comparison to tax dodgers. As commentator Owen Jones writes in his book The Establishment: And How They Get Away With It:

A slim majority of the British public agree with the view that we should be targeting tax evaders more than benefits claimants (52%,[47] although undoubtedly the number would be higher if it were not for sensationalist headlines in the tabloid press), and Iain Duncan Smith himself has dad to admit that the Department for Work and Pensions has over-emphasised statistics on benefit fraud,[48] whereas when asked outright by the chair of the Public Accounts committee if Apple, Google, Facebook, eBay and Starbucks were morally wrong for avoiding nearly £900m of tax between them, David Cameron gave a weak response, saying "we do need to make sure we are encouraging these businesses to invest in our country".[48]

However, very many people suspect that "politicians and big business are so close" that tax dodging would "be allowed to continue, irrespective of who is in government". That view is embraced by 67%, as against just 27% who reject it.[47] This shows that emphasis on those on the lower rungs of our society, whether it be so-called benefits scroungers or immigrants, is at the very least disingenuous, at the most cynical and manipulative.

Let's look at the evidence: The National Audit Office noted in 2015 that approximately £1.6bn of fraudulent benefits were claimed, in comparison to £4.1bn in tax evasion, £3.1bn in tax avoidance and £5.4bn due to criminal activity (e.g. smuggling).[49]

These figures all show that the government are focusing on the wrong groups – the £3.1bn figure in tax avoidance, for example, is still completely legal. Even if we were to gain all £1.6bn from fraudulent benefits claimants, this would only be the tip of the iceberg, and that people who criticise benefits scroungers without batting an eye to tax avoidance often have something to hide.