An open mind is a mind that is receptive to new ideas and information. It is often compared to a closed mind, which will reject ideas without any consideration.

While there is some philosophical validity to the distinction between open and closed minds, particularly in the case of empiricism, when used in an argument on the internet, it's almost always a form of whining. Being told to be "open minded" about something — like being made to listen to Michelle Malkin, for example — is usually a code for "you're not going to like this, but I think you should consider subjecting yourself to it anyway". Conversely, being told that you are "closed-minded" is generally a means of asserting that "I don't like the fact that you're proving me wrong, so I will pretend that your failure to agree with my argument is a philosophical deficiency". Being told that you are "closed-minded" simply shows that the one writing is confused about the difference between "open" and "fair" (or is simply lazy in their writing).

The scientific method demands open-mindedness because it requires consistency with available data and evidence, regardless of where that leads. Sometimes evidence will lead to a conclusion that defies common sense, which an otherwise closed mind would have trouble with. Quantum mechanics is the most illustrative example of this process, as practically every aspect of quantum physics appears to defy ordinary common sense; duality, slit diffraction, and quantum entanglement are all completely at odds with the way that we have evolved to view the world. Without the open-mindedness to reject our common sense view of the world, some of the most complex and counter-intuitive science would be off-limits to human endeavour.

To make any advances in science and technology, new ideas need to be (and are) presented constantly. Through open-minded consideration of these new ideas and thorough studies of them, science can winnow out the bad ideas and keep the good ones. (Weak ideas shall perish!) A closed-minded researcher, unwilling to consider alternatives to their own pet theory or hypothesis, will not advance very far or contribute much to science.

Science is often accused of being "closed-minded". Almost without exception, this is code for "scientists won't blindly accept my crackpot idea". It's certainly not a matter of closed-mindedness and unwillingness that these ideas aren't accepted by the scientific community, because the individuals within it have a lot of motivation to prove each other wrong. In writing a scientific article, this is known as peer review; in experimental science, people must be able to replicate one's results, within the limits imposed by inherent limitation of equipment. There would be money and fame in a scientist showing, with the evidence to back it up and convince the rest, things such as the existence of ghosts, the (non-placebo) workings of homeopathy, or even a young earth. Often proponents of woo cry that science hasn't taken them seriously and has refused to do the research, imploring scientists and skeptics to "have an open mind". This is blatantly false; science has very often tried out these ideas or trialed that piece of alternative medicine, it's just that the results have come back negative, or that the idea has been proposed and disproved before. Consequently, accusing someone of being closed-minded is very often — but not always — an indication that the accuser themselves is the one who is closed-minded. 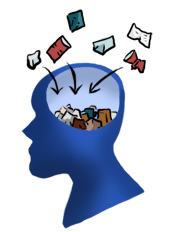 "The trouble with having an open mind, of course, is that people will insist on coming along and trying to put things in it." (Terry Pratchett, Truckers)

All that open-mindedness requires is that one considers an idea or proposal and does not reject it outright before any considerations or evaluations are made. Having an open mind does not mean accepting any new idea as true as soon as it is presented. If you consider an idea, and then reject it based on evidence or similar criteria, you do not have a closed mind. Lack of an "open mind", based on the misunderstanding between consideration and acceptance of new ideas, is therefore a common but groundless criticism of skeptics. Skeptical open-mindedness differs from credulous open-mindedness in that the skeptic has effective mechanisms for assessing ideas and rejecting those that are found wanting.[note 1][note 2]

Usually, and quite ironically, people who go around accusing others of being closed-minded are actually more closed-minded themselves. A conspiracy theorist, for example, may say "no one can convince me that the World Trade Center wasn't blown up by the government"[note 3] or a similar phrase. This is a clear example of a closed mind: a mind unwilling to accept that, perhaps, everything about an event was actually how it was officially presented — without aliens, reptilian humanoids, government plots, second gunmen, Illuminati, men in black, and so on. This archetypal conspiracy theorist will then go on to accuse anyone who rejects their crackpot ideas of being closed-minded. This sort of thing is, unfortunately, extremely common.

If you hang around in skeptic circles, sooner or later you'll hear (or more probably, read) a variation of the following:

As Pedantic, Humorless Rationalists™, we'd like to point out that a mind is not a skull and the phrase doesn't make any sense. So, please, don't repeat it mindlessly.

It makes sense at this point to offer a possibly better alternative: Keep your mind open, but not so open that just anything can move in and set up housekeeping.

The riposte to this annoying pseudo-aphorism is that an umbrella only needs to be open under certain circumstances. At other times, e.g. any time you're indoors, an open umbrella is a bloody nuisance.

This quote works better if you remember that the function of an umbrella is to keep stuff away from you (commonly rainwater), not to collect stuff, and in that sense, it only works when it is indeed open (i.e., when the deflective device is in a position to actually deflect stuff you don't want touching you).

The paradox of an "open mind"[edit]

QualiaSoup performs a brief and educational examination of some of the flawed thinking that prompts people who believe in certain non-scientific concepts to advise others who don't to be more open-minded — although even QualiaSoup is apparently confused about having a closed (not open) versus a close (not far) mind.