During the first few months of his administration, Faubus desegregated public transportation in Arkansas and investigated the possibility of integrating public schools, which was quite a courageous endeavor for a man of his time (and place).[2] His progressive approach to civil rights reform would prove to be short-lived, however. 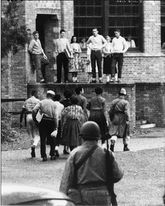 In 1954, the U.S. Supreme Court ruled that public schools had to be integrated. White Arkansans were not amused. In a stunning display of political douchebaggery, Faubus (envious of the success his opponents were having using segregationist rhetoric to stir up white voters) decided that the wisest course of action would be to deploy the Arkansas National Guard to Little Rock Central High School at the beginning of the 1957-58 school year in order to block nine colored African American students from entering. They were known as the Little Rock Nine.

U.S. President Dwight D. Eisenhower was not amused. He gave Faubus an epic presidential bitch-slap and federalized the Arkansas National Guard. He then deployed the 101st Airborne Division of the US Army to the school in order to suppress the inevitable redneck uprising mob violence that ensued and enforce the federal court order.[3] Students would have to finish the remainder of the school year under the supervision of the U.S. military. The school was closed for the 1958-59 school year, ending any hopes of the football team going to the state championship that season.[4] Amazingly, Faubus continued on as governor until 1967, when he chose not to run again, thank God. He ran for the Democratic presidential primary nomination over and over until 1986. He died in 1994.