Millard Fillmore (January 7, 1800–March 8, 1874) was the 13th President of the United States, serving from 1850 to 1853 after Zachary Taylor (for whom he was Vice President) died in office, the last Whig Party president. He also ran in 1856 as a Know Nothing, winning 21.5% of the popular vote but only winning Maryland in the Electoral College. His spouse was Caroline Carmichael McIntosh Fillmore. He often has a reputation as having a name that most people can recognize as belonging to a president, but with nobody able to remember anything else. His presidency is a great example of how being a centrist can backfire in contentious times.

One of the few presidents to have been born into poverty, he eventually rose up to become an attorney.[1] He was elected to the House of Representatives in New York's 32nd district in 1832 as a member of the Anti-Masonic Party, but he would later join the Whig party. He was a "moderate" when it came to slavery; he opposed the practice, but believed that the federal government had no right to interfere with states' rights to have slaves. After being defeated in bids to become Speaker of the House in 1841, Vice President in 1844, and Governor of New York also in 1844, his big break would come in 1848, when he would be chosen as Vice President to Zachary Taylor. He was selected to balance the ticket as a northerner, since Taylor was a southerner who owned many slaves. However, they would not cooperate; Fillmore would focus on presiding over the Senate rather than working together on policy, and he would fire the entirety of Taylor's cabinet upon becoming President. Their primary dispute concerned a group of bills that would become the Compromise of 1850 (see below), which Fillmore supported and Taylor did not, but after Taylor's unexpected death in 1850, Fillmore would assume the presidency.

His most notable achievement as President is passing the Compromise of 1850, which were five bills written by Whig Senator Henry Clay and Democratic Senator Stephen Douglass (who is most famous for his later presidential run against Abraham Lincoln). It was written to decisively resolve the issue over expanding slavery in the territories, after the previous attempt (Missouri Compromise of 1820) didn't work out too well. Basically, after the Mexican-American War, the United States won large amounts of territory, and while Southerners were excited about the prospect of expanding slavery to the new territories, none of the land was good for growing crops like tobacco and cotton that slave labor made extremely profitable. This became a national issue when California applied for statehood as a free state. During Fillmore's tenure, the United States balanced the number of free states and slave states, and the addition of California would create unequal representation in Congress. The compromise added California as a free state and banned slave trade in Washington, D.C. However, the remaining territories from the Mexican Cession were granted popular sovereignty; citizens within those territories decided to permit or prohibit slavery. Most infamously, the Compromise included the Fugitive Slave Act, which required government officials and even ordinary citizens in free states to assist in capturing escaped slaves. Ironically, this galvanized northerners against the practice. In short, southerners were agitated once they had become a minority in the Senate. Northerners were agitated because they were coerced into supporting slavery; and the fate of people in New Mexico and Utah were not settled.[1]

As we all know, this fully settled the issue of slavery once and for all, and it never became a problem again. Arguably however, the compromise indirectly preserved the Union; it gave time for the North to industrialize. Secession would have been significantly more difficult to combat a decade earlier.

Fillmore's other major achievement besides the Compromise of 1850 was the Perry Expedition.

This involved sending Commodore Matthew Perry to force Japan to open itself up to American businesses with the threat of gunboat diplomacy if necessary. At the time, Japan was one of the most isolated nations in the world, with the feudal Tokugawa shogunate banning all entry from foreigners except for a port in Nagasaki that the Dutch were allowed to use. This was the first major step that would lead to the fall of the shogunate and eventually the Meiji Restoration and subsequent modernization of Japan.

Cuba was another major foreign policy issue that Fillmore faced. Southerners knew it would be an uphill battle to proliferate slavery in the areas acquired by the Mexican cession due to the climate in the western U.S. making plantations unprofitable, many wanted to instead expand to the Caribbean and Central America in order to add new slave states (see the Golden Circle

for one such proposal). Zachary Taylor, however, signed the Clayton-Bulwer Treaty,

which prevented the British Empire and the U.S. from claiming more territory in Central America, which agitated people who wanted to expand there. This resulted in many Americans joining Narciso López's

campaigns to attempt overthrowing the Spanish government in Cuba. In 1850, López and his followers were tried for violating the Neutrality Act,

but they were acquitted by southern juries. After another attempt, López and several Americans were executed by the Spanish. To Fillmore's credit, this could have easily led to war, but he was able to avoid it. However, this just ended up angering southerners who wanted to annex Cuba as well as some northern Democrats who felt he was being too soft on Spain.[2] Ultimately, the U.S. would later end up taking over Cuba during the Spanish-American War. 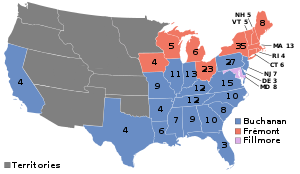 One of the most screwed up elections in American history.

By the end of his presidency, Fillmore was unpopular and especially hated in the north for his enforcement of the Fugitive Slave Act; however, he still had some support in the south for those who felt he was a "compromise candidate". Fillmore, at first was fine with stepping down, as he wanted his friend Daniel Webster,

who was becoming old at 70, to have a chance at the presidency, but Webster ended up dying not too long after, and the more anti-slavery Winfield Scott

ended up gaining most of Webster's votes after his death and consolidated support in the north. The nomination was bitterly divided between Scott and Fillmore among regional lines, while the Democrats had nominated Franklin Pierce, a northerner who agreed with southern views on slavery and thus, was able to unite the two regional factions of the party. Scott won out on the nomination, but was utterly annihilated in the general election, only carrying four states, although the popular vote was a bit closer. Ultimately, this regional divide would cause the Whigs to collapse as a party.[3]

Shortly after he left office, tragedy struck, with his wife dying of pneumonia. He, alongside many of the southern Whigs, ended up joining the nativist Know Nothing Party. Fillmore would receive their nomination in 1856. He rarely spoke about immigration, which was ostensibly the main position of the Know Nothings, but rather talked about preserving the Union. He essentially ran as a compromise candidate again, as he wanted to leave the expansion of slavery into the territories open, unlike the Republican nominee John C. Frémont,

while being more focused on keeping the Union together than the Democratic nominee James Buchanan. His 20% finish is impressive for a third party, but he only won Maryland and ultimately one of the worst presidents ever would win. It's easy to see Fillmore as a spoiler, but the election was deceptively close: if Fillmore had won at least two of Kentucky, Louisiana, and Tennessee and Frémont won Illinois, which would have required less than 25,000 votes to be flipped, then Buchanan would've been prevented from having a majority in the electoral college and the election would have gone to the House of Representatives, where the Democrats were in the minority, which would've changed the course of American history.[4]

Despite wanting his country to be united, his actions led to the fracturing of his party and the resulting elections of two of the worst presidents of all time and ultimately the bloodiest conflict America has ever been in. When the Civil War came, he sided with the Union, but he was not a big fan of Abraham Lincoln and endorsed his opponent George B. McClellan

. He remarried and dedicated the rest of his life to philanthropy before dying of a stroke in 1874.