The Jim Crow laws were state and local laws in the United States enacted between 1876 and 1965. They mandated de jure racial segregation in all public facilities, with a supposedly "separate but equal" status for black Americans. They also imposed legal barriers on who private businesses were allowed to serve,[3] prohibiting black-owned barber shops from serving white clients whether the whites wanted it or not,[4] and requiring apartment buildings to designate themselves black or white,[5] or prohibiting interracial athletic events even if entirely financed and organized by a private party.[6] This led to treatment and accommodations that were usually inferior to those provided for white Americans, systematizing a number of economic, educational and social disadvantages.[7] Jim Crow laws were particularly popular in the South, where southern hospitality could only be enjoyed if one followed the "whites only" or "colored only" signs.

The Jim Crow era only began to end in 1954, when the US Supreme Court ruled that segregation in state-sponsored public schools was illegal in the landmark Brown v. Board of Education decision. The Court under Chief Justice Earl Warren continued to rule against other instances of racial segregation.[8] Meanwhile, the Civil Rights Movement saw activists and black leaders lead a sustained nonviolent struggle against segregation through tactics like sit-ins, boycotts, and protests.[9] The racist laws were finally overruled by the federal Civil Rights Act of 1964 and Voting Rights Act of 1965.

Tragically, the legacy of racial segregation still haunts the United States. Uneven enforcement of civil rights measures and deep-seated cultural biases prevented full desegregation, leading to a situation where housing in thee US is still about as segregated as it was before the Civil Rights Act, with black-majority areas almost universally being poorer than white areas.[10] Without desegregating neighborhoods and addressing longstanding economic inequality, black Americans are and will continue to be suffering under the remnants of Jim Crow.[11] In other words, the long war drags on. 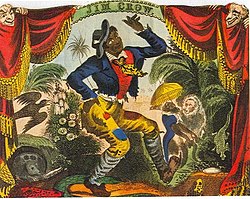 The name Jim Crow is a blanket term which describes the myriad laws enacted in the United States in order to enforce racial segregation. Even before the laws began in full force, the term "Jim Crow" was generally used as an epithet against black people. The name comes from a song by Thomas Dartmouth Rice who performed it in blackface and found enormous popularity across the US and even in London and Dublin.[13] The Jim Crow persona and song became so popular that it basically founded the genre of racist minstrel entertainment.

Jim Crow and other minstrel characters were intentionally portrayed as lazy and stupid for comedic effect, going a long way in perpetuating racial prejudice across the US.[13] The minstrel shows popularized Jim Crow as a pop culture caricature recognized by much of America's white population. When white Americans referred to blacks as "Jim Crow", it was to reduce blacks to the same buffoonish caricature that Rice and other blackface performers showed on stage.

The image became so ingrained in the national consciousness that it came to describe racist laws simply due to the fact that it was how most whites thought of black people.[12] While Rice died in poverty and was soon forgotten, the name Jim Crow came to define an era of racist oppression.[12]

The white mob poses after the coup in Wilmington, 1898.

After Reconstruction ended and President Rutherford B. Hayes withdrew federal troops from the South, white members of the Democratic Party were able to regain their stranglehold on power in the South. Paramilitaries like the White League used murderous violence to destroy local Republican Party organizing and suppress the black vote in order to ensure political victory for the Democrats.[14] In at least one case, there was an outright coup against an elected government when white supremacists a Gatling gun and other weapons to destroy the biracial government of Wilmington, North Carolina.[15]

The Democratic politicians who came to power amid this wave of repression called themselves the "Redeemers", making clear their intention to "redeem" the South from its period of post-Civil War progress towards racial equality.[16] They represented the interests of rich white agriculturalists, the same group of people who had led the disastrous uprising of the Confederate States.

The Redeemer Democrats quickly set about ensuring their continued power by suppressing black and poor voters. Over about a decade after Reconstruction, black people lost their hard-won right to vote in the South through state governments subverting the US Constitution. White mobs used violence to intimidate black people out of voting, and state governments began to pass laws to impose further restrictions. First there was a literacy test, which most black people were unable to pass since it had been illegal to teach slaves to read.[17] The literacy tests were always administered by white officials who would reject black would-be voters even if they clearly could demonstrate literacy. Grandfather clauses were used in certain places to make sure that the literacy tests didn't impact poor whites by allowing people to vote if their fathers or grandfathers had voted before 1867.[17] Since that applied to almost no black people, it again excluded them from the political process.

With the Democratic stranglehold on politics in the South, anyone who won a Democratic primary would be fairly certain of winning office. With that in mind, the Democratic Party and state officials ensured that their primary elections would only be open to white voters.[18] Additionally, officials would routinely purge voter rolls of black Americans and pass laws disenfranchising former prisoners (of whom many were blacks who had been convicted of trumped-up charges).[17] All told, the Southern Democrats had a depressingly effective system in place to prevent black people from doing anything as simple as voting.

Some examples of Jim Crow laws are the segregation of public schools, public places, and public transportation, and the segregation of restrooms and restaurants for whites and blacks. The U.S. military was also segregated. These Jim Crow Laws were separate from the 1800-66 Black Codes, which had also restricted the civil rights and civil liberties of African Americans.

Segregation was officially ended in the US military with Executive Order 9981, which was signed by President Harry S. Truman in 1948. State-sponsored school segregation was declared unconstitutional by the Supreme Court of the United States in 1954 in Brown v. Board of Education. Generally, the remaining Jim Crow laws were overruled by the Civil Rights Act of 1964 and the Voting Rights Act of 1965. 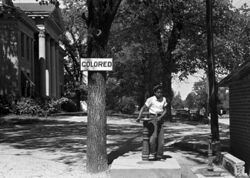 Jim Crow laws were generally not so crude as to deny rights, instead enforcing segregation. In theory, both races would have access to their own versions of the same amenities and services. Buses in Montgomery, Alabama, had separate sections for blacks and whites. The Rosa Parks incident occurred when a black woman, sitting in the "white section" of the bus, refused to give up her seat to a white man. She was legally allowed to travel on the bus, but was not sitting in the area assigned to blacks. The area assigned to blacks could be changed by the bus companies and drivers, so it wasn't uncommon for blacks to be removed from seats needed for white passengers. The laws, and the way in which they were enforced, made a mockery of the notion of equality.

Black schools received less funding than white schools,[19] and laws were enacted in the knowledge that they would disproportionately affect black citizens. One of the iconic images of this era is that of separate water fountains for blacks and whites.

Attempts to stall its destruction[edit]

Since the Southern Strategy and the Reagan era, desegregation of public schools, lead regulations, health insurance equity and poverty relief have slowed down and can be tied to the stagnation of black wages today.[20] The Affordable Care Act is attempting to address at least one of these concerns.[21]

See the main article on this topic: Libertarianism

While libertarians, almost inherently, are opposed to government discrimination, such as Jim Crow laws,[22] their views on the remedy of the Civil Rights Act are mixed. Title II of the 1964 Civil Rights Act prohibited discrimination in public accommodations. Some — but not all — libertarians are opposed to the idea that a privately-owned business can be told by the government that they must serve everyone; according to these libertarians, this is in opposition to the idea of freedom of association for individuals (or corporations — same thing to them apparently).[23] Rand Paul has questioned Title II,[22][24] Peter Thiel has expressed opposition to both women's suffrage (the Nineteenth Amendment in the US) and "welfare beneficiaries"[25] (reasonably interpreted to mean minorities).[26]