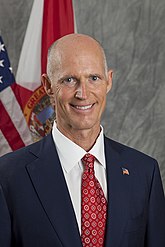 Rick Scott (R-FL) is the current governor junior senator of America's wang, although many would argue he's the taint.

In 1997, it was discovered that his hospital chain, Columbia/HCA, was involved in a kickback- and overbilling-related Medicare fraud, considered the "largest health care fraud in U.S. history".[1] He wasn't prosecuted, but it was so big he should have at least noticed.[1] In 1998, it was fined by the Federal Trade Commission for anti-competitive misconduct.[1]

In 2003, he opened up Pharmaca Integrative Pharmacy, which operates in 5 states and sells herbal, homeopathic and natural "medicines".[1]

Quackwatch discovered he's an investor in and was the first manager of Novosan, producer of the Viosan Health Generation supplements.[1][2]

Florida's program was a tremendous success, actually: It moved millions of public dollars into Rick Scott's pocket. In 2011 he signed a law requiring that recipients of Temporary Assistance for Needy Families funds undergo mandatory drug testing in order to receive benefits. This was met with much ridicule, in that the supposed benefit of saving money not given to welfare recipients who tested positive for drug use was overshadowed by the cost of the tests—which were done by Solantic, a company that Scott started and transferred his ownership shares to his wife. Never mind that 25% of welfare recipients are actually children. (Children of drug users do not need to eat. It is known.)

Scott made it a point to say these recipients of public money were required to be held accountable to the public. In a blatant display of hypocrisy Scott refused to take a drug test as a recipient of public money when asked by The Daily Show.[3]

So, when are we going to start checking for other crimes? It's almost as if there's some kind of stigma associated with welfare...

He's opposed to Obamacare and came up with a thing called "Conservatives for Patients' Rights", managed by CRC Public Relations of Swiftboating fame, which uses scare tactics and deceit against universal health care.[1]

Thus, pressured by the challenges of an aging constituency, Scott flip-flopped several times about expanding Medicaid under the Affordable Care Act. So far, the state House of Representatives has voted against expanding coverage. With no state-level exchange, ACA shoppers in Florida are directed to the federal exchange.

During the 2014 election, he came out in support of the ACA after his mother died without obtaining treatment. In 2015, after winning reelection, Scott promptly turned around and went back to opposing the ACA, because clearly, family is not as important as his career.

After it was discovered that two for-profit hospitals were in gross violation of the state health standards by having a death rate more than three times the national average on pediatric open-heart surgery, the state of Florida "fixed" the problem by repealing state standards. In what is assuredly a bout of amazing coincidence, Scott accepted a $100,000 donation from the company that owns the hospitals.[4][5]

And what special sort of self-serving asshole do you need to be to accept a $100,000 "donation" from a hospital in the first place? Shouldn't it be the politicians donating to the hospitals? Rick Scott's net worth is estimated to be between $83 million and $220 million (!!).[6]

He signed into law an anti abortion bill that cuts off women's access and public funding to health services that provide abortion. It requires doctors to have admitting privileges at a hospital - a type of formal affiliation that can be difficult to obtain. It requires annual inspection of clinics by health authorities and tightened rules on disposal of aborted fetal tissue. This in addition to slashing funding for cancer screenings, pap smears, and birth control. This runs the risk of having HIV and teen pregnancy rates skyrocket because of these regressive laws. [7]

Despite living in the U.S. state most likely to be heavily impacted by anthropogenic global warming through hurricanes and rising ocean levels, Scott has verbally forbidden state employees from using the terms "climate change" or "global warming".[8][9] When asked to comment on what he thinks is responsible for the increase in hurricane activity over previous decades, Scott's response was "I'm not a scientist."[10]