The ozone layer is a chunk of the atmosphere located anywhere between 15 km and 35 km above the surface of the earth. The name is a slight misnomer as the percentage of ozone (an allotropic form of oxygen) in the layer is only a few parts per million; however, over ninety percent of the free natural ozone in the atmosphere is found within this layer. It varies in thickness throughout the year and across the globe.[1]

The most notable effect of the ozone layer is to absorb most of the high frequency ultraviolet light from the sun. This light would be very harmful to most terrestrial life if it reached the earth's surface.

Annual fluctuations occur naturally in the position, thickness and density of the layer. However, it has been affected by man-made chemicals transported into the stratosphere by air currents. Chlorofluorocarbons, which are inert and harmless in the lower atmosphere, and were used heavily for refrigeration and as propellants in aerosols, are long lasting pollutants which form radicals that catalyze the breakdown of ozone.

Ozone depletion and the "ozone hole"[edit]

In the second half of the 20th century, an ozone "hole"[2] has developed above Antarctica each southern spring (August-December), getting larger and lasting longer each year. Technically, it's not a "hole" as such, but a dramatic thinning of the ozone layer. This was caused by chlorofluorocarbons (CFCs), compounds used in air propellants and refrigerants. As a result of this, CFCs have been largely phased out of use. While the hole continued to get larger, the rate at which it did so decreased[3] before beginning to "heal" in 2016,[4] largely thanks to the CFC ban - a great success for the environmental movement.

Can't do any better than quote NASA:

Polar ozone losses are directly caused by chlorine and bromine catalytic reactions. The production of chlorine and bromine reactive species is accelerated by chemical reactions that take place on the surfaces of cloud particles. Laboratory chemists realized long ago that some gases were affected by contact with the walls of reaction chambers. These "surface" reactions modified the results obtained for a pure gas reaction with another gas. In an identical fashion, it was realized that the surfaces of individual cloud particles could enable reactions that otherwise would not take place in the stratosphere. As the stratosphere cools to very cold temperatures over the Antarctic during the southern winter, polar stratospheric clouds (PSC's) form. Forms of chlorine (HCl and ClONO2) that do not affect ozone can react on the surfaces of these PSC's and produce chlorine products that can catalytically destroy ozone. These chlorine and bromine catalytic destruction reactions are so fast that all of the ozone over Antarctica between 12 and 20 km is destroyed within a few weeks during the September (Antarctic spring) period.[5]

Global warming and the ozone layer[edit]

Because of global warming, the troposphere has been warming while the stratosphere has been cooling due to the greenhouse effect (i.e., the heat is trapped in the lower atmosphere due to increased carbon dioxide levels). This change in temperature affects the movement of air, speeding it up in some areas. Due to this, less ozone may be produced in the stratosphere, leading to a larger ozone hole.[6][7]

Although various hypotheses about ozone depletion already existed at the time, the first piece of research suggesting a specific link between CFCs and ozone depletion was published by Mario Molina and Sherry Rowland in 1974.[8] Molina, Rowland, and Paul Crutzen were awarded the 1995 Nobel Prize in chemistry for their work on ozone depletion.[9]

However, it was in the 1980s, when the ozone hole over the Antarctic was discovered, that oil and other companies responsible for aerosol emissions mounted a denialist campaign. Perennial experts for hire S. Fred Singer and the crew at the George C. Marshall Institute provided "expert" testimony before Congress, penned op-eds decrying the ozone "alarmists," and cooked up their own "research" in think tanks.[10] 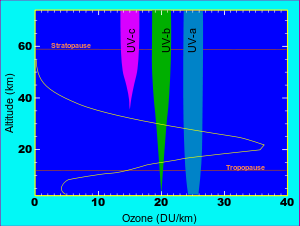 (The Dobson Unit (DU) is a measure of the "thickness" of the ozone layer.)