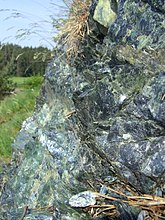 Serpentine as observed in nature.

Asbestos is a type of metamorphic mineral group that falls into two classes, serpentine and amphibole. Serpentine has a single chemical in its class, chrysotile ([Mg3Si2O5(OH)4]n). Amphibole has five chemicals in its class:[1]:220

Asbestos was used for thousands of years for various things, such as construction and pottery, although large-scale mining didn't begin until the 19th century. It became desirable as a building material because of its low cost, resistance to fire and acid, and sound absorption. Interestingly, asbestos is all natural.

Despite being a cause of lung cancer[1]:294 and various other diseases,[2] and despite thousands of years of people's personal observations, asbestos was not known to be dangerous until scientific studies were done on its health effects in the 20th century.[3][4][5] As a result of these advances in science, regulations have phased out asbestos as a construction material in many countries.[1]

The mechanism of carcinogenicity for asbestos is frustrated phagocytosis, i.e., the inability of a phagocyte to engulf its target.[1]:284-290 Basically, when an unfortunate person inhales asbestos dust, microscopic mineral fibers become trapped in their lungs and cause inflammation, scarring, and eventually genetic damage to the body's cells.[6] This damage leads to the development of lung cancer, most worryingly an especially aggressive form called mesothelioma. This mechanism likely also applies to other similarly-shaped, biologically-inert substances such as nanotubes and nanowires that meet the same length threshold for pleural retention of 5 µm as asbestos does.[7]

Mesothelioma is an extremely aggressive variant of lung cancer, and an estimated 80% of cases are caused by asbestos exposure.[8] Depending on when the cancer is detected, life expectancy ranges from 12 to 21 months, and most patients only live about a year after detection.[9] The most effective method of preventing this horrible disease is this: don't fucking mess with asbestos.[citation NOT needed]

See the main article on this topic: Denialism

The danger of asbestos is sometimes erroneously claimed to have been known to the ancient Romans.[5] The danger of asbestosis to workers was correctly recognized as early as the 1900s, and insurance companies began to take notice in the 1930s.[11] The carcinogenicity of asbestos in humans was suspected since 1935 and was firmly established in 1955 by Sir Richard Doll.[12] Nonetheless, the asbestos industry attempted to cover up the risks of asbestos into the 1970s[13] (sounds familiar, doesn't it?). There is still the rare crank who denies the health hazards of asbestos, such as journalist Christopher Booker. 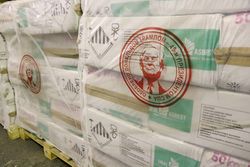 In 1979, Donald Trump hired a demolition contractor to take down the building at the future Trump Tower site.[17] The contractor used illegal, non-union Polish workers who were exposed to asbestos.[17][18] In his 1997 book, The Art of the Comeback, Trump denied that there was any association between asbestos exposure and cancer, stating "I believe that the movement against asbestos was led by the mob, because it was often mob-related companies that would do the asbestos removal. Great pressure was put on politicians, and as usual, the politicians relented."[19][20] Ironically, it was Trump's hiring of organized crime-controlled companies that enabled his demolition contractor to hire the illegal workers that were exposed to asbestos.[17][21] Trump pushed asbestos denialism in 2018 via his EPA director Scott Pruitt, who announced that the EPA would cease evaluating asbestos hazards in the environment.[19] This is some four decades after the last known time that the asbestos industry itself engaged in denialism.[13] Asbestos hazard denialism, with the aid of Trump, also seems to be alive and well in Russia; in 2018 a Trump-branded asbestos being produced by a Russian asbestos company backed by Vladimir Putin appeared.[22][23]

In traditional Chinese medicine, asbestos is used (including in powder form) for treating impotence, spermatorrhea, premature ejaculation, colic, muscle cramps, prostatitis, and endometritis.[24][25] It is also used for kidney "warming" and yang fortifying, whatever that means.[25]

Asbestos has been used in Ayurveda and is known as kousheyashma. One analysis of traditional medicines found it in formulations at up to 25%.[26]

Asbestos has been used by crystal healers like just about every other mineral. While many practitioners claim asbestos draws "negative energy" or something similar to explain why asbestos is bad when every other crystal is good,[27] there are nonetheless still people who advocate its use in crystal healing.[28]