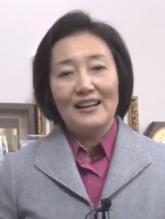 Park Young-sun (박영선) (1960–) is a major politician of the Minjoo Party of Korea. She has been constantly criticized by LGBT rights groups for her extreme homophobic beliefs. However, by Korea's political standards, which have strong tribalist logic, she is considered to be more left-wing than Keum Tae-sup, who is closer to social liberalism because of her party affiliation and pro-Moon standards. She is recognized as a centrist liberal politician in South Korean politics.[2]

She turned a blind eye to Korea's poor sexual minorities' human rights issues, thinking that the entire sexual minority is abnormal and contrary to nature's regulations. Therefore, she is a representative Minjoo Party politician who opposes anti-discrimination laws.

However, in recent years, the Minjoo Party has broken with the pro-Moon faction, and is classified as non-Moon by criticizing the president. In fact, she is also extremely anti-Islamic.[3] Minjoo Party supporters still seem to recognize Park Young-sun as progressive and Keum Tae-sup as conservative (by European standards, Keum Tae-sup, will be seen as a relative liberal centrist and Park Young-sun as a Christian fundamentalist right-wing).

She was the Minjoo Party nominee in the 2021 Seoul mayoral by-election. She lost to Oh Se-hoon, a member of the right-wing People Power Party.

This politicians-related article is a stub.
You can help RationalWiki by expanding it.
Retrieved from "https://rationalwiki.org/w/index.php?title=Park_Young-sun&oldid=2452709"
Categories:
Hidden categories: