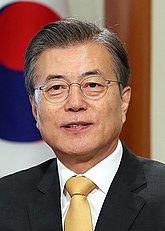 Moon Jae-in (Hangul:문재인, Hanja文在寅, born 24 January 1953) is a South Korean politician who served as the 19th President of South Korea.

He was born a poor farmer in Geoje County, South Gyeongsang Province in 1953. In 1972, he entered Kyung Hee University, a prestigious university at that time.

He was drafted into the Army in August 1975 and served as a special forces officer for three years.

After his discharge from the military, he returned to Kyung Hee University, where he later jumped into pro-democracy movements and human rights lawyer activities.

Actions as President and political positions[edit]

He is a liberal politician and considers himself a feminist, and he has implemented policies reflecting this, including the implementation of a law curbing violence against women and supporting women in prostitution. He fully legalized abortion in 2019. However, some regard him as a discriminatory politician. In particular, men in their twenties think it is sexist of him to not subject women to conscription.

He is a former official in the liberal regime of Kim Dae-Jung (1998-2003), and Roh Moo-hyun (2003-2008). His government has pursued the Sunshine Policy, or reconciliation with North Korea. For this reason, some conservative politicians attack him as a communist.

However, he is not liberal on the issue of sexual minorities. He opposed homosexuality in the military, but at the same time stated that there should be no discrimination based on sexual orientation.[1][note 1] and The disability policy promoted by Moon Jae-in is quite conservative and has no difference in maintaining the status quo, so it is receiving criticism and concern from human rights organizations.[2]

He has called for income-led growth and espoused support for a social market economy.[3]

However, not all of his policies have yielded the results that were hoped. To name some examples, his government has launched a series of minimum wage hikes. One of these was in 2018, which raised the minimum wage by 16.4% from the previous year to 7,530 won ($6.65 USD) an hour.[4][5] The income of the lowest 20% of earners fell by 3.7% in the second quarter of the year the increase was implemented compared with the same period last year.[5]

The maximum hour work week was reduced from 68 to 52.[6] In October 2018, a study conducted by a telecommunications firm found that in central Seoul the amount of time people spent in or near their workplace fell by 55 minutes, and time spent of leisure activities went up in residential areas.[5] However, they found little to no change elsewhere in the country.[5] Bars and restaurants in central Seoul reported a loss in business.[5] Many working-class Koreans, who rely on temporary work, also complained that because overall pay was not adjusted for the lower working hours, they took up more work to compensate.[7]

Although Moon Jae-in insisted on a reforming welfare policy, South Korea's social expenditure versus GDP is still among the lowest in the OECD.[8] This can be seen as one reason that Moon Jae-in is closer to a centrist politician than a liberal politician. (see South Korea#Poor welfare and labor right)