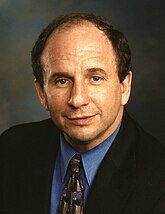 Paul Wellstone (1944–2002) was a United States senator from Minnesota, serving from 1991 until his death in a plane crash in 2002. A Democrat, Wellstone consistently ranked as one of the most liberal Senators. He was one of only a handful of Senators to have voted against military action in Iraq in both 1991 and 2002. Wellstone toyed with a presidential candidacy in 2000, but ultimately declined to join the race and endorsed Bill Bradley instead.

Wellstone's Senate seat was up for election in 2002, and the contest pitted him against Republican challenger Norm Coleman. Eleven days before the election, Wellstone, his wife, and one of his children were killed in a plane crash. He was hurriedly replaced on the ballot by fossilized former Senator and vice presidential candidate Walter "Where's the Beef?" Mondale. Despite not being on the ballot for the election due to, well, death, the election has an interesting place in Wellstone's legacy.

A widely-publicized memorial service for Wellstone was held before the election, with 20,000 people in attendance and national TV coverage. One of the speakers at the service, Rick Kahn, used his eulogy to openly campaign for a win "for Wellstone!", igniting controversy and causing a backlash against the Democrats amid accusations of politicizing a funeral (even though Paul Wellstone was, himself, a very outspoken politician). Then-governor of Minnesota, Jesse "The Body" Ventura, even walked out in disgust during the speech (even though many believe that he, himself, was just playing politics).

Right-wing talking heads jumped on the political undertone of the memorial service, and exploited it for political gain by accusing Democrats of (get this) using the memorial service for political gain. As a result, the Democrats had allowed themselves to be put in a tight spot, and wound up doing a poor job of explaining the politically liberal undertone of the memorial service (which was that Wellstone was, himself, an outspoken liberal). As a result, prior to the service, Coleman was behind 8 points in the polls, but he wound up defeating Mondale in a close election, 50%-47%, actually winning a Senate seat for the Republicans (as opposed to "winning").

Rick Kahn has been vilified for his role, but is still active in Minnesota politics. He keeps a low profile though.

According to an NTSB investigation, numerous pilot mistakes were solely to blame for the crash that killed everyone on the plane carrying the late senator.[1]

Unfortunately, the circumstances surrounding Wellstone's death have become fodder for conspiracy theorists,[2] who attribute his death to being revenge from Dick Cheney for voting against the invasion of Iraq.[3]

For some years after Wellstone's death, stenciled graffiti occasionally appeared on a Minneapolis sidewalk: "Who Murdered Wellstone?"