Dr. Benjamin Solomon "These Hands"[2] Carson, Sr. (1951–) is the self-admittedly unqualified[3] former Secretary of Housing and Urban Development, a retired American pediatric neurosurgeon who was a 2016 presidential candidate and subsequently kissed the ring of power. When he was a practicing physician, Carson invented techniques that had previously been thought impossible (such as being the first to separate twins conjoined at the head). On the other hand, Candidate Carson had a yen for incredibly stupid pronouncements, some of which contradicted science at the base of the medicine he practiced. He's retired. What the hell else is he going to do? Before he decided to run for President, he considered taking up organ lessons. Not human organs. The pipe organ.[4]

Carson is a perfect example of how earned credentials do not necessarily imply the current use of scientific rigor or intellectual honesty. He certainly displays some narcissistic features and soft-spoken insanity; however, he's also caught up in that GOP bubble where facts are irrelevant, but faith and appeals to magical thinking define him as some kind of upstanding man of God.[5]

Between Carson and Trump, it was simply amazing to watch these two in real-time.[6] He eventually joined Trump's transition team as Vice Chairman. Carson was later offered the position of Secretary of Housing and Urban Development (see spoils system). Carson was an excellent pick because he fought for the right to discriminate against people who look like Carson.[7]

Where did they dig him up?[edit]

Carson on the set of General Hospital in 2007.

He is America's most famous brain surgeon, although whether he is the 'best' is debatable. Judging by the 8+ lawsuits filed against him, it's likely he's also one of the boldest surgeons—one who took on a lot of surgeries that other doctors wouldn't touch because they were deemed unethical interventions. He was okay with a few of them ending horribly wrong because he saw it as "God's will" and not any fault of his own.[9][10] So yeah, he had a few extraordinary successes to his name that most others didn't, but how much of that is genuinely superior skill and how much is just playing the odds in ways that most surgeons would deem unethical? Dr. Carson also did research on fetal tissue and then wrote papers about it. Almost as though his belief in the sanctity of the fetus is an utter sham.[11]

From 2004 through 2013, Carson touted quack treatments in the form of "glyconutrient" products manufactured by Mannatech, a multilevel marketing company. Mannatech claims that the supplements can treat everything "from cancer to multiple sclerosis and AIDS." Mannatech and its similar predecessor company have been the subject of (yet more) lawsuits.[12]

He attracted the attention of the Republican Party after making a variety of wingnut statements at the 2013 National Prayer Breakfast hosted by President Obama. Carson himself claimed no political affiliation, commenting that "If I were part of [a political party], it would be called the Logic party, and it would be dedicated to commonsense approaches we all should be able to see."[13] In November 2014, he joined the Republican Party, hinting at the possibility of running for President in 2016.[14] On May 4, 2015, Carson announced his candidacy for President.

Carson is clearly averse to criticism, as evidenced by him and his supporters actually believing that all the recent revelations about his fictive past are nothing more than an intentional hit job by the libtard media bent on destroying him[15] because, in his mind, he represents a direct threat to secular America.[16][17]

On May 10, 2015, Carson expressed his ignorance of the law on Fox News Sunday, the premier venue for such expressions, saying that the Supreme Court's power to review laws passed by Congress needs to be revisited.[18]

In August, Carson admitted to using fetal tissue in his medical research during the 1990s, but then he apparently also claimed that fetal tissue was worthless for medicine, shouldn't be banned for research, and shouldn't be taken from abortions at Planned Parenthood.[19]

He's been criticized for his violent past, immortalized in Death Wish VI a book about his exploits, and therefore is unfit for the presidency. Charlatan or vigilante? He's sort of damned either way, really.[20][21] Because this is the 2016 Republican primaries, where logic is forbidden, rather than his opponents using this to claim he shouldn't be President, the problem arose that it might not be true.[22] What commenced was a candidate desperately trying to convince the world he did, in fact, have a violent past while his opponents tried to prove he didn't. You'll recognize this as the exact opposite of how things are supposed to work. 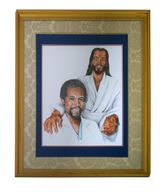 Carson is a Seventh Day Adventist. Seventh-day Adventism necessitates a belief in young Earth creationism. Carson has said he made the decision to be baptized in the church at the age of 8. He says that at the age of 14, he spent three hours in the bathroom reading the Bible and praying after he tried to stab someone with a camping knife[note 1], which supposedly broke after hitting a belt buckle. Carson claims he left the bathroom a different person — with no temper.[25] But on the campaign trail, he turned a blind eye to his church's teaching of pacifism to appeal more to Republican hawks.[26]

He does not believe in the separation of church and state. He engages in the usual historical revisionism to justify his belief, saying that the Constitution was never intended to mean "separation of God and state".[27] Exactly how, as chief executive, he would go about putting God back into America is left unexplained, but we do have some hints.

Like many Christian fundamentalists, Carson does not believe in Darwinian evolution, which he claims rests upon "incredible fairy tales."[28] He believes that no transitional species have ever been discovered and considers the human brain (with its billions of neural connections) evidence for an Intelligent Designer. Further proof that Carson leans heavily on scripture is his notion that religion is needed to test scientific theories because "maybe the science is just propaganda".[29][30] At least one of Carson's policy positions is based on a literal interpretation of the Bible: his tax plan. He explains, "What we need to do is come up with something simple. And when I pick up my Bible, you know what I see? I see the fairest individual in the universe, God, and he's given us a system. It's called a tithe". Carson advocates a universal flat tax for citizens, where 10 percent of income is paid in taxes.[31] Carson's Biblical tax plan has been roundly criticized since any flat tax rate would need to be well above 20 percent to keep the government running without sweeping budget cuts.

Although he was affiliated with no less than three of the United States' most prestigious universities from 1969 (when he commenced his undergraduate studies in psychology at Yale) to 2013 (when he retired from the faculty of Johns Hopkins), the attribution of an etching of Proverbs 22:4 in his living room is misspelled as "poverbs."[23] One would be inclined to assess this as a rather conspicuous oversight when juxtaposed against his professed faith and election to the University of Michigan chapter of the selective Alpha Omega Alpha medical honor society... but to paraphrase Robert Towne, forget it, Jake.

It's impossible to narrow it down to a single moment because the man was the complete package. His general sleepiness and aloofness. Getting lodged in the debate entry tunnel like a deer in headlights. Flying home to Florida for a change of clothes.[32] His many great quotes ("The fruit salad of their life is what I will look at."[33] "Popeye's organization."[34] "I was trying to kill somebody."[35] "Can somebody attack me, please?") His laughing at his own jokes. His painting of himself with Klingon Jesus.[36] Not to mention he has an ASMR-inducing voice, possibly putting himself to sleep.

The fact that he still has so much support, and was actually leading in Iowa for a while, must have been astounding for a man who got into the whole thing to sell books (available in paperback!) and raise his speaking fees.[37]

Carson's candidacy reveals the extent to which an individual can demonstrate remarkable smarts and skill in one field while still being able to come across as an idiot. Some choice pronouncements that call Carson's basic intelligence into question include:

After months of relative obscurity among lower-ranked Republican presidential contenders, Carson was unexpectedly thrust into the spotlight in late October 2015 when Iowa polls briefly showed Carson outdistancing front runner Donald Trump by a slight margin. The most often asked question among pundits was "why?", although most political analysts attributed Carson's rise to conservative Christian voters who saw the Bible-quoting candidate as their (literal) salvation.

However, the gentle but weird Carson -- prone to spouting conspiracy theories, anti-science gaffes, and linguistic puzzlers -- did not do well in the glare of sudden media attention. Carson's political stock started its decline on November 13, 2015, when voters began seeking someone who could keep them safe from terrorism in the wake of the Paris Massacre. Within a few days, a New York Times article revealed the true extent of the problem:[68]

By the end of December, the fickle religious voters' affections had swung to Ted Cruz, and Carson had dropped from first place to second, then third. In February 2016, he'd slipped to fourth place, with the inevitable exodus of campaign staffers and advisors quickly following.

After a dismal performance on Super Tuesday, Carson more or less ended his bid for the Republican Presidential nomination on March 2, saying that he "saw no path forward" and would not bother to attend the next scheduled Republican debate. Carson's characteristic lack of clarity prompted the New York Times to observe, "By not declaring definitively that he is suspending or ending his campaign, he can continue to raise money."[69] He officially ended his campaign on March 4, 2016, saying he intended to chair a group "focused on getting out the Christian vote in November."[70]

On March 11, 2016, Carson announced he was endorsing Donald Trump for President. Trump promised that "I'm going to have Ben very involved with education, something that's an expertise of his."[71] Carson's failed presidential candidacy seemed to have little effect on his habit of issuing a steady stream of bizarre opinions and oddball pronouncements on just about everything.[72][73]

you know he isn't picking anyone for their skills. (According to Carson, it's because he owned a house in an urban area.)[74] Carson himself admitted that he is not qualified for a cabinet post in the Trump administration; he was supposedly offered and declined Secretary of Education, Veteran's Affairs, and Health & Human Services—and two of those positions are related to the health care field. His field.[75] So it makes perfect sense to keep trying to put Carson into a different role. After all, promises were made on the campaign trail that Trump couldn't really renege on.[76]

An audit of the HUD found $500b in irregularities. Ultimately, this did not mean that they found $500b in misplaced dollars, just that someone filled out paperwork wrong. The audit found only $40m in misplaced dollars. Fox took this news and credited it to Ben Carson, neither understanding what the story meant nor that the audit was completed before Ben Carson was appointed secretary of the HUD. The usual snowball trash fire.[77]

See the main article on this topic: Nepotism

The HUD Inspector General's office warned Carson that he appeared to be using his public office for his family's private gain. Specifically, he went on a "listening tour" in Baltimore in 2017, where he allowed his son, Ben Jr., who is the president of a Maryland construction company, to plan the event. HUD records indicate that Carson allowed his son top-level access to the department and other cabinet-level officials. HUD records also suggest that Carson Jr. directly recommended companies to the department. Department officials recommended that Carson leave his son out of the tour for the appearance of propriety; however, he overruled them.[78]