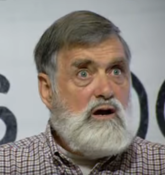 Pastor John Lewis.
Not to be mixed up with the much better John Lewis

Pastor John Taylor Lewis III (1944–2020)[1] was a hard-line independent Baptist minister from who ran the Old Paths Baptist Church, a small farm-based church in Campbellsburg, Indiana.[2][3][4][5] Lewis broadcasted his church services on his program "The Black Brigade" using a variety of shortwave radio stations in the United States from 1998 to 2007. His ministry was virulently anti-abortion and homophobic, prone to such stunts as driving a kook bus covered with graphic pictures of aborted fetuses to highway intersections while yelling at passers-by holding signs saying "God hates fags."

Activist groups noticed Lewis' programming on shortwave radio and were not pleased.[6] Lewis reveled in the publicity provided by his detractors, and taking advantage of the mostly uncensored nature of private shortwave broadcasting in the US, spewed his venomous screeds for several years before completely disappearing.

Hundreds of hours of his radio show recordings exist, and many reveal the true beliefs of radical independent Baptist theology.

Pastor John Lewis was the subject of much debate in alternative media. In 1998, shortwave station WBCQ

began broadcasting with a strong free speech stance. "The Black Brigade" was among the earliest programs on WBCQ. WBCQ also broadcast other odious programs such as "The Overcomer Ministry" with Brother Stair and William Luther Pierce's "American Dissident Voices". Pierce's program was almost immediately permabanned from WBCQ after refusing to soften their genocidal rants, but Lewis and Stair continued their anti-homosexual venom unabated. In addition to WBCQ, Lewis broadcast on a variety of US shortwave stations, including WGTG and WWFV (now WWRB

In December 2003, Lewis noticed that trolls on the internet were among his listeners, and read "The Pastor John Lewis Drinking Game" from a Usenet post on his radio show to much audience amusement.[16]

Lewis hated megachurches, televangelists, and especially Pentecostals, condemning their "tongues babblin' fallin' on the floor" rituals as heresy, ridiculing the obesity of some Pentecostal pastors, and having his followers carry around giant posters of walking pigs emblazoned with their names.[17][18]

Lewis left shortwave radio around 2005 and broadcast on the internet for a couple of years, using various low budget services. His last internet shows in 2007 used a website run by Richard Palmquist,[19] a blowhard who was involved with setting up Family Radio with Harold Camping in the 1960s.[20]