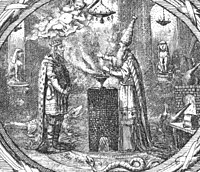 The elusive Philosopher's stone is believed to be the object of medieval alchemists' quest for the transmutation of base metals such as lead into gold. We now have the science and even the technology to achieve this sort of thing,[1] though it costs rather more to build and operate than the difference in price between lead and gold.

The phrase "Philosopher's stone" may also be used to refer to any general goal that is currently unattained but if achieved, would allow for major breakthroughs in science/energy-production/wealth-accumulation/etc.[2] It can also be a metaphor for enlightenment and reaching the pinnacle of human abilities.[3]

Interestingly enough, Asian Taoist philosophers spent a lot of effort seeking the elixir of life in a quest for immortality. Viewed from a great distance, the two are not dissimilar. Another close analogue would be the wish-fulfilling jewel Cintamani, featured in Hinduism and Buddhism.[4]

This pseudoscience-related article is a stub.
You can help RationalWiki by expanding it.
Retrieved from "https://rationalwiki.org/w/index.php?title=Philosopher%27s_stone&oldid=2137681"
Categories:
Hidden category: