Lead, symbol Pb, known as plumbum in Latin, is a heavy metal. It is element number 82 in the Periodic Table. It is the heaviest element that has stable isotopes. Ingesting it causes numerous neurological problems,[1] hence it has slowly been removed from everything it used to be used in.[2] European Union ROHS (Restriction of Hazardous Substances Directive) standards now prohibit its use entirely, meaning that the Chinese have to put all their lead in US-bound toys, toothpaste and Soylent.

Inorganic lead compounds as well as lead subacetate, lead chromate, and lead phosphate are carcinogenic in animal studies; there is insufficient information to evaluate lead carcinogenicity in humans.[3] Lead can cause a wide range of health problems in humans from both acute exposure (e.g., constipation, memory loss, loss of appetite) and chronic exposure (e.g., forgetfulness, depression, high blood pressure, heart disease, kidney disease and infertility).[4] In children, it has been estimated to cause 600,000 new cases of intellectual disabilities each year worldwide.[5] Worldwide, it is estimated to cause 143,000 deaths per year.[5]

Various writers in ancient Rome considered lead to be a poison, either explicitly or implicitly, including Pliny the Elder, Dioscurides, Galen, Celsus and Vitruvius (80–70 BCE); it was Vitruvius who described lead plumbing specifically to be unhealthy.[6] The epidemics of saturnine colic (17th century) and Devonshire colic both lasted for decades, the latter of which was only recognized by George Baker in 1767 as being caused by lead ingestion some 70 years after it was first recognized as a disease.[7] Lead use and concomitant poisoning of lead workers increased mark Industrial Revolution.[7] The toxic effects of lead in workers were recognized by science in the 19th century, and the first laws regulating lead exposure in the workplace came about in the UK in the 1870s-1880s.[7] The first documented poisoning from lead paint ingestion was in 1914.[8]:11

"Lead" in pencils is not the metal lead but in fact a combination of non-toxic graphite (a form of carbon) with a binder of non-toxic clay.

(KKI) has been a pioneer in the area of research into and treatment of lead poisoning since the 1940s.[8]:9 In 1991, KKI embarked upon what would become a controversial study, known as the Baltimore Lead Paint Study, into the health effects of lead and into the effectiveness of lower-cost lead abatement techniques. The study recruited low-income families who were mostly African American to live in lead-contaminated properties and partially-abated properties using different techniques. The study included 140 children in 107 properties. After the study was completed, many of the children had permanent neurological damage. A class action lawsuit was filed against KKI in 2001 and has not been resolved as of 2018. Since the study did not benefit the children who were the subjects of the study, but theoretically would have benefited other low-income children in lead contaminated housing, it has been argued by the plaintiffs that the study violated ethical research standards, including adequate informed consent.[9][8]:168-231 The court in the class action suit went so far as to argue that the KKI study presented "similar problems as those in the Tuskegee Syphilis Study… the intentional exposure of soldiers to radiation in the 1940s and 50s, the test involving the exposure of Navajo miners to radiation… and the secret administration of LSD to soldiers by the CIA and the army in the 1950s and 60s."[8]:2 The court also said that the study defied aspects of the Nuremberg Code. 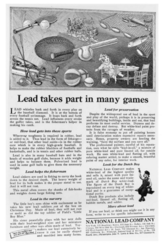 National Lead Company, advertising the use of lead in children's toys in 1923

By the 1920s, lead in paint became widespread in the US. This was not by necessity but for profit because relatively safe zinc-based paints were widely available in the 1920s and titanium-based paints were available by the 1930s.[8]:8 Starting at this point in time, lead-based paint became the primary vector for lead poisoning in children, with lead included in a myriad of toys as well as lead-painted home walls.[8]:8 In 1928, the Lead Industries Association (LIA) was formed to lobby for use of lead pipes in plumbing among plumbers and plumbing code writers.[10] The LIA also downplayed the hazards of lead.[8]:29 In 1949, Maryland passed the first law to prevent lead poisoning in children, the Toxic Finishes Law.[8]:31 This had become necessary because Baltimore had one of the highest rates of poisoning.[8]:6 The LIA lobbied Maryland officials and had the law repealed in 1950.[8]:32 the LIA had argued that the law was an unnecessary burden on lead-based manufacturers, and that the best means of minimizing lead exposure was educating parents.[8]:32 In 1950, the LIA also knew that lead exposure was a growing problem for the industry and had a growing collection of privately-held research into lead hazards.[8]:32-33 The lead industry has in fact been engaging in a coverup, a form of denialism, by simultaneously privately researching and understanding the hazards of lead while publicly trying to minimize the perception of their hazards.[8]:29-33

was used as an additive to gasoline from the 1920s until the 1980s phase-out in the United States.[11] It was phased out in other countries at different times, but as of 2017 it was still in use in a few countries.[12] Its contribution to pollution of the air and soil in cities and around motorways, combined with its incompatibility with catalytic converters, caused it to be phased out. 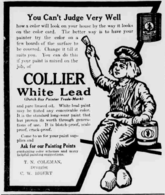 Spreading the toxicity around

Lead was used in paint since the time of the ancient Romans (4th century BCE), and the process of making the paint was described by Pliny the Elder. In the United States, it has been banned from household paints since 1978 due to its toxicity.

Lead and tin are used in molybdomancy, a type of divination involving pouring molten metal into water.

In traditional Chinese medicine, lead is supposed to be good for detoxing (you read that right), malaria, ringworm, skin rashes, rosacea, eczema, sores, ulcers, and killing intestinal parasites, among other things.[13] It's also used in unani and Ayurvedic medicine.[14] Lead was also used as medicine in ancient Rome.[6]

Lead is also used around the world as a folk remedy for things like upset stomach, constipation, diarrhea, vomiting, colic and teething.[15][16] Ironically, lead was known to cause colic since 1767.[7]

is still used in some parts of the world. It is sometimes made with stibnite (Sb2S3), and sometimes made with lead (galena or PbS). Kohl that is not made from lead is usually considered of lower quality. Composition of lead-based kohl can be as high as 84%.[17][18] A 2009 review article concluded that cosmetic use of kohl is "likely to be more theoretical rather than a practical health hazard."[14]

Quite possibly the most widespread use of lead today in the US is in the form of the lead sulphate (PbSO4) electrodes that are a crucial component of wet-cell batteries, which thanks to this use, are known informally as "lead-acid batteries", of the type found in many cars. Lead acid batteries have many advantages, among them their dirt cheap base materials, but are increasingly replaced due to their downsides like high weight and low energy density. During the Great Depression, 59 poor African Americans were poisoned after burning the casing from lead-acid batteries to keep warm.[8]:30

Because it's soft, dense, and relatively cheap, it's good for making bullets.

It's also used for those little weights they add to your wheels whenever you get new tires, to balance them.

It is/was also used for those other little weights attached to fishing lines to pull the bait and hook down into deeper waters.

Because of its density (and cheapness), it's great for shielding against radiation.

The Romans made their pipes out of lead, thus "plumbing". While new lead plumbing is not produced anymore some pipes made of lead are still in the ground or old houses. While this usually does not cause problems due to a protective coating on the inside of the pipes, if the chemical properties of the water change and attack the coating, lead may leach into the water causing tremendous long term damage to all who drink the water. This is what happened in Flint, Michigan, after the water source was switched to the Flint River.

Romans also used lead as an artificial sweetener. Really, it's a wonder they survived as long as they did.[19]

At least 98% of lead in use today gets recycled, more than any other non-alloyed metal.

Despite its name, "pencil lead" has never been made of lead; it was at one point made from a form of graphite that was mistaken for the metal. They are instead graphite (crystalline carbon, once called "Plumbago") bound together with a little bit of clay. So anyone who cautions you about contracting lead poisoning from pencils is someone you probably don't want to take advice from in other areas.