The biggest landmass that continues to smugly elude human settlement.

On the Dentyne Ice chewing gum commercials, they would always say, "Nothing's Colder Than Ice".[2] And that is definitely the truth as there's nothing in the universe that's colder than solid water, not even liquid nitrogen. But, ice is what covers most of the continent of Antarctica. So it is a super-duper cold place.

There have been times when the interior of Antarctica got so cold, that if dry ice were placed outside, it would stay frozen for the duration of the cold snap.

It wasn't always so icy. In fact, 50 million years ago it was a green continent filled with marsupials similar to Australia. However, as South America continued to move southward, it eventually interupted a warm current that circulated around Antartica, starting off a slow but self-sustaining process that turned the continent into the glacial wasteland we all know and love.[3] Strangely, the continent is starting to become green again, but this time as a result of algae blooms caused by climate change. (They tell you not to eat the yellow snow, but it's probably not a good idea to eat the green snow either.)[4]

No one really wants to live there, except several hundred scientists[note 1] and thousands of penguins, who would rather be there than anywhere else. And, of course, Nazis, according to some conspiracy theories. And Iron Sky. (See New Swabia.) Antarctica is the most educated continent because everyone living there that can get a college degree has a college degree. 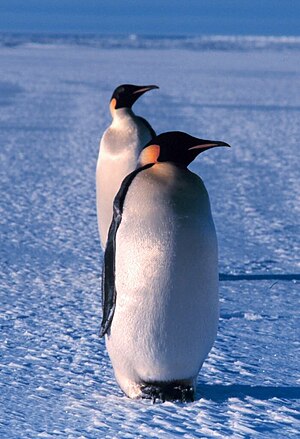 In this case it is somewhat ironic that the very countries and institutions which deny the existence of global warming are using its consequences to further the process which generated the warming in the first instance. (There is also a similar situation with the de-icing of the Arctic, Arctic shipping lines and the resources under the Arctic continental shelves.)

The Antarctic has a unique though limited ecosystem with no land dwelling mammals. In fact, the largest completely terrestrial animal on Antarctica is a half-inch long "wingless fly." Penguins, though cute, do not count; they spend much of their time in the water nearby.

Antarctica is a major source of rocks from Mars because they fall on an enormous ice-covered plain, and are conveyed by means of a very slow "conveyor belt" of moving glacial ice to be deposited at the edge where the flow is obstructed by hills and mountains. The rocks stand out on the flat, white surface.[9][10] 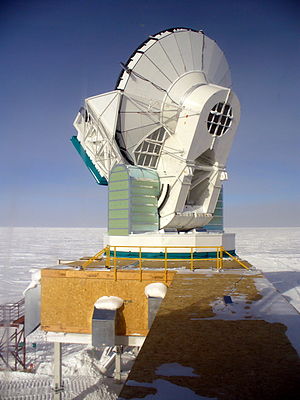 The South Pole Telescope is a dish antenna.

A somehow puzzling, but persistent view among some Planet X/Nibiru believers is that it can only be seen from Antarctica and/or the South Pole, because "it's approaching Earth from below the ecliptic". (Even if this were true, it would be visible from every point south of the equator, not only from the South Pole.) As a result, many obsessively watch the live webcam feeds from various Antarctic research stations, trying hard to find anomalies such as inconsistent sunrise times or strange objects in the sky, often with hilarious results. (See the Neumayer Station article for some examples.) Another facet of the belief is the dark significance some give to the South Pole Telescope

, despite the fact that it is a radio telescope and doesn't produce pictures in the visible light spectrum. And no, it's not owned by the Vatican.

Lake Vostok (Russian: озеро Восток; English transliteration: ozero Vostok) is the site of a drilling project by the Russians, an attempt to break through the thick layer of ice on the lake surface to see if there is life within that has been isolated from the rest of the world for millions of years. There has been some low-level speculation that alien life could have been found, and that it was being kept secret. The lake has turned out to be lifeless so far.[11]

A rather odder claim is that a US spy satellite found a spaceship under the ice in 2001, and the Americans have been hushing it up ever since. Attendant stories of a vanishing film crew, and an erupting "time vortex" simply add to the confusion - while also subtracting from the original story's credibility.[12]

There are also some nutty theories about pyramids.

The Earth as a monopole

Some people believe that Antarctica is a myth, despite all of the people who have crossed it. They instead claim there is a giant wall with a height of 150 feet of ice/rock with large mountains dividing it, that keeps the water in, presumably protected by a whole lot of super-soldiers who ensure nobody who sees it can report its existence.[13] You can see evidence of this in the UN flag,

which shows the north pole in the middle but no south pole.[14] "The most commonly asked questions, and the greatest mysteries yet to be solved are: how far does the Antarctic ice extend outwards? Is there a limit? What lies beyond, or is it just snow and ice forever with temperatures there reaching eventually absolute zero?" Sadly "U.N. treaties and constant military surveillance" keep us away from Antarctica so we will never find out.[15] Strange they would be confused about that—obviously the world is surrounded by a huge laurel wreath! Can't you see the flag there?

Other people have written about a great range of mountains in the middle of the continent, which is supposedly the location of a great city built by space aliens a billion years ago.[16] (This seems more believable than the claim immediately above.)

Similar to this are claims from Google Earth aficionados of UFOs and huge alien facilities being hidden in the Antarctic, some guarded by military tanks.[17][18] Of course they could just be glitches in the satellite photos.

There is also the view that there is no South Pole; instead there's a massive hole leading into the hollow Earth. Admiral Byrd went there, but his discovery has been hushed up.[19]