Mary Magdalene in the Cave, as depicted by Jules Joseph Lefebvre in 1876

The Bible records Mary Magdalene as the most prominent of Jesus's non-apostle hangers-on: a woman who had seven demons cast out of her.[1] Non-biblical tradition portrays her as a prostitute. Modern scholars, looking at the Bible and contemporary writings as historical texts, (like all texts, filled with subtext, editing, and distinct political perspectives) have revised the picture of Mary of Magdala,[2] classifying her as a full apostle of Jesus, possibly a spouse or romantic partner, and likely a leader of an early Christian Church in her own right. But sadly, someone or something has edited her out of history for being a woman in a position of relevance.

Mary Magdalene has been the vexation of men, the embodiment of temptation, the carrier of all sins and vices, and the proof that women must be controlled. She and Eve are the mythological counterpoints to Mary the Mother of Jesus's purity, the beginning of the duality marking woman in general as polar "pure" or "evil."

'Cept none of it is true. Mary lost her reputation sometime in the 6th century, when Pope Gregory the Great decided without justification that those 7 demons cast out of her were the 7 deadly sins, and intentionally identified the unnamed prostitute that Jesus forgives, as Mary.[3] Why? One supposes he did not much like women. This image of Mary was perpetuated and even used for titillating art throughout Medieval Europe. Luckily, the 20th century brought a new view of both Christianity and the Bible as something worthy of study from historians, linguists, and other "less biased" scholars, and she was returned to her position as beloved friend and "apostle to the apostles" though few if any churches actually accept that she was an apostle.

The Catholic Church has always venerated Mary Magdalene as a saint (feast day July 22). In the Eastern Orthodox Church, her official title is Saint Equal-to-Apostles Mary of Magdala. She is commemorated by the EOC on July 22, and also, as one of the Myrrhbearers,[note 1] on the 3rd Sunday of Pascha (2nd Sunday after Easter).

Church and Gospel of Mary[edit]

Like Peter and Judas, Mary was the leader of her own Gnostic church which likely began in the first century, not long after the death of Jesus, though possibly after the destruction of the Temple. The scripture of that church, the Gospel of Mary, was discovered in the late 1800s as part of the Akhmim Codex and likely written in the 3rd Century CE. The Gospel of Mary challenges Peter's right to be Pope, saying that role was bestowed upon her by Jesus himself.

As a typical Gnostic text, Mary is filled with references to secret knowledge that Jesus has imparted upon Mary before he died, teachings she attempted to teach to her church followers and which the church attempted to capture in the text. The Gospel's most important lessons describe the "self" -- the outer body that holds no value, and the inner self which is formed by the Soul, the Mind and hopefully the grace of the Spirit.

Politically, the text of the Gospel of Mary itself mentions that several of Jesus' other disciples (notably, Peter) doubted her visions, her teachings, and her position as most beloved of Jesus. Those lines in Mary most likely reflect less of what may have happened during Jesus' life between the real disciples and Jesus, but rather were a reflection of the next 200 years as the 3 or 4 main churches (Peter, Judas, Mary and Paul of Tarsus) fought for control of the early Christian message.

Gospel of Philip and Gospel of Thomas[edit]

Thomas describes her as a full disciple of Jesus, standing beside him throughout his teachings and being one of his most beloved. But, as with the Gospel of Mary itself, Thomas (one of the earliest written Gospels about Jesus) describes a brewing confrontation between Mary and Peter.

For lovers of a good romance or Dan Brown, the Gospel of Philip is an important read, as it could be read to contain more familial aspects of Jesus and Mary. "There were three who always walked with the Lord: Mary, his mother, and her sister, and Magdalene, the one who was called his companion. His sister and his mother and his companion were each a Mary."[4]

Peter has one seriously intriguing line which is made even more titillating by the fact that the papyrus has deteriorated right at the most perfect spot (words or letters that are missing are denoted by brackets): 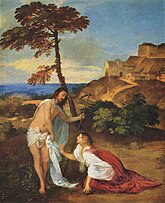 Mary has been the subject of many works of art, depicted both as a pious woman and as an opportunity to include sexy content or eye candy in Christian art. Often her role was exemplary, as Jesus's chief female companion. There are many images of the penitent Mary Magdalene, which depict her rejection of the flesh in one way or in another, and a focus on spiritual pursuits often surrounded by signs of her penitence and faith including skull, crucifix, Bible, and vessel for annointing.[6][7]

One common theme was the Noli me tangere

, in which the resurrected Jesus tells Mary to let him be ("Do not touch" or rather "stop clinging to me"). This originally provided an example of how the way to God was through faith and the heart rather than through grabbing him, but it also provided opportunities for sexy Mary Magdalene to paw at Jesus and even pull his clothes off, suggesting a romantic or carnal relationship between Jesus and Mary.[8]

The notion of Mary as Jesus's lover has proven compelling more recently. Works such as Jesus Christ Superstar and The Last Temptation of Christ have used Mary to represent Jesus's human side. The Da Vinci Code is the best known of several works representing Jesus bloodline theories that claim Mary and Jesus were not merely romantically attracted to each other but actually had children.[9]