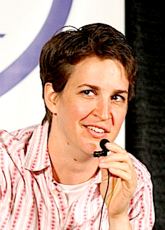 Rachel Maddow not on television

Rachel Maddow is a vampire[1] political pundit with a television show (creatively named The Rachel Maddow Show) featuring her commentary on MSNBC. Her show debuted in September of 2008. She is generally known for reasoned examination of issues from a liberal perspective (with a more than occasional dose of mockery).

After getting a bachelor's degree in public policy from Stanford, she went on to Oxford (outside the United States!) to get her doctorate in political science on a Rhodes Scholarship (just like Bill Clinton). And she's a lesbian. So she's clearly out to destroy American civilization and decency. Just by existing. And boy does that piss off the conservatives.

While she is a self-described Eisenhower Era Republican,[2] today her policies might seem much closer to the left-wing like Bernie Sanders as opposed to the center right we think of today. Her pet issues seem to be LGBT equality (file this one under duh), women's reproductive rights, veterans' issues and most importantly the Military-industrial complex which she wrote a book about that became a best seller and nominated her for a Grammy.[3] Her style of journalism and interviewing can be described as passive and calm with an infusion of geeky.[4] She is not one to be combative in her interviews, instead preferring to use the interviewee's words against them and use the segment right afterwards to do an impromptu fact-check. She has been shown to get emotional on air where after being told a story about a school shooting victim she broke down in tears and control had to cut to commercial at her behest.

Her focus on the Bernie Sanders campaign - as opposed to many media outlets who prefer to ignore or deride his campaign - as well as statements made by her on the air imply that she is in favor of most if not all of his political positions.

After the presidency of Donald Trump took off, coupled with Fox News scandals involving the 9PM slot, her viewership had begun to surge causing her for at least one quarter to have the highest ratings.[5]

By mid 2021, the news cycle was much calmer, with Joe Biden replacing the tumultuous Donald Trump as president, and the COVID-19 pandemic under control in the United States due to a widespread vaccination rollout. This helped to cause viewership declines across all cable news network channels. Despite this, Maddow was duking it out for the "most watched program on cable news" category with Fox News heavyweights like Tucker Carlson and Sean Hannity, sometimes even taking the top spot in some reports.[6][7]

This media-related article is a stub.
You can help RationalWiki by expanding it.
Retrieved from "https://rationalwiki.org/w/index.php?title=Rachel_Maddow&oldid=2433078"
Categories:
Hidden categories: