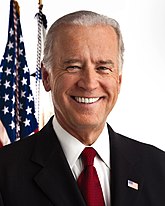 A smile which says, "I just came back from grabbing your wife's ass."

Joseph R. "Literally"[3] "Big Fucking Deal" "Amtrak Joe" "Gates of Hell" "Uncle Joe" "Come Hell or High Water" "Diamond Joe" Biden, Jr. is the conservative's false prophet former in a long list of gaffe-prone Vice Presidents of the United States[4][5] who, at the same time, managed to be one of Barack Obama's most important negotiators.[6]

His entire life has been marked by tragedy. He lost his wife and infant daughter in a car crash in the 70's, and his eldest son died in 2015 of cancer.

Since first becoming a Senator in 1973, Biden has ridden the train between his state and DC on Amtrak almost every week. One of his frequent trainmates was Senator Arlen Specter whom he first converted into a fellow train enthusiast and later made switch parties from (moderate) Republican to Democrat. As a frequent rider on Amtrak it should come as no surprise that Biden is a fan of rail as a mode of transportation and he has consequently been called "railfan in chief" and "Amtrak Joe" among other things. The Obama administration's ambitious high speed rail plan that was unveiled in 2009 is believed to be mostly thanks to his influence and when a train derailed on the Northeast Corridor a visibly shaken Biden spoke to media, that he himself had been on the same route numerous times and that more investments in Amtrak is needed now more than ever. The Republicans of course voted to cut Amtrak funding on the very same day.[7]

Gay marriage should be legal... oops[edit]

In May of 2012, right in the middle of the re-election campaign, Biden misspoke (or maybe not), saying that "I am absolutely comfortable with gay marriage."[8] This gaffe forced Obama to have to actually address the gay marriage issue head on. The President said he had evolved and now accepted gay marriage. This was one of several turning points in the campaign, so thank him for that. (There's some not-entirely-unfounded speculation that Biden's "gaffe" was a trial balloon for a planned announcement by the President: if the media didn't make too much of a fuss about Biden's statement, or made a fuss in a positive direction, it was safe for the Prez to, um, come out.)[9]

Biden's support of women's rights is broad and consistent. Even feminist men, like Biden, can be tone-deaf, and that is how Biden appeared when questioning Anita Hill regarding her accusations of sexual harassment against Supreme Court nominee Clarence Thomas during his Senate confirmation hearings.[10] In 1994, Biden authored and strong-armed the passage of the Violence Against Women Act (as part of a larger bill, Violent Crime Control and Law Enforcement Act, also known as the Biden Crime Act) which among other things, aids women in cases of domestic assault and for the first time, provided a way for victims of rape or domestic assault to find redress in civil courts if the State or District prosecutor choose not to try a case.

Despite personally following his Catholic faith in the belief that life begins at conception, Biden is strongly pro-choice. In the 2012 Vice-Presidential debates, he stated his own view (and challenged all lawmakers):

There are several videos and pictures of Biden engaging in what commentators consider to be inappropriate proximity to women and children, including kissing and or touching.[13][14][15] Biden described himself as a "tactile politician", admitting this behavior caused trouble in the past.[16]

In March 2019, Lucy Flores, former Nevada assemblywoman, accused Biden of having kissed her without her consent at a 2014 campaign rally in Las Vegas. Flores wrote that Biden walked up behind her, put his hands on her shoulders, smelled her hair, and kissed the back of her head, in "an intimate way reserved for close friends, family, or romantic partners – and I felt powerless to do anything about it."[17][18] Few days later, three additional women came forward with allegations of inappropriate conduct. Amy Lappos, a former congressional aide, accused Biden of having crossed a line of decency when he touched her in a non-sexual, but inappropriate way by holding her head to rub noses with her at a political fundraiser in Greenwich in 2009.[19] Another woman said that Biden ran his hand from her shoulder down her back, and the other said that he placed his hand on her thigh.[20][21] By April 2019, a total of seven women accused Biden of inappropriately touching them.[22]

On March 24, 2020, one of Biden's previous accusers, Tara Reade, came forward with additional allegations of sexual assault. She had reached out to the organizations Time's Up and the National Women's Law Center for legal help moving forward with her story due to backlash she had received with her previous accusations. Both organizations declined to help, citing that it may threaten their nonprofit status due to Biden's active campaign. Her brother and a close friend of hers both recall being told about the incident at the time. [23][24] Joe Biden denies the accusation. [25]