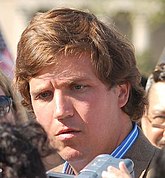 Tucker Carlson, also known as Cucker Tarlson[1], is a white nationalist,[2][3] paleoconservative political commentator, news correspondent, Donald Trump supporter, and noted jackass. He started his career as a semi-respectable journalist, and has been sinking lower ever since.[4] He co-hosted the CNN show Crossfire (before it was cancelled), the MSNBC show Tucker (before it was cancelled), and currently works for Fox News, taking Bill O'Reilly's prime-time spot, with his show Tucker Carlson Tonight.[5] He is also the co-founder and former editor-in-chief of The Daily Caller. Economically, he previously held libertarian views, but has made a U-turn to protectionist economic analysis.

According to Erik Wemple of The Washington Post, Carlson's modus operandi is to blindside "his guests and keeping them from issuing fully formed answers", as well as making false statements that his guests are ill-prepared to refute.[6] When his guests object to his loaded questions, he'll keep badgering them for not answering his question and then declare victory because of this.

On October 15, 2004 Jon Stewart appeared on Crossfire and although he criticized the show as a whole, Carlson took it as a personal attack. Stewart attacked the show for sensationalizing political debate and failing to provide hard-hitting interviews with those they agree with, comparing it to professional wrestling. Carlson decided to engage in the tu quoque method of debate by pointing out that Stewart did not ask John Kerry tough questions. Stewart responded with: "You're on CNN! The show that leads into me is puppets making crank phone calls! What is wrong with you?"[7]

The show was cancelled a few months later with the president of CNN stating that he felt Stewart was right in his criticisms.[8] However, whether or not this is the real reason is still debatable. Rather pathetically, Carlson is still under the delusion he won the debate[9] and also has made claims such as that a Daily Show producer called him to say he was sorry and that Jon Stewart lectured the show's staff for over an hour. These claims have never been backed up and, given his history of dishonesty (see Keith Olbermann incident below), this leaves him open to skepticism.

He appears to consider 1950s gender roles applicable in modern society, believing that the idea of a woman paying for her man's meals is "disgusting."[10] It should be noted that his attitudes may offend men as well since he does not consider statutory rape a crime if the victim is male and the perpetrator is female, further adding that it is "whiny" for the boys to report it.[11] He has attacked rape shield laws that protect the identity of victims, and he has defended pedophile Warren Jeffs.[12][13][14][15]

Few moments of not being a dick[edit]

While he supported the Iraq War at first, he would later criticize it [32] and the Bush Administration in general.[33] He also supports same-sex marriage.[34] In August 2018, he dedicated a segment of his Fox News show to calling out Amazon, Walmart, and Uber for not paying workers a living wage (and thus, forcing taxpayers to pick up the slack instead), in weighing the benefits of the "Stop Bezos Act" proposed by Bernie Sanders and Ro Khanna.