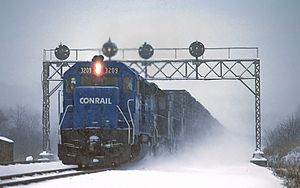 Rail transportation uses giant boxes running on steel wheels and steel rails for the function of moving bodies and things from Point A to Point B. Rail transportation can be found on every continent, even formerly Antarctica. This is the "legacy network" referred to over at the High speed rail article. Often, trains of this network are diesel, haul freight as well as passengers and obviously, doesn't break 200 km/h (124 mph) in service. Higher-speed rail

falls into this category, due to it covering speeds below the threshold of high speed rail.

There are seven major[note 1] freight railroads operating in the United States (Two of which, Canadian National and Canadian Pacific are Canadian.) Larger railroads were numerous until the second half of the 20th Century. Increased competition from passenger airplanes and the Interstate Highway System

stole away passengers, and trucks swooped in stealing away freight and postal contracts, which eliminated profits on passenger trains, leading to their demise and the goal to phase out service and focus on freight. The increased stress loss of freight traffic and other economic factors, like the loss of manufacturing in the rust belt region contributed to the mergers and bankruptcies.

East of the Mississippi River[edit]

The 1976 bankruptcy of the Penn Central

in 1972. The loss of the Penn Central threatened to cripple the Northeast United States' rail access, leading to the formation of Conrail

, an actual United States Federal Government success story. In 23 years, Conrail went from the ashes of a number of companies that catastrophically collapsed, with a system that was in such disrepair that derailments were frequent even at low speeds to a network was so desired by the two other major east coast railroads, it led to a takeover fight, before a compromise where the company was split between them.[1][2]

Absorbing the split up Conrail system were the Norfolk Southern Railway and CSX Transportation. Norfolk Soutern's merger in 1982 was a simple two company merger between the Norfolk & Western Railway and the Southern Railway.[3] In 1986, CSX[note 2] Transportation came into existence following a merger of the Chessie System Railroads[note 3], the Baltimore and Ohio, Chesapeake and Ohio, and Western Maryland, with Seaboard System Railroad.[4][5]

West of the Mississippi River[edit]

Passenger transport in the United States[edit]

From the start of railroads in the United States to 1971, were passenger operations were a private operation. By the 1940s and 1950s passenger operations profitability began to fall, as increasing competition from the automobile, along with interstate highway system began to siphon off passengers. Airlines also began to steal the railways long distance business as air travel became more affordable and was significantly quicker with trip times measured in hours, vs railroads multi-day trips. Most railroads saw profitability of most routes vanish in 1966 when the United States Postal Service discontinued using rail to transport mail, using trucks and airplanes instead. Mail service that had been apart of the passenger services had been propping up dwindling revenue from passengers, and now railroads were staring at hundreds of routes that were in the red. 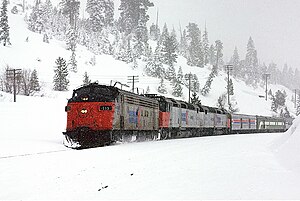 The California Zephyr, operated by Amtrak in 1975.

In May 1, 1971, Amtrak was formed by the United States government, to take over intercity passenger train operations from railroads. The agreement for the formation provided Amtrak with rail equipment and stations, but no tracks, which were retained by the freight railroads. The bankruptcy of the Penn Central allowed it to obtain control of the Northeast Corridor. With the densely populated corridor that linked numerous major cities on the Boston-Washington corridor

that it had control over the maintenance and assignment of train priority, favoring passenger service above freight; Amtrak grew the corridor into a efficient service that moved 37.% (11.9 million) of the Amtrak's 31.7 million passengers in 2017.

Outside of the Northeast Corridor, Amtrak's routes suffer from a few key problems:

, the largest and only transcontinental railway in Canada, and formerly a Canadian Crown corporation, until privatization in 1995; Canadian Pacific

, the other large railway in Canada. Both companies formerly operated passenger services, until the formation of VIA Rail in 1977.

exists in a way similar to America's Amtrak, with many of the same problems, compounded by the fact that Canada is less populated [note 6] with larger stretches of empty space compared to the United States [note 7], and doesn't own the Corridor

exclusively like the Northeast Corridor in the United States, and it has a ridiculously low maximum speed of 100 miles per hour[note 8] Equipment age is also catching up to VIA, as they are running rebuilt F40PH locomotives, a locomotive model completely retired in the early 2000s by Amtrak, and replaced by a newer P40DC. A large amount of their long distance train cars were built in the 1950s and earlier, these same types of cars which have have been almost fully[note 9] replaced by Amtrak. It also has the same unpleasant problem of a legislator that would like to do away with it (or at least giving it any money).

In the United Kingdom[edit]

From 1948 to 1997, railways within the United Kingdom, were operated by a state run company, British Rail. Bad planning in the form of The Modernisation Plan

in the 1950s would haunt British Rail for decades to follow, with a focus on building large yards for wagonload freight and replacing steam locomotives with diesels and electrics. The flaw was multiple, building large, expensive infrastructure for wagonload freight that was dying off, replaced by container traffic which required space and different yard layouts. Unreliable diesel locomotive designs replacing reliable steam locomotives that in some cases were barely a decade old, with many years left in them, and in some cases with locomotives that had no real purpose.[note 10] [11]

were devised in the 1960s in an effort to reduce increasing losses as passenger drain from roadways and loss of rail subsidies, by reducing the size of the entire system by 55% (2,363) stations and 30% (5,000 miles) of the track mileage. The cuts actually had a worsening effect on traffic rates, since the reasoning behind closures sometimes overlooked unprofitable smaller lines feeding profitable major lines. British Rail would never see the promised savings of the claims in the original plan.[12] The 1980s found major changes in British Rail's organizational structure, and gradual improvements and investments in the system, such as electrifying key routes, new rolling stock, starting to replace stock from the 1950s.

In 1994, privatization of British Rail

was commenced by John Major, and completed by 1997, putting Britain's entire rail system into private hands. The process was carried out in approximately 4 years. No thanks to these clowns

. The only improvement that replacing those clowns with these geniuses

, is that the geniuses are a "public sector body", instead of the clowns who were a private, for the profit of the shareholders company, which in various ways contributed to those four accidents.[note 11] No longer motivated by greed, Network Rail has managed to go since 2007 2020 without a derailment or accident resulting in a passenger fatality. Yeah, it appears to be absolutely sheer luck, following the Stonehaven derailment

Infrastructure flaws aside, promises and guarantees of improvements in train quality were also overblown, with the assurances that the then 40 year old Mark 1

, which were low cost diesel railbuses[note 13]. The Pacers are despised by passengers due to their rough ride, being noisy, small size on some busier routes, and had a 20 year lifespan, which ran out in 2000. The Pacers are only being removed from service in December 2019 because the 2010 Equality Act

requires that from 2020 public transport be accessible

, something none of the the Pacers can comply with, unless extensively (and pointlessly) retrofitted.[14]

Improvements in service was also kind of a joke. Since most trains don't cross franchise lines[note 14], passengers have to transfer trains, even if the origin and destination station are close. In 2002, train operating companies WAGN

received praise for managing to coordinate their services, so passengers traveling between Cambridge and Norwich [note 15] could easily transfer between the two different railway franchises. This 'improvement' is kind of empty when you realize prior to privatization, a passenger could just take a train from Cambridge to Norwich, no transfer involved. [15]

On top of all of this, train ticket prices, which under this new competitive free market should have gone down? They've consistently risen every year since at least 2003.[16][17]

Rail's huge advantage, that has only been growing in recent years, is the volume of cargo or people that can be moved versus the energy spent moving it. In the United States, on average, a ton of freight was being moved 770.8 kilometers (479 miles) on one gallon of fuel. [18] Further, rail has advantages in countries where electrification systems are common, enabling further options to reduce pollution by using alternative power generation to power trains. Further, trains can free up roadway capacity, by moving the equivalent of dozens of trucks in a single train.

Often, talk comes from politicians of trying to save money by eliminating subsidies to railways, particularly passenger railways. Unsurprisingly this isn't always effective, see British Rail. While it dropped for a few years instantly following privatization, following several horrific rail crashes, the subsidies ended up at one point over double the highest for British Rail in the 10 years prior to its dissolving.[19] Expansion of railroads or increasing operations on existing lines is often opposed by NIMBYs, including people who don't understand rail tracks are private property and are annoyed by trains interrupting their jog along the tracks, or moving into houses next to tracks and not grasping trains make noise.

See the main articles on this topic: Global warming and Denialism

In the United States, 70% of coal is shipped by rail and coal makes up about 1/3 of all rail freight by weight.[20] Because of this, "The four largest American freight railroads—BNSF Railway, Norfolk Southern, Union Pacific, and CSX—have sat at the center of the climate-denial movement nearly since it began…"[20][21][22][23] 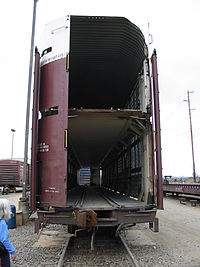 Inside a FEMA car auto carrier.

Railroads have found themselves dragged into the Alex Jones conspiracy bulletin board after a 1995 film tried to connect the Amtrak Beech Grove Repair Facility with the FEMA camp conspiracy, which gained new 'traction' after clips of the film got on YouTube in the late 2000s. Moreover, this theory has expanded to include "FEMA Trains" with theories that auto carriers

, rail cars for carrying automobiles, are actually for the transport of either prisoners or coffins of dead bodies and FEMA has been amassing them.[24][25] This theory was helped with the combined election of Obama in 2008 as the auto industry tanked causing thousands of auto carriers mothballed on sidings for months all over the nation, which gave plenty of time for anyone with a video camera to make a video about FEMA Cars in their town waiting for the word from the government for martial law

Large clusters of rail cars, particularly boxcars and auto carriers or rail tracks in proximity to "military bases" are further evidence of the conspiracy being afoot.[26][27] Wait until they find out about Bailey Yard.[note 16]

From establishment conservatives to wingnuttiest of the right-wingers there is an ideological trope that purports progressives wanted to crush individualism to, instead, sneakily subjugate the masses under the egalitarian kosh of Big Government which is why left-(of-centre-)leaning politicians supposedly advocate on behalf of affordable mass & high-speed rail transit.[28] Maybe though they're onto something since not even the smart-assiest of the smart right-wingers can always elude the allure of functioning, publicly funded infrastructure.[29].