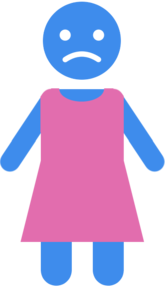 Being mistaken for the wrong gender can really stink.

Gender dysphoria (sometimes, but not preferably, gender identity disorder[1]) is felt by individuals who experience discontent from their gender assigned at birth. It is also a formal psychological and psychiatric diagnosis. Not all authorities classify this as a mental illness; the National Health Service in the United Kingdom describes it as "a condition for which medical treatment is appropriate in some cases."[2]

Recent research has indicated that transgender people tend to have the same or similar brain structures as their identified gender, even before hormone replacement, thus giving the terms "gender" and "sex" a more complex relationship than before, seeing as it has been proven the former is not just a social construct.[3][4] Possible causes of gender dysphoria include genetics, upbringing, and prenatal exposure to particular hormones, among others.

As a minor concession to the trans community, in response to complaints that "gender identity disorder" was a stigmatizing term, the American Psychiatric Association changed the "Gender Identity Disorder" diagnostic category in the DSM-5 to "Gender Dysphoria" in 2013.[5] The APA, as well as the larger Western healthcare structures, remains highly conservative on the issue, to the point that there are thriving black and grey markets for prescription hormones and some cosmetic treatments. Some clinics have sought to move past this issue by offering "informed consent" prescriptions, for which a psychiatric diagnosis is not required.

Someone assigned female at birth with body-related gender dysphoria once described the experience of having breasts as having two alien jellyfish constantly suctioned onto one's chest. Similarly, some individuals assigned male at birth who feel dysphoric about their genitals describe the feeling as having a big raw chicken stapled between one's legs. Try imagining how that must feel.

Regarding transition as a choice[edit]

Many people and even some LGBT organizations make the mistake of mixing up gender dysphoria with body dysmorphia.[6] This can lead to people suffering from gender dysphoria being told they're just delusional (or conversely, sometimes a body dysmorphia sufferer gets asked some awkward questions). Despite the superficial similarity, they are two vastly different things; body dysmorphic disorder (BDD) is a mental illness on the OCD spectrum where the sufferer is extremely anxious about their appearance and spends a great deal of time fixating on and obsessing over perceived bodily flaws which are either grossly exaggerated in their mind or may not even exist at all, whereas gender dysphoria is distress caused by a mismatch between gender and sex characteristics.[6]

People with body dysmorphia sometimes seek out surgery to correct what they perceive as their physical flaws, even going to the extent of having repeated surgeries on the same body part. However, since this does not address the underlying mental issue, this does not alleviate the dysmorphia, which simply returns and continues to cause distress. By contrast, transgender people who decide to transition often find that their dysphoria is alleviated by some combination of sex reassignment surgery, hormone replacement therapy, and social transition (wearing gender-appropriate clothing, changing name and pronouns, etc.). Trans people with gender dysphoria do not have a skewed body image like people with body dysmorphia (and some other psychiatric conditions, eg. eating disorders) do; they simply feel like their bodies are wrong for their gender identity and would feel much more comfortable in a body of the opposite sex.

As an analogy: someone who has been near-sighted from birth might want to try wearing glasses or getting laser eye surgery. This is not a delusion or mental illness. On the other hand, someone who has gotten the deep-seated impression that everyone else's peripheral vision is exactly as well-focused as their center of vision and tries to "fix" themselves with excessive, almost dangerous amounts of eye-drop definitely is mentally ill.

Rapid onset gender dysphoria (ROGD) is a made-up syndrome championed mainly by TERFs. It claims that trans children are essentially heterosexuals in denial who are aroused by the thought of being members of the opposite gender.[7] It has found popularity among parents whose children identify as trans "out of the blue" due to being "naive and impressionable."[8] It’s essentially a thinly-veiled form of transphobia.[9]

Unfortunately, autistic people of all ages may also be targeted for dismissal using ROGD. Author Tania Marshall claimed that ROGD could be a trait of "high-functioning" autistic women.[10] This is especially troubling when you consider that autistic people are more likely to be transgender.

What looks like "rapid onset" to outsiders is often preceded by years of feeling uncomfortable with one's assigned gender.[12]

"The ‘rapid onset’ often reported by parents is not a new phenomenon. Youth very commonly will delay coming out in hostile environments, being afraid to disclose due to minority stress factors including social stigma, internal stress, fears of rejection by family and friends, and legitimate concerns about violence. Given that these parents sought out hostile websites, the fears of these youth would seem to have been justified."

The term was formalised by a survey conducted by Dr Littman of 256 parents who frequented anti-transgender websites including Transgender Trend, Youth Trans Critical Professionals, Parents of Transgender Children and 4thwavenow[14]. The survey only spoke to parents who already held trans-critical views; not trans children themselves. A total of 76.5% did not believe their child was trans. 63% of the parents surveyed have been called “transphobic” or “bigoted” by their children, and only 36% had seen a clinician regarding their child's gender identity. Of the children themselves, whom Littman did not survey, 44% were classed as gifted, and only 4.3% as having a learning difficulty. 15 months after the survey, 83.2% of the children still identified as trangender, despite their parents' opposition[15].

It is worth mentioning that the 'children' of the parents surveyed in this study were aged between 11 and 27. [16]