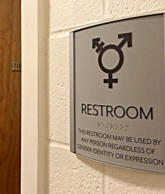 Sex segregation in public restrooms is the concept of having separate bathroom facilities for male and female individuals.

Segregation at one time had a purpose, a purpose that is now obsolete. At one time in the Western world, only male bathrooms existed because of the attitude that women should stay home. The introduction of female bathrooms was a means to allow women in the workplace but still have them "separate but equal".[1][2] Over time, women have increasingly gained more rights, making the original reason of urinary segregation appear moot. Despite this, conservatives typically want to maintain tradition even if said tradition's reason is no longer relevant.

Bathroom panic has a long history. In the mid-1970s, the conservative political activist Phyllis Schlafly mobilized against the Equal Rights Amendment, using the argument that it would lead to unisex toilets, which would be dangerous for women.[6] Even back then, Judy Carter pointed out that unisex bathrooms had existed for centuries, especially on public transport, with few to no 'privacy' issues.

As a general rule, the main people harassed in bathrooms have been trans people[7] and cis women who are butch,[8] androgynous,[9] or even just have short hair.[10]

This is even though right-wing groups have admitted the bathroom issue is 'largely contrived'.[11]

This sexuality-related article is a stub.
You can help RationalWiki by expanding it.
Retrieved from "https://rationalwiki.org/w/index.php?title=Sex_segregation_in_public_restrooms&oldid=2461440"
Categories:
Hidden categories: