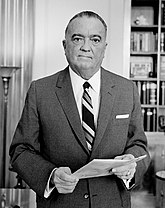 John Edgar Hoover (1895–1972) was a famous American extortionist and asshole who headed the FBI and had a large building in Washington, D.C. unfortunately named after him.[note 1] He ran the Bureau for 37 years, and was known for both his improper and illegal conduct, both at the behest and independent of the Presidents he served under,[1] and organizing surveillance against both officials in presidential administrations, and famous activists like Martin Luther King, Jr.[2]

In 2011, Leonardo DiCaprio, under the direction of Clint Eastwood, presented a more dignified portrait of the man than ever existed in reality, in J. Edgar

. At least he never talked to a chair. And no, Leo did not get an Oscar for that.

While J. Edgar Hoover didn't start the trend of McCarthy-ish political delusions of seeing the commies everywhere, he certainly exacerbated it to another level entirely. His career in law enforcement really took off when Attorney General Alexander Mitchell Palmer gave him the noble task of rounding up loudmouth pinkos and assorted foreigners during the 1919 Red Scare, and he just sort of stuck with what he knew after that, regardless of what was actually happening around him. This culminated in his being convinced that the aforementioned Dr. King was a communist and declaring the Black Panther Party as the greatest political threat to the United States. Even the United States Department of Justice thought he was taking his rhetoric too far.[3]

Of course Hoover was more than eager to turn a blind eye to actual American terrorists on the Right, at one time even withholding evidence on the notorious 16th Street Baptist Church bombings from Alabama prosecutors until all but blackmailed into releasing it. Maybe if he didn't coddle the Ku Klux Klan and White Citizens' Council

so much he wouldn't have had to contend with the black power backlash... you know, the thing MLK explicitly warned him about.[4]

Hoover and Tolson, vacationing together in Florida in 1939

Hoover and the FBI under his directorship spent decades harassing and spying on homosexuals.[5] Even after his death and the rise of gay liberation, Hoover managed to continue harassing the LGBTQ community: the now-defunct J. Edgar Hoover Foundation[6] managed to get a (probably unenforceable) restraining order against the tour guides of the 'gay corner' that was intentionally placed adjacent to Hoover's and FBI deputy director Clyde Tolson's adjacent graves.[5] Hoover and Tolson had often been alleged to have been longtime lovers.[5]