From RationalWiki
Jump to: navigation, search
Not to be confused with the SCO Group

, which is just a computer company obsessed with enforcing Unix copyright it doesn't actually own 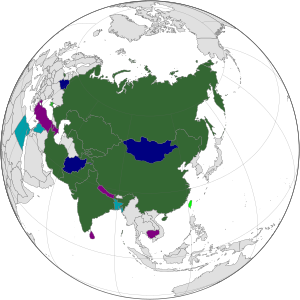 Trying to get more complicated than the EU, are we there?

SCO or Shanghai Cooperation Organization, is a multinational security alliance between the People's Republic of China, Kazakhstan, Kyrgyzstan, Russia, Tajikistan, and Uzbekistan. The SCO was founded in 2001 by the leaders of the member countries. The SCO is explicitly charged to deal with the three problems of terrorism, separatism, and extremism.

Although the SCO sometimes coordinates in the cultural and societal sector, it is primarily an economic and security organization. The number of military exercises between SCO member countries have increased since the date of its formation. The first military exercise was held in Tashkent, Uzbekistan in 2003.

The two most powerful member countries of the SCO are Russia and China; the first joint military exercise between China and Russia was held in 2005 which was named "Peace Mission 2005." At present Afghanistan, Belarus, India, Iran, Mongolia and Pakistan have observer status in SCO. If India joins the SCO, it would have the potential to be a very powerful security alliance.

However, as of right now, there are many, particularly NATO analysts, who dispute the importance of the SCO. Russia and China still do not have the best of relations, and are in strong competition for Central Asian mineral and fossil fuel rights. Moreover, Russia managed to offend the entire SCO with its war in Georgia,[1] as it was explicitly a war in support of separatists. Though China and Russia have a competitive role in terms of global influence, they are increasingly collaborating in the fields of science, technology, security, and the military.[2]