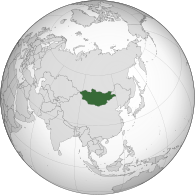 Mongolia is a landlocked country located in east-central Asia between China and Russia. It used to run a massive empire, but these days it doesn't even run Inner Mongolia.

The Mongol Empire at its greatest extent, 1279 CE.

From the late third century BCE to 93 CE, the Xiongnu ruled Mongolia, and caused the Chinese enough problems to lead to the building of the Great Wall.[1] The ethnic identity of these nomads is the subject of much speculation, with various theories suggesting Mongolian, Turkic,[1] Iranian, or Uralic origins; some also link them to the Huns who would later ravage Europe, though none of these theories are widely accepted.[2] One particularly odd theory regards them as distant relatives of the Athabascan and Apache Native Americans. Most rest on analysis of a very few words that have been recorded in Chinese sources. Eventually, after being ruled by a succession of other nomadic empires, including the Turkic khaganate, the Mongol steppes were united in 1206 under one Temujin, who then took the title Chingis (Genghis) Khan. From there, the story becomes familiar: the Mongols proceeded to take over most of Asia, including China, Iran, and much of modern Russia, stretching even into Anatolia (modern Turkey) and Europe (modern Belarus and Ukraine, and briefly further west). Altogether, they controlled nearly a quarter of the world's land area. Unlike many of their contemporaries, the Mongol states were relatively tolerant of various religions; in the the 1250s, Flemish missionary William of Rubruck wrote of finding Nestorians, Sunnis, Buddhists, and Tengrists all living peacefully together in the capital, Karakorum,[3] though Taoism was not always so well looked upon.[4]

Eventually, this Mongol empire broke up, and in 1635, Inner (southern) Mongolia fell to the Qing dynasty, who were soon to rule China, with the rest of Mongolia following suit in 1691.[5] From then until 1911, Mongolia was governed (in two parts, Inner and Outer) as a relatively autonomous bit of the Qing empire. In 1911, however, during the collapse of the Qing empire, what is now the Mongolian state managed to secure its independence from China, and came under the theocratic rule of the head of Tibetan Buddhism in Mongolia, who took the title Bogd Khaan.[6] Mongolia persisted in its newfound independence until 1919, when it was conquered by forces of the Republic of China.[6]

Starting with a revolution in 1921, Mongolia came under the control of the Mongolian People's Revolutionary Party, which in turn was effectively controlled by Russia. In the late 1930s, this regime embarked on a brutal purge of political enemies, especially clerics. The death toll is estimated at between 22,000 and 30,000, with around 18,000 having been Buddhist clergy.[7] During World War II, Mongol troops took part in the battles of Khalkyn Gol/Nomonhan and later the Soviet invasion of Japanese-occupied China; in addition, Mongolia provided various forms of material aid to Soviet forces.[8] During the Cold War, Mongolia came down firmly on the Soviet side of the Sino-Soviet split. Despite an earlier veto by the Republic of China, which still claimed Mongolia as its own territory, Mongolia became a member of the UN in 1961, after the USSR threatened to veto membership for all the newly decolonised African nations if Mongolia wasn't allowed to join.

To give a sense of how awful the development in Mongolia was during this time, when Nikita Khrushchev exiled his foreign minister, Vyacheslav Molotov

, to Mongolia in the early 60's, he complained that in the capital city even high-ranking government officials kept yaks.

In 1990, a peaceful uprising saw various concessions from the Mongol People's Revolutionary Party, and the first democratic elections were held that July; in 1996, the MPRP lost its majority in the legislature, though they have held one several times since. At present, the Democratic Party, descended from the original anti-communist opposition, is in power.[9] 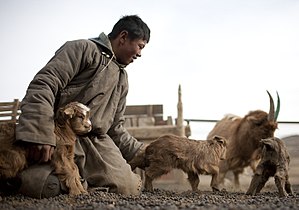 It's not all pillaging

Since it is no longer routinely exporting invasions, Mongolia has instead found other commodities to ship out. Nearly 80% of the country's exports are mineral resources of one sort or another, leading to the joke that the country is being "dug up and sold to China".[10] Other exports include various agricultural products and clothing. They produce a lot of cashmere from their high quality goats.[11]