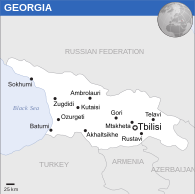 Georgia (Georgian: საქართველო Sakartvelo) is a tiny (approximately half the size of the homonymous US state) country in the South Caucasus, bordering Russia, Turkey, Armenia, and Azerbaijan. Georgia was formerly part of the Soviet Union, just like most of its neighbors. Also, like those neighbors, its government is dominated by one party, the center-left (but socially conservative) Georgian Dream

. It was also the birthplace of Joseph Stalin (under the name Ioseb Jughashvili/იოსებ ჯუღაშვილი). Its capital and largest city is Tbilisi.

Georgia is currently involved in a territorial dispute with the de-facto independent regions of Abkhazia and South Ossetia, which seceded from Georgia with the help of Vladimir Putin's Russia.

Georgia was possibly the birthplace of wine; the oldest wine found to date, at 8,000 years old, was found there in 2003.[2] Interestingly, images of worshiping wine were found on the jars, and this may have been the origin of such gods as the Greek Dionysus and the Roman Bacchus. Some ancient metallurgical remnants were found in Georgia as well.[3]

In days past, Georgia was split into two kingdoms: Colchis

in the west and Iberia

(not to be confused with the one in Spain, Portugal, Andorra, and Gibraltar) in the east. Colchis was an important location for Greek mythology, with the Golden Fleece being located there. Iberia became part of the Persian Empire, while Colchis was incorporated into Roman territories as Lazica for a while. Eventually, the unified Kingdom of Georgia was formed, but it fell apart circa 1466. After another few hundred years of strife, it was incorporated into the glorious Russian Empire from 1800 to the October Revolution.

See the main article on this topic: Soviet Union

Soon after the October Revolution, the Transcaucasian Democratic Federative Republic was formed, encompassing Georgia, Armenia, Azerbaijan, and small sections of eastern Turkey and southwestern Russia. Georgia exited one month and four days after the republic's formation, with Armenia and Azerbaijan following two days later.[4] Georgia was then independent for less than three years as the Democratic Republic of Georgia, a Menshevik government. It was absorbed by the Soviet Union after their military forces could not repel the Russians.

When Georgia was incorporated into the USSR in 1921, it retained its borders and extended just slightly past its current boundaries (including the disputed Abkhazia and South Ossetia). As a Soviet republic, it had a pseudo-capitalist economy. It somewhat resisted the communist economic system the USSR preferred, resulting in high ownership of cars and houses and making it one of the most economically prosperous divisions of the USSR.[5] Eventually, Georgian nationalists began to clash with the Soviets, but Georgia remained in the union until the 1991 collapse.

Scene from the Rose Revolution.

The Rose Revolution, or in Georgian, ვარდების რევოლუცია (lit. Revolution of Roses), was a large-scale peaceful protest occurring across Georgia, which took place between November 3 and 23, 2003.[6] The protests resulted in the resignation of the nepotistic, corrupt[6][7][8] Soviet-era leader Eduard Shevardnadze

, whose place was briefly taken by the conservative parliamentarian Nino Burjanadze

until an election could be held. In the next election, Mikheil Saakashvili

(the de facto leader of the revolution) won in a landslide with 96% of the votes and a large voter turnout of 80%.[9] The protests may have helped inspire the Ukrainian Orange Revolution

Saakashvili wound up as president of Georgia until 2013 after this victory, although opponents accused him of electoral fraud.[11] His administration was a mixed bag; although he had a pro-European and globalist agenda[12][13][14] and helped eliminate rampant corruption,[15] his presidency was plagued by human rights abuses[16][17] and authoritarianism.[18][19] In addition, his government failed to adequately protect protesters with unpopular ideologies like LGBT rights groups[20] (although Georgia is better with LGBT rights than its neighbors, with the parliament having unanimously approved anti-discrimination legislation that protects LGBT citizens,[21] and it is ranked a good deal higher by ILGA).[22] Saakashvili tended to dismiss the arguments against him by accusing his opponents of being pro-Russia.

Eventually, Saakashvili and his party

were kicked to the sidelines as the tycoon Bidzina Ivanishvili

and his new Georgian Dream

party coasted in on a wave of popular discontent with the president.[23] The presidential election held shortly after the parliamentary one resulted in the GD-associated candidate Giorgi Margvelashvili winning. Ivanishvili continued on essentially the same foreign policy path as Saakashvili but was considerably more corrupt and is thought by some to still be calling the shots behind the scenes due to GD's continued dominance.[24] Saakashvili was rather bombastic and populist, while the current administration is less revolution-minded, and little of note has happened under its control. 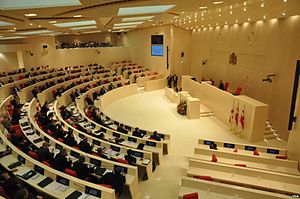 Corruption was rampant until the Saakashvili administration of 2004 to 2013, with Soviet Georgia being considered corrupt even for a Soviet country. It decreased hugely throughout Saakashvili's presidency, but experienced a resurgence with the advent of Georgian Dream.

Although Saakashvili did a remarkable job of crushing corruption, OSCE observers assessed the 2008 presidential election as wrought with electoral fraud.[25] However, some thought the electoral fraud wasn't widespread enough to have influenced the outcome of the election.[26]

In the polls leading up to the 2016 parliamentary election in Georgia, only 19% of respondents selected the ruling Georgian Dream - Democratic Georgia party as their first choice.[27] Despite this low approval, the party won a whopping 115 of the 150 seats (partially due to the weird representation system of Georgia).[28] Opposition parties accused Georgian Dream of vote-rigging,[29] which is quite plausible. Although parties and people may win elections with a low approval-rating, the massive disparity between opinion polling and electoral results looks suspicious. 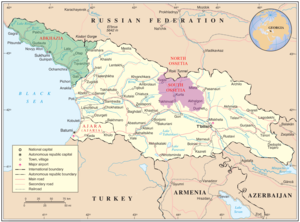 This is why Georgia can't join NATO: disputed land (Abkhazia in green; South Ossetia in purple).

See the main article on this topic: Abkhazia

Abkhazia is a province in northwestern Georgia. It is primarily inhabited by ethnic Abkhazians rather than Georgians like the rest of the country, and there are some ethnic tensions between the two. Abkhazia has attempted to secede from Georgia and has been aided by Russia (rather in the manner of Nagorno-Karabakh). Few nations recognize Abkhazia as independent,[30] and Georgia asserts its right to the territory. Elections may be illegitimate, as ethnic Georgians have been denied the right to vote.[31] Most Abkhazians support independence, with a smaller percentage supporting Russian annexation and a very tiny percentage supporting Georgian unification.[32] Currently, the conflict is unresolved.

See the main article on this topic: South Ossetia

South Ossetia is not an actual province in Georgia (well, it used to be, thanks to later-reversed, Soviet-era ethnic gerrymandering), but a region encompassing parts of several. It borders Russia and, like Abkhazia, has been aided in its secession by Russia. It and Abkhazia were the cause of the 2008 Russo-Georgian War, with both fighting against Georgia alongside Russia and winning. Ethnic cleansing against various ethnic groups residing in the area was conducted by Ossetians.[33]