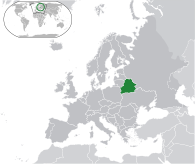 European historians will often say that Poland is the world's doormat, but throughout history Belarus was Poland's doormat. Despite the fact that Belarus has a distinct language

, of the East Slavic variety, it wasn't until World War I that anyone besides Belarusians themselves even recognized them as a separate ethnic identity.[citation needed] Even then, the name the Russians came up with and propagated—first Belorussia and, after the communists took over, Byelorussia—was an intentional misnomer that attempted to Russianize them.[note 1]

The region was part of the Grand Duchy of Lithuania and its successor the Polish–Lithuanian Commonwealth, under which attempts were made at Polonization, until it was captured by the Russian Empire in 1795, and Russification ensued. They enjoyed greater autonomy and linguistic rights during the region's brief occupation by Germany in early 1918 than under the Russians. It wasn't until 1918 that Belarus even had a chance to try to govern itself, forming a short-lived socialist republic, the Belarusian People's Republic

. However Belarus was no match for either the Soviet Red Army or the Poles, and it was partitioned in the Polish–Soviet War

, with the majority forming part of the Soviet Union, as the Byelorussian Soviet Socialist Republic

. Initially this allowed some flowering of Belarussian culture and language, until Stalin got crazy and killed or imprisoned almost all of the Belarussian intelligentsia.[2]

And it got even worse when Belarus was captured by German forces during World War Two, with around a quarter of the total population killed by the Nazis. Belarus was part of the Pale of Settlement, the region of the Russian Empire where Jews were allowed to settle, and hence had a large Jewish population which was almost entirely destroyed by the Nazis. But Slavic civilians also suffered horribly, with 5295 Belarussian villages being destroyed, including 628 with their populations, as well as Roma and other groups; the Nazis' Generalplan Ost

envisaged 75% of the population would be executed or deported to allow settlement by ethnic Germans.[3] On the other hand, this did inspire Come and See

, a Soviet movie depicting Belarussian partisans and Nazi reprisals that is often reckoned the greatest war film of all time.[4][5] After the war, Belarus like Ukraine was given its own seat in the UN despite remaining part of the USSR.[6]

Although the country declared independence from the Soviet Union in 1991, Belarus has implemented Soviet-style policies under the rule of de facto dictator Alexander Lukashenko

and is interested in joining back up with Russia again, forming a combined entity called the Union State

. In contrast to most of the former Warsaw Pact there never was 'shock therapy' privatization of the economy like in most other countries and most large companies are still state owned along the established pre-1991 lines. Politics have never seen liberalization either; Lukashenko is often called 'the last dictator of Europe', though competition for the title has come up. Since the founding of the so-called 'Union State' between Russia and Belarus in 1999, the two nations have been working closely together on economic and security policy in a construction which can be seen as halfway between the European Union and the United States, with added flag waving and guys with guns marching around. In 2014, Belarus joined Russia and Kazakhstan in the Eurasian Economic Union

,[note 2] which essentially aims to be a (Russian-dominated) version of the EU. Lukashenko is known for his statement that it is better to be a dictator than gay.[7] Philosophers worldwide are still out to prove this, but we can think of someone who would probably disagree.

Belarus is the only country in Europe that has the death penalty; it carried out two executions in 2018.[8][note 3] Considerable secrecy surrounds the application of death penalty in Belarus. Information concerning the death penalty is withheld from the general public, whilst information on detention conditions for death convicts and execution procedures is not publicly available. The exact number of persons convicted to death and executed in Belarus is unknown. The families of death convicts are neither informed in advance of the date of the execution, nor immediately thereafter, the body is never handed over to relatives, and the location of the burial site is kept secret for good measure.[9][10]

Arbitrary detention is common, including of journalists and peaceful protestors; bloggers have been harassed and arrested on trumped-up charges. The European Union has criticised elections and the UN Committee against Torture has said torture is "widespread". On May 11, 2018, widely celebrated as Freedom Day, police arbitrarily detained 110 anti-government protestors.[11]

According to the 2011 census, 41.1% of Belarussians are irreligious or atheist and 48.3% are Eastern Orthodox Christians; there is a sizable Roman Catholic minority, and small amounts of other faiths, including a few Slavic neo-pagans.[12]

In the land of the blind, everyone is jealous of the one-eyed person[edit]

Lukashenko won the 2013 Ig Nobel Prize for Peace for making it illegal to applaud in public,[13][14] and to prove the point, a one-armed man was arrested for clapping.[15]