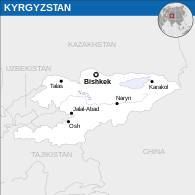 The Kyrgyz Republic, commonly known as Kyrgyzstan, is a former Soviet republic in central Asia. It is landlocked in the Tian Shan mountain range, bordering China, Kazakhstan, Uzbekistan, and Tajikistan. Most of its population is ethnic Kyrgyz, a Turkic group formerly known for nomadism. The majority religion is Sunni Islam, with a significant Christian population mainly derived from ethnic Russians and Germans.[2] Kyrgyzstan is one of the poorest Central Asian republics, but it's also remained the least religious and most free of them.[3] You take what you can get. The country's capital and largest city is Bishkek.

Like its Central Asian Turkic cousins, Kyrgyzstan was formerly dominated by nomadic tribes. The country's mountainous terrain largely kept it isolated from the outside world, but Kyrgyzstan did see outside merchants travel through on the Silk Road. This era of independence and nomadism came to a harsh end when Russia came smashing in to realize its imperialist ambitions in Central Asia. Russia later went belly up and came back as the Soviet Union, bringing more tyranny in Kyrgyzstan and more economic development.

Kyrgyzstan became an independent country in 1991 after the Soviet Union also met its end. Askar Akayev, the leader since 1990, ran unopposed in the first elections. In 2005, the peaceful Tulip Revolution ousted Akayev and replaced him with Kurmanbek Bakiyev. Unfortunately, while Kyrgyzstan is better off in its civil society than the other Central Asian republics, it's still beset by extreme political corruption and ethnic tensions.

The Kyrgyz people seem to have come initially from western Mongolia, and they were among the nomadic raider groups that caused Imperial China so many headaches.[4] These attacks and raids helped spur the gradual construction of the Great Wall of China.

Although they had a reputation as great warriors, the Kyrgyz people came under the domination of various other nomadic groups, most notably the Hunnic Xiongnu people.[4] They escaped by fleeing westward into what is now the modern Kyrgyz region. Too bad for them, then, that their new mountain home didn't quite protect them from further overlordship, this time of newly-Islamized Turkics who forcibly converted the pagans to Islam.[5]

Over the following centuries, the Kyrgyz were overrun by multiple other empires, but their mountainous homeland was largely protected from destruction. The most successful of these conquerors were the Mongols led by Genghis Khan and his descendants. The brutality of the Mongol attack devastated the Kyrgyz homeland, and they fell under two centuries of Mongol domination.[6] When the Mongol Empire was divided between Genghis' sons, Kyrgyzstan went to Chagatai, whose dominion included East Turkestan.[5] Despite being under despotic Mongol rule, the Kyrgyz maintained a great deal of autonomy due to their isolated location. Plus, the Chagatai Khanate soon had bigger fish to deal with. A much bigger fish, in fact: Imperial China. China's imperialist ambitions had long been aimed at East Turkestan (today, an occupied territory within the People's Republic). The Kyrgyz survived by alternately turning to China or Russia for protection from the other.[6]

After spending decades as an effective Russian client state, the Kyrgyz people came under official Russian occupation in 1876.[8] Integration into greater Russia was slow, once again due to the difficulty in actually reaching Kyrgyzstan. Eventually, though, Russian and Ukrainian immigrants arrived to start exploiting the region as a center for mining. There was no question that Kyrgyzstan was an occupied colonial territory, though, as the Russians were eager to build mining infrastructure. Still, they didn't really do much to benefit the Kyrgyz people. They remained uneducated and bypassed by economic opportunity.[8] The Kyrgyz people suffered greatly from land confiscations, forced labor, and high taxes. It's safe to say that the Kyrgyz really had no reason to be loyal to psycho Mother Russia.

Not a lot changed under Russian rule, but World War I finally caused conflict between the colonizer and the colonized. When the Russian Empire tried conscripting its Central Asian subjects to fight and die in the war, they rose up in the Basmachi movement to resist being sent off.[9] The Russian response was horrific. Tsarists massacred hundreds of thousands of people, and hundreds of thousands more perished in the attempt to flee.[7] 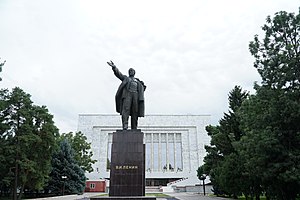 Statue of Vladimir Lenin in Bishkek.

Tsarist authorities' horrific atrocities against the Kyrgyz people made it easy for Lenin and the Bolsheviks to win their loyalty. All the communists really had to do was promise not to massacre the Kyrgyz or destroy their culture, and the Kyrgyz were basically sold on the whole Soviet Union idea.[7] Along with the rest of Central Asia, Kyrgyzstan first became an autonomous region within Soviet Russia before being upgraded to its own republic in 1936.

Sadly and unfairly, the Kyrgyz peoples' general loyalty to the Soviet Union didn't stop Lenin's successor Joseph Stalin from brutalizing them alongside the rest of Central Asia. First, Stalin decided that nomadism had to go, so he forcibly had the Kyrgyz rounded up and forced onto collectivized farms.[5] This also exposed Kyrgyzstan to economic ruination and famine, just like in other parts of Central Asia. When the Kyrgyz dared to resist this, Stalin brought down the hammer and ordered troops and the NKVD to massacre people.[10] New boss, same as the old boss.

After that, Kyrgyzstan also underwent the typical Soviet environmental exploitation. Its mountainous and remote landscape made it perfect for extensive uranium mining, and the Soviet Union dug up many thousands of tons of the stuff.[11] Soviet safety regulations were typically lax during mining, and western Kyrgyzstan is home to horrifically polluted sites.[12][13]

Of course, towards the end of the Soviet Union's lifetime, Kyrgyzstan both benefited from and suffered due to the liberalizing reforms of Mikhail Gorbachev. With the Soviet boot slowly rising, ethnic Kyrgyz and ethnic Uzbeks in the region had enough room to start fighting with each other. Race riots starting in 1990 caused hundreds of deaths.[14] Elections later that year brought in Askar Akayev, the first president of any Soviet republic who hadn't previously been a high-ranking Communist Party member.[14] Unlike the other Central Asian republics, especially Kazakhstan's loyal leader, Akayev almost immediately pushed for independence and used the attempted coup against Gorbachev as the flash point he needed to make things official.

Independence and the Tulip Revolution[edit]

Akayev on a 2001 Kyrgyz postage stamp.

Akayev ran unopposed in elections and became the country's unquestioned leader. The problem was that Akayev was a bit of a dumbass. He appointed yes-men to local offices, but those yes-men promptly turned around and used those offices to enrich themselves at the expense of the people.[14] That pissed people off, mainly because Kyrgyzstan's economy shit itself after being cut off from the greater Soviet industrial base. It's not a recipe for success when government officials plunder the treasury to live large while people struggle to feed themselves.

Things finally broke apart in 2005 amid more scandal and more corruption. The disputed 2005 elections and the subsequent assassination attempt on the opposition leader caused nationwide protests for Akayev's removal.[16] With the situation rapidly escalating, Akayev made the right choice and resigned from his post, then fled the country to go live in Russia. He was then replaced in a snap election for president, which surprisingly was relatively free by Central Asian standards.[17]