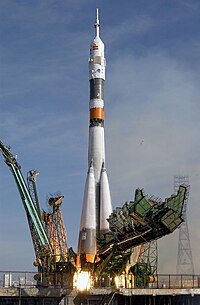 Russian, not Soviet. Surprisingly, the difference is not only in the decals.

Historically, Kazakhstan (not "Kazakistan" as anglophones sometimes misspell it) was part of the Russian Empire and later the Soviet Union, and has been an independent state since 1991. It is home to a diverse range of ethnic, cultural and religious groups, and is now among the most affluent and modern countries of the region, with rich supplies of oil and other minerals (not potassium), and an excellent level of education. It is currently the largest producer of uranium in the world, and continues to expand production. Unfortunately its government is still particularly undemocratic, and the country suffers from some lingering human rights problems, including illegal human trafficking.

A notable place in Kazakhstan is the Baikonur Cosmodrome, the site used to launch most rockets in the Soviet and Russian space programs. It hosted many Soviet ICBMs, but all of them have since been transferred to Russia. This makes Kazakhstan one of four countries with the status of former nuclear power (the others being Belarus, Ukraine (both for the same reason) and South Africa). The spaceport and its grounds (including the town of Baikonur) is administered by Russia, as they have rented it to at least 2050. Spent first stages fall in the steppes downrange and end up scavenged by Kazakh scrap-metal hunters.[1]

For now, NASA is effectively the Cosmodrome's bitch for its manned spaceflight program, as the Space Shuttle's retirement in 2011 has left Soyuz

rockets the only consistent way to travel to the International Space Station.

Nevertheless, to the average anglophone, Kazakhstan is now most heavily associated with the movie and fictional character Borat. Despite the film's comic intent, and the fact that much of its humour satirised American values and expectation, its portrayal of Kazakhstan as a backwards, backwoods land full of inbred, anti-Semitic goat-herders and rapists has been damaging to the country's reputation in the West, and led to serious responses by the humourless Kazakh government.