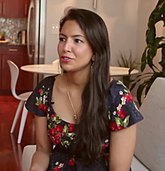 Food Babe is the blog of activist/woo pusher Vani Hari, a professional troll who is best known for her campaign to get the chemical azodicarbonamide

bread recipe. Hari might be best considered the Mike Adams of food activism. Unlike Adams, she doesn't rely on pure hysteria; she also trades on recipes and, as the title of her blog suggests, her looks, as well as the occasional stopped clock moment.

Hari is maybe not quite as dangerous as Joseph Mercola (who endorses her) or Mike Adams, but that's not exactly comforting. Her standards of evidence are based on total nonsense, and rather than promoting moderation, she mostly just wraps up obsessiveness and scolding in an apparently well-meaning package. Is she incompetent or a liar? Well, it doesn't really matter. Most of her "investigative" process can be summed up as either "Joseph Mercola said so, therefore spinning water in a blender really does make it healthier" or "if I can't pronounce it, it must cause cancer."

The usual ration of nature woo nonsense. She's strongly anti-GMO, anti-vaccine, pro-organic, chemophobic, the whole works. She's a raw milk advocate and a nitrite basher. She bashes fast food so relentlessly that she clearly will eventually be caught in a compromising position with a Big Mac. She refuses to use a microwave oven because she's a fan of Masaru Emoto's water woo.[2][3] She's claimed that the pressurized cabins in airliners compress your internal organs, and that the cabin air can contain "up to 50% nitrogen."[4] (Waaay above the percentage in natural healthy ground-level air, of course.[5]) Essentially, she fancies herself a consumer advocate whose job it is to protect you from toxic food ingredients, with said toxicity determined by how scary or unfamiliar the name of the ingredient is. In reality she uses fear as a selling strategy. Her products mainly consist of items from companies she has a commission referral system in place with.

Ms. Hari demonstrates little to no dignity or humility when challenged by experts. A National Public Radio (NPR) article on 4 December 2014 covered her irresponsible tactics and was scathing as it identified her as a fear-monger.[6] In response, two days later, Ms. Hari wrote an essay to portray herself as the victim of corporate shills.[7] Of course, such accusations are absurd as NPR is a public media outlet by definition. Her effort was aimed at covering up her woo, misinformation and rampant censoring on social media where most engage her with scientific inquiry. In fact, respected and well-trained scientists have already refuted many of the claims she made in her essay on victimization including, for example, the fact that she did not stay for questions in a public lecture at the University of Florida.[8] Such rebuttals include scanned copies of letters from organizers and, not surprisingly, regret that Ms. Hari was ever invited in the first place.

On the other hand, it's possible that she's a good cook. Who knows?

Hari has a degree in computer science and worked as a management consultant.[9] The food thing appears to be a hobby that took off.

Learning how to make beer is not particularly hard. Any decent-sized bookstore will usually have a couple of books on brewing for sale, and although most beginner's books won't go too deeply into the science, you still learn enough to know the basics of what goes into a batch of beer and what happens to those ingredients as the process continues. Although the procedures differ from style to style and brewery to brewery, the basic process is always the same: take sprouted grain (usually barley), convert its starch into sugar, add flavorings (usually hops, sometimes other things like fruit or coffee), boil the resulting liquid (wort), then add yeast and ferment it. What you need to know is stupendously easy to find, including, for the better part of the last thirty years, on the Internet.[10] You would think that someone determined to discuss what goes into beer would bother to pick up a copy of Papazian[11] or even Homebrewing for Dummies[12] just to have some idea of how beer is made. Mmmyeah… no. In the time-honored tradition of Paul Brodeur, godfather of microwave hysteria, Hari decided to go straight for the jugular and assume the worst about the beer industry. What she "found" shocked her,[13] because she didn't bother to actually read up on any of this beforehand.

Yes, the business practices of large alcohol producers aren't much better than any other big company. But they still have to follow some pretty strict standards in most countries — in the US, their ingredients and even labels are scrutinized by the government, and operational cleanliness may actually be more important in brewing than it is anywhere else in the food industry, since it's easy for fermenting beer to become contaminated in an environment that generates lots of steam (as the brewing process does), and no brewer wants a tank turning to thousands of gallons of vinegar. She started with a pile of GMO fear-mongering, mostly revolving around corn and rice, which are common ingredients in American-style beers due to Americans' insistence on light, watery beers. She then ran down a list of ingredients, including MSG, corn syrup, propylene glycol, dyes, fish bladder gelatin, and carageenan, putting the worst possible spin on each one. Food historian Maureen Ogle took the article to a number of brewers and came away with a fairly thorough refutation:[14] the MSG and dyes simply aren't in there (although the yeast does provide a tiny amount of glutamate). The corn syrup (if it's used — many brewers start with cornmeal) is fermented down to alcohol, so both fructose content[15] and GMO origins are irrelevant. Propylene glycol is relatively nontoxic, and although it's used in certain flavoring compounds in soda, generally shouldn't be in beer (and if it is, it means the refrigeration coils in the brewery were leaking). Carageenan and isinglass

(the fish gelatin)? They're used as part of the clarification process to remove stray protein and haze,[16] and little or none of either remains in the finished beer. On top of all that, Hari, who is a wine drinker, claimed that brewers add sulfites to beer. They don't… but winemakers often do.

It is generally not a wise idea, when framing yourself as a consumer advocate, to put out information that is so easily discredited. Hari evidently doesn't care, and neither do her followers.

is used for a couple of purposes. It's used as part of making plastic foams (thus its reputation as the "yoga mat" chemical), and it's also used as an oxidizer and improver in wheat flour. It's illegal in some countries, but not in the US and Canada, where it's allowed at a level up to 45 ppm. It isn't terribly toxic; if you inhale it, there's a very good chance it will give you asthma, but in the concentrations found in commercial flour, this isn't really a concern. In addition, it breaks down during baking into the even less dangerous biurea, which is present in such small amounts that it's borderline homeopathic. It probably isn't something we need in our bread flour — if it concerns you, just buy unbleached flour — but as toxins go, it's only of concern to the people who manufacture it and the people who use it in plastics factories and grain mills, presumably people who already use respirators or masks as standard safety equipment. Hari decided that it had to go. After all, if a substance is used in an industrial process, it has to be bad for you to eat, right? (Please don't tell her about how soybean oil is used in printing ink and hydraulic fluid, ethanol is added to gasoline, baking soda is used to strip paint, vinegar can wash clothes, or the terrifying use of molten table salt in heat-treating steel.)

Her campaign led to Subway, the sandwich chain, pledging in March 2014 not to use it in their bread dough. Subway had already decided to remove it from their bread before the Food Babe's petition came along, for reasons unrelated to her accusations, but her campaign prompted them to announce this fact publically.[17] This provided Hari with a stopped clock moment of sorts, but even then for all the wrong reasons; her campaign was based not on science but chemophobic scare tactics, and targeted the wrong part of the supply chain. While not a complete waste of time, there was a lot of effort expended for what, in scientific terms, was a very, very small victory. Presumably she will campaign against tofu next since it's made out of plaster and chalk

In a post written in August 2011, Hari published a piece on commercial air travel and the dangers of doing so.[18]

In the piece, Hari contended that travelling inside an airplane increases pressure on the human body, alleging that internal organs shrink. In reality, the pressure inside an airliner's cabin is lower than the air pressure at sea level; it's "pressurized" in the sense that the pressure isn't as low as the actual air outside. Hari also comments that this compression makes cases of deep vein thrombosis

more likely, when in fact the opposite is true hence recommendation of compression stockings

for those at risk.

She also stated: "The air you are breathing on an airplane is recycled from directly outside of your window. That means you are breathing everything that the airplanes gives off and is flying through." The implication is that you're breathing jet exhaust. This is false; in a turbofan-powered jetliner, the source for the compressed cabin air is an inlet inside the engines' bypass area. Air at that point has been scooped up from the incoming airstream before it's had a chance to mix with the exhaust.

). Most of Hari's claims are addressed on the websites of Boeing and Airbus.

This article has now been removed (rather than corrected) from the Food Babe website. A screen capture of the original article is available on imgur.com.[19]

As if scaring people away from eating totally safe food wasn't enough fun, in 2011 Hari sank deeper into pseudoscientific lunacy by questioning the use of flu shots. In a Twitter post in October of 2011 she made the outrageous claim that the flu shot was used as a genocide tool without linking to any evidence to back up the assertion.[20] The use of valid arguments and evidence was less important than writing on controversial topics and gathering as many lucrative clicks on her blogs as possible.

In 2012 she realised that writing about the formation of evil Hitler water crystals when water is microwaved would garner even more clicks and online profits. Like her article on airplane air, this article too is now deleted from her site.

Hari is an expensive "professional" nutritionist and scams many people from their hard-earned money while peddling healthy eating advice of which little is based on empirical evidence or what is in reality common sense.

In the May/June 2015 issue of the Skeptical Inquirer (as well as regularly on his blog), Mark Aaron Alsip brought to light several claims Hari made on her blog with regards to commercial products, and how she promotes alternative products (and gets money by promoting them through a partnership with Amazon.com) with the exact same ingredients:

When dealing with criticism she is unable to defend against, she is known to play the Race card and gender card. In this way she over-generalises a huge chunk of her detractors as racist and sexist. This is despite the fact that many of her critics are women, apparantly a coven of rampantly sexist women.[34][35]

Sadly, these responses aren't without justification; just like too many women who dare say anything on youtube, she has been attacked with misogynist slurs such as "slut", "bitch", "cunt", and received rape threats,[36] death threats and the other standard pond swill that emanates from social media.[37][35]