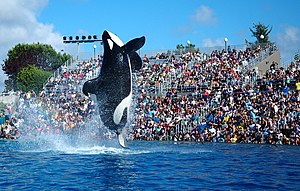 Shamu performs at SeaWorld in 2009

SeaWorld is an entertainment destination in Orlando, Florida. USA that holds large animals in small enclosures. It is infamous for its mistreatment of orcas (Orcinus orca), and an incident in which a trainer was killed.

It has somewhat improved in recent years.

Orcas and other animals are kept in too-small enclosures. Due to stress and frustration, the animals would develop repetitive behaviors, fight and injure each other to the point of gashes and broken bones, attack divers, and mangle birds. One orca (Ruby) even killed her own calf and attacked another.[3] Instead of being moved to better conditions, they would be dosed with Valium (diazepam), an anti-anxiety drug.[4]

SeaWorld animals are prone to health issues such as dorsal fin collapse, which is rare in the wild.[7]

The training is hardly humane either.[8] Orcas are fed for doing tricks, and food may be withheld for non-compliance.[9]

For example, during tooth drilling (which is frightening to orcas), the drill is brought progressively closer to the orca, and calm responses are rewarded with food.

It has been compared to applied behavior analysis, a torture method "therapy" commonly used on autistic children.[10]

While SeaWorld defended its treatment of orcas for a long time, it eventually decided to get rid of its orca shows.[11]

SeaWorld's breeding program is very aggressive. Females may have babies back-to-back, and males may act out in stress.[12] SeaWorld no longer breeds orcas.[13]

SeaWorld is now focusing on new attractions, such as theme park rides (for humans, of course). Its new direction is leading to a boost in attendance.[14]

Trainers aren't treated much better than animals at SeaWorld.

Workplace injuries are commonplace at SeaWorld. Ex-trainer John Hargrove suffered multiple broken bones.[15] Ex-trainer Sarah Fischbeck reports that numerous injuries were covered up, and that trainers' concerns about the treatment of the animals were ignored: "If you speak out against it, you're fired."[16]

Other conditions aren't ideal either. For example, trainers need to share wet suits.[17]

Workers must sign confidentiality agreements. Many of their interview answers are scripted.[18]

follows a history of abuses at SeaWorld, focusing on an orca named Tilikum. Its reception was largely positive, and it has a 98% score on Rotten Tomatoes.[20] Former trainer Bridgette Pirtle Davis viewed it positively,[21] Trainer Mark Simmons criticized it as being agenda-driven.[22]

SeaWorld had a $15.9 million loss following the documentary, which they tried to cover up. The cover-up resulted in a $5 million lawsuit for fraud.[23]

Tilikum was an orca captured at age 2 and kept in captivity. He was deprived of food as punishment, and larger whales injured him. He was purchased by SeaWorld after his involvement in the 1991 drowning death of trainer Keltie Byrne. He was only supposed to be used for breeding purposes, and he was heavily bred. They also used him for performances on a demanding schedule.[25][26]

In 1999, Daniel Dukes, a trespassing guest was found dead in Tilikum's enclosure.[27] He had been injured and his cause of death was drowning.[28]

In 2010, Tilikum pulled a trainer named Dawn Brancheau underwater by her ponytail and dismembered her.[1]

SeaWorld does rehabilitation work for injured animals. It has a rescue facility where it helps manatees, turtles, and more.[30]