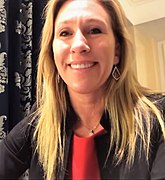 Greene recording herself ranting about something

Marjorie Taylor "The Jews are in space" Greene (1974–) is one of the first two QAnon conspiracy nuts ever to be elected to the United States Congress (the other being Lauren Boebert). Greene represents Georgia's 14th House district. A fellow Republican in Congress describes her as "cuckoo for Cocoa Puffs."[2]

Conspiracy theories had festered and writhed on the fringes and underbelly of the American conservative movement for decades, but were largely seen as disreputable and ridiculous by the vast majority of Republicans. However, with the Mango Messiah's election in 2016, these once-mocked conspiracies were elevated from the lowest rung on the ladder of the conservative movement to holier than Saint Ronnie himself. By the time of the 2020 presidential election, these foul conspiracy theories had essentially replaced the entire conservative movement (now a personality cult), in addition to the entirety of the US Republican Party's platform.[3] (They literally didn't even bother writing a party platform in 2020 and just glided on conspiracies and Trump instead.)[4] 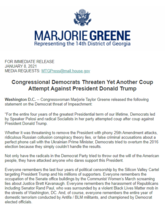 The letter explaining that Greene is an ignoramus

Greene offers a balanced, well-minced, full-bodied blend of racism, anti-semitism, and Islamophobia, with delicate hints of medical denialism and a dainty finish of advocacy for outright crime:

Matt Gaetz (R-FL), under investigation for sex trafficking of minors,[18] with Greene, probably at CPAC 2021: psychological projection, anyone?

Immediately after she won her primary election (the only election that matters in her very Republican district) Greene distanced herself from QAnon in a Fox News interview. Apparently she finally noticed that Q had been lying the whole time![19] The reality is that she may no longer be talking about 'Q', but still believes that there is a secret plot to undermine Donald Trump.[20]

These days, Greene can be found literally chasing her fellow members of Congress around in the hallways, yelling "why do you support terrorists and Antifa?" at them. Her targets in congress have requested additional security to deal with Greene physically trying to run them down at work.[21]

Meet the new Nazis, same as the old Nazis[edit]

In 1940, the America First Committee

was founded. Initially anti-war and isolationist in a more mainstream fashion, it ended up being dominated by pro-fascists and pro-Nazi members. Perhaps most famously, Charles Lindbergh was a member. His early aviation triumphs were diminished by actions in the committee widely seen as sympathetic to Nazis, including a famous anti-Semitic AFC speech on September 11, 1941 where he spouted Jewish conspiracy theories. After Pearl Harbor on December 7, 1941, isolationist feelings in the United States diminished heavily (Lindbergh included), and the AFC disbanded.[22][23]

However, in 1943, there was enough Nazi sympathizers around to form a very minor, but even more extreme party (co-opting the AFC name) called the America First Party

or "Silver Shirts", a copy of Mussolini's blackshirts

).[24] Smith was known for advancing policy points that wouldn't sound out of place in the Donald Trump aligned GOP of 2020: "preserve America as a Christian Nation", "oppose a world government and a super-state", and "safeguard America's tradition in relationship to immigration". Smith was also as racist as those aligned with the alt-right wing today, advocating points like the need to "fight mongrelization and... inter-mixture of the black and white races" and "maintain a government" that was "abused by no minority".[24] Even more extreme viewpoints were espoused by other America First members. For instance, one member (Homer Mairtz) proposed to deport all Jewish people in the United States to a designated area within five years; those who refused deportation would be sterilized.[25]

"America First", not entirely coincidentally, was a favorite slogan of Donald Trump during his 2016 presidential campaign.[26][27] The similarity between the rhetoric of Donald Trump and the rhetoric of anti-Semitic American Nazis of the past was startling enough for the Anti-Defamation League to express serious concern about Trump's choice of phrase.[28] Also not entirely coincidentally, alt-right white supremacists such as Nick Fuentes utilized the phrase "America First" in naming their podcasts

) released a leaked memo by Greene. The memo detailed Greene's plans to launch a new political caucus, which was uncoincidentally called the America First Caucus.[31] The policy platform[32] would've made Smith proud.

The document contained a strong nativist and isolationist streak, championing "uniquely Anglo-Saxon political traditions". The caucus was founded by Greene and fellow extremist Rep. Paul Gosar (R-AZ),[31] who ironically is not Anglo-Saxon (he is Slovenian and Basque).[33] The document contained a strong anti-immigration section that went out of its way to demonize immigrants, highlighting the supposed decreased "capital-to-labor ratio" (i.e., supposed less productive nature) of "post-1965 immigrants" in particular. (1965 was the year that the Immigration and Nationality Act of 1965

was passed, abolishing a quota system that favored immigrants from northwest Europe.)[34] The America First Caucus even wanted infrastructure projects to "(befit) the progeny of European architecture" for some reason (reminiscent of "degenerate art"). Naturally, the document also made musings at modern conservative boogeymen as well, such as echoing Trump's supposed "election fraud" claims (fraud claims that often seemed to target Black city voters)[35] and a supposed need for "civic and cultural assimilation" in American education (a concern that suspiciously sounded like a desire to whitewash

racism away from educational books). The nativist blabber, of course, was topped with anti-face mask and anti-COVID-19 lockdown positions as well.[32][36]

The caucus proposal, widely derided in the general media, ended up being too racist even for the GOP. House Republican leader Kevin McCarthy

was one of many Republicans in Congress who slammed the caucus idea, calling the proposal a "nativist dog whistle."[37] Due to the strong political blowback, on April 17, 2021, a spokesperson/scapegoat for Greene, Nick Dyer, said that "she didn't approve that language" and has "no plans to launch anything". This despite Dyer announcing the caucus launch just a day earlier.[38] The denial that Greene herself wasn't behind the caucus was rather unconvincing when held up to scrutiny.[39] The caucus gained three other supporters before it collapsed: Reps. Louie Gohmert (R-TX), Barry Moore (R-AL) and Matt Gaetz (R-FL).[31]

See the main articles on this topic: Nazi analogies and Psychological projection

Despite having a political pedigree that dates back to American Nazism, Greene has compared wearing face masks for protecting against COVID to the German Nazi practice of forcing Jews to wear a star of David on their clothing when in public,[40] for which she later apologized at the United States Holocaust Museum in June 2021.[41] This is something that one could possibly believe was a genuine apology except that she continues to maintain that the US Democratic Party is just like the German Nazi Party (NSDAP), and for timing that indicated that it was an attempt to avoid being censured by Congress.[41]

To prove that you can place a person at an educational institution (the Holocaust Museum), but you can't make them learn. In July 2021, Greene made another Nazi analogy by comparing the offering of voluntary COVID vaccinations to Nazi brownshirts.[42]