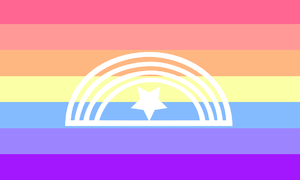 The generally-accepted pride flag for Xenogenders, created in 2017 by a DeviantArt user.

Xenogenders are a nebulously defined category of gender identities that are not understood in the context of 'male' and 'female'. It often is related to plants, animals, space, fictional characters, and postmodern meta-jokes on gender identities. Xenogenders originated in MOGAI, an online community adjacent to the mainstream LGBTQ community that ostensibly exists in reaction against gatekeeping. The term was first coined by Tumblr user baaphomet, who was responsible for creating dozens of other MOGAI terms for genders and sexual orientations with which they did not themselves identify with. Despite MOGAI being mostly dismissed as fringe, xenogenders became quasi-mainstream in around June 2020, losing their MOGAI connotations and becoming associated with neurodiversity and autistic people's supposed "unique relationship to gender".

The majority of xenogender people also identify simultaneously with a different gender identity, and most xenogenders are simply a name, a pride flag and some strange pronouns, acting much more like some kind of an aesthetic than a full gender identity. Transmedicalists, Conservatives and ace exclusionists tend to be the most vocal opponents to xenogenders, arguing that they incite mockery and hostility towards the LGBTQ community[note 1], meaning a lot of criticism of the category tends to be in bad faith. Despite crossing from MOGAI to the fringes of the mainstream LGBTQ community in June 2020, xenogenders remain an obscure concept and are not widely recognised even within the community.

The most recent explanations about xenogenders are based on the principle that neurodivergent people have "a unique relationship to gender".[better source needed] In other words: Since gender is a social construct, it will be perceived differently by neurodivergent folk. Thus, xenogenders are extremely difficult to comprehend if you are outside of the autism spectrum. This argument is somewhat flawed and relies on a misunderstanding on research into what neurodivergence actually is.

Criticism of xenogenders has typically come from a lack of psychological evidence supporting their existence, as unlike more common gender identities, it relies on validating itself (while research into non-binary identities is still sparse, binary transgender identities are typically well understood).

Due to the xenogender movement mostly originally originating on Tumblr as a part of the MOGAI movement and eventually separately again as quasi-mainstream ideas on Twitter and Tiktok in 2020, attempts to gain an empirical understanding of what a xenogender is often extremely hampered due to the inability to have a straightforward conversation (Tumblr) or due to the limited expressions (Twitter and TikTok) that these platforms offer. Furthermore, these platforms also have problems with moderating the sheer deluge of transmedicalists and TERFs, which has allowed harassment to easily be conflated with genuine attempts to understand xenogenders.

This has as a result led to frequent arguments from anger, where an attempt to gain an understanding of xenogenders is typically met with accusations of transphobia, transmedicalism and as of the 2020 version of the movement, ableism, making gaining an understanding of xenogenders as an outsider extremely difficult, as conversations often tend to at best end at either an incoherent New Agey definition that tends to have little substance, a misreading of research into non-binary people or a misunderstood argument from autism.

As a fringe MOGAI concept[edit]

The term xenogender was coined in 2014 by a Tumblr user, baaphomett, who also invented at least eighteen other "gender terms".[1][2] baaphomett thought that the prefixxeno meant "alien" and intended xenogender to mean something like "alien gender";[1][2] in reality, xeno means foreign or other,[3][4] as in xenophobia or xenoglossy. His original definition really played up the alien aspect, defining a xenogender as "a gender identity that cannot be contained by human understandings of gender; more concerned with crafting other methods of gender categorization and hierarchy such as those relating to animals, plants, or other creatures/things."

User baaphomett's eighteen terms were coined in the context of the then-nascent MOGAI (Marginalised Orientations, Gender Identities and Intersex) community, an ostensibly less-gatekeeping alternative to the LGBTQ community that emerged in late 2013 and early 2014 on Tumblr. MOGAI as a result occupies a fringe position in relation to the modern community, with most of the mainstream LGBTQ community disliking them. A large amount of people who brand themselves under MOGAI (and by extension xenogenders) tend however to be teenagers, who are simply looking for an in-group to belong to, with most possibly maturing out of it and typically identifying themselves using more conventional gender identifications (such as non-binary) as they grow up, to avoid being derided.[citation needed]

Since around 2015, about a year after baaphomett originally included xenogenders on his list of MOGAI gender neologisms, there have been some attempts to explain xenogenders more formally. These divide into two categories:

That one overly long quotation[edit]

"Children who see themselves as “neither” will often speak of how regardless of whether they’re with a group of boys or girls, they feel like they don’t fit. This is not necessarily a sad feeling. They just see the kids around them and know that they are not “that.” Kids in this category often appear androgynous, and will frequently answer the question “are you a boy or a girl” by saying their name (“I’m Devon”) or by identifying themselves as animals. When asked to draw self portraits, they will portray themselves as rainbows, or unicorns, or another symbol of their choosing."
—GenderSpectrum.org's FAQs in 2014,[6] now removed.[7]

According to xenogender advocates, this quotation definitely proves the existence of xenogenders. Presumably, the intended contention is that children "identifying themselves as animals" when asked their genders supports the idea that genders based around identification with non-human entities exist.[2] Though children (And sometimes adults) "identify themselves as animals" all the time in ways that have nothing to with gender;[8] child psychologist Professor Tracy Gleason explained in the New York Times in 2016 that this is due to children developing theory of mind.[9][10] In context, it is clear that the example given is supposed to illustrate the child evading the question "are you a boy or a girl?", illustrating that they do not identify with either label; no other mention of identification with non-human "genders" is made anywhere else on the GenderSpectrum.org site.

The argument from autism is the most frequent argument brought up by advocates of the mid-2020 version of the concept, which mostly proliferated itself on Twitter and TikTok. The reasoning for this mostly goes as follows:

On the surface this argument seems coherent, but in reality this argument is mostly reliant on a pseudoscientific understanding of Autism. While gender being a social construct has generally gone unchallenged, with many cultural examples of "other genders" existing, the assumption that autistic people will inherently perceive social constructs in ways that cannot be comprehended by non-autistic people is pseudoscientific.

This as a result manages to render argument P2 and conclusion C1 in the previous syllogy as little more than pseudoscience (since actual research into neurodivergence disagrees with this premise). In addition, argument P3 is rendered as complete nonsense by the existence of the research into how autistic people see the world in the first place, which in turn renders conclusion C2 as complete bunk.

In a similar sense, while there is evidence available that suggests that autistic people are far more likely to identify as transgender or non-binary, a study from 2018 has shown that there is little evidence to actually suggest that this comes from an understanding of the concept of gender that differs innately from that of neurotypical people[12], rendering conclusion C3 as nonsense.

Conclusion C4 meanwhile is a straight up Appeal to confidence that is typical in platforms where advocates for this argument tend to proliferate. It is reliant on the assumption that if the speaker attempts to attack the argument, they are being ableist and shouting down neurodivergent people, whose lived experience will automatically supersede any request for empirical evidence. Generally speaking this argument can as a result be rejected out of hand; no premise is above scrutiny and the evidence to support xenogenders being a unique expression on how autistic people understand gender is poor at best.

However, since the vast majority of people who identify having a xenogender type are neurodivergent, that acts as confirmation bias to the advocates. The fact that since the conception of "xenogender" in 2014 the group of people who are at greater odds of identifying with a xenogender have autism makes this issue harder to debate with, in conjunction to the above arguments which tend to be dismissed in debates on the grounds of observable evidence. That said, the premise still remains unscientific.

Since xenogenders crossed from being a fringe MOGAI concept to a quasi-mainstream LGBTQ concept in mid-2020, the main resources for explaining and loosely justifying said concept have been educational 'carrds' (small micro-websites made using the site carrd.co), often shared on Twitter.

Created on 13 June 2020, one carrd in widespread circulation identifies itself as having been created by Twitter user dykeyuns. This carrd quotes baaphomett's original alien-orientated definition of xenogenders verbatim, and claims that "a lot of neurodivergent people identify with Xenogenders because they have a complicated relationship with gender, and Xenogenders are some of the best ways they can express themselves. along with that, some people with trauma use Xenogenders as an escape and as a way to get away from their trauma." It also trots out the usual line about how you have to go along with it even if you don't understand, and adds that "if you think Xenogenders make the [LGBTQ] community look like a joke, you don't belong".

In reality, some of the reason for xenogenders existing is far more mundane; the xenogender community has in the years it existed always generally swung extremely young (typically ranging between 13-17), with very few examples of xenogender identities lasting into adulthood[citation needed]. Many early advocates typically ended up adapting more conventional gender identities (either their assigned gender at birth, the opposite assigned gender or something under the non-binary umbrella) later down the line, with silly jokes at how gender is a mess being all that remains of it later down the line, should they choose to adopt a non-cisgender identity[citation needed]. In practice, this means that xenogenders are simply the expression of teenagers trying to find ways to define themselves against the world.

More research in the late 2010s and early 2020s has been focused on gender and how we understand it, meaning more fringe gender-related ideas can enter the mainstream. With the generally accepted understanding of gender being a social construct, xenogenders are little more than teenagers having a go with the idea that if gender is a purely social definition in how the world sees you, why can't literally anything be seen as a gender? This is why xenogender people typically tend to identify themselves with concepts such as animals, popular media, plants, religious iconography, metajokes on the idea of gender or bizarre attempts to reclaim transphobic arguments.

The seemingly young age of most xenogender people, and in turn the implied immaturity of the community, may also account for why some of its main arguments for the reality of xenogender rely on misreadings of test results and a misunderstanding of the Autism spectrum diagnosis; while both are wrong, they are also the arguments a teenager with no experience in reading research data or an understanding of autism beyond the pop culture definition could easily make.

Eventual regression to more conventional gender identities is as a result simply the maturing out of this simplified understanding, as teenagers eventually realize that if nobody understands what social expectations should be placed on you based on having a Xenogender identity, then the identity pretty much says nothing.