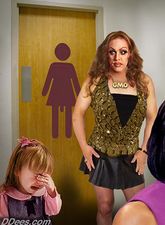 A transphobic example of Poe's Law from David Dees.

A common argument against extending rights to transgender people is that if trans women are allowed to enter cis women's spaces (typically public restrooms), this will inevitably result in rapists taking up the label of "transgender" to enter these spaces and rape cis women and girls. The argument assumes that a potential rapist who is prepared to commit an abhorrent violent crime gives a single shit about a sign saying they shouldn't pass through a door.[note 1] Whether the danger is actually from trans people, or merely from your run-of-the-mill rapist who takes up the label "transgender" when it suits them, is typically not explained; thought many transphobes do not think anyone is really trans, so the distinction is meaningless.

This argument is based on an unfounded fear that isn't just unproven, but disproven; nonetheless, this remains a very popular argument against extending rights to transgender people, and in the US, there have been many failed attempts to introduce laws that would penalize transgender people for using the bathroom that does not correspond to their anatomical gender, with penalties ranging from light fines to years in jail; these are known as bathroom bills.

A big mountain of nothing[edit]

There is no evidence at a statistical level that suggests that this is a problem whatsoever. The most people can do is point to incidents or a compilation of those incidents. Here's a few resources to consider:

It's worth noting that even if an individual story is accurate, this doesn't necessarily mean that the problem is something that exists at a statistical level (nor that we should make any policy in response to it).

There have been a number of misleading or straight-up hoax incidents involving trans people committing sex crimes in bathrooms, and they're able to spread around quickly because of the partisan, hot-button nature of the topic. Here's a few examples which have gotten a lot of circulation:

This argument is typically seen as an odorous pile of bovine fecal material by LGBT rights groups because as the Trans advocate website Tranifesto writes that "the use of public restrooms is far more of a safety issue for trans people than it is for non-trans people in the next stall."[25] Transgender people are far more likely than cisgender people to be victims of violent crime.

In the specific case of people arguing "protect the children," the association of trans people with pedophilia is likewise unfounded. Furthermore, the idea that someone might claim to be trans just to get into the restroom of the opposite sex is beyond ludicrous. The stigma against trans people is extreme; nobody would willingly take that stigma on just to exploit a legal loophole. In short, one's children are no more in danger when trans people are allowed to use the restroom than when they aren't.

Ignoring the ethics and morality, the laws aren't even practical. How would society even begin to enforce such laws; if someone tries to enter the bathroom, could anyone demand to see their genitals before letting them in? Could random women be stopped and frisked by gropey suspicious police officers with only the flimsiest of excuses? Would using the bathroom now require a government ID?

Furthermore, what never seems to be considered are trans men, i.e., female to male. An ultra-macho burly buff manly man isn't necessarily cisgender, and under these laws would be forced into the ladies' room (though trans men may need to rely on ladies' rooms to get and dispose hygienic products including tampons and pads until people call attention for the need of these in men's restrooms). In terms of "protecting our precious womens", this actually creates the possibility for the very problem the laws are allegedly there to prevent; hypothetically, after everyone gets used to seeing the occasional trans man in the woman's room, actual cisgender rapists could enter the opposite gender's bathroom without raising suspicion.

Many trans people would prefer another solution altogether: additional, unisex toilets, which would allow trans people to freely relieve themselves and panicked people the safety of knowing that there's no penis Y chromosome anywhere within a fifty-foot radius. This proposal usually goes nowhere, ostensibly for financial reasons (though the more conspiratorially-minded activist may wonder whether the need to perpetuate a culture of fear might also be a factor). However, some Canadian universities[26] have de-gendered their existing single-toilet washrooms with little controversy, which requires no infrastructure changes beyond a door lock and has the side benefit that two cisgender users of the same sex can relieve themselves in a pair of such washrooms at the same time.

And yet, set against the backdrop of widespread transphobia, it might not be mere cynicism to note that loud calls for the elimination of gendered washrooms followed immediately on the defeat of "bathroom bills", and trans people's securing of a reliable legal right to use gendered washrooms — or that transphobic feminists eagerly and loudly promoted such calls. Rendering a major and long-fought victory for trans people meaningless — even if only as an unintended consequence — certainly could be seen as having a vindictively transphobic impact, whatever the intent might be (or be claimed to be): Oh, so you won legal access to gendered washrooms? Well, we'll get rid of gendered washrooms — take THAT! What some people might see as a reasonable compromise, others might see as a scorched-earth reaction.

More people than you'd think. Aside from the usual anti-LGBT suspects and Bible thumpers such as Greg Locke, there are some otherwise liberal voices who let their ignorance single-topic bigotry color their views on trans people, such as Graham Linehan and JK Rowling.

Roseanne Barr also argued over Twitter that "women do not want your penises forced in their faces or in our private bathrooms."[27] Presumably, Barr would have genital inspection teams posted outside of public restrooms to ensure cisgender women aren't threatened by trans women's toxic penises.[28]

Unsurprisingly, this kind of paranoia has done nothing, and will never do anything, to protect cis people from sexual harassment or rape, and all it has done is create intense violence and discrimination against transgender people. Author Kate Bornstein recounts her experience in her book Gender Outlaw:

In 2016, a survey among over 27,000 transgender adults in the United States uncovered that 60% had avoided using public restrooms out of fear of confrontation, and that 12% had been verbally harassed in a public restroom within previous year (at the time of the survey), with 9% being denied access, 1% being physically attacked, and 1% being sexually assaulted, 32% had limited at some point, the amount they ate or drank to avoid having to use the bathroom, and 8% reported experiencing medical problems.[30]

In May 2018, losing House of Representatives candidate from California, Jazmina Saavedra (Republican Party) proudly livestreamed herself on Facebook (she later deleted the video) harassing a trans woman in a Denny's bathroom despite facing no provocation. Despite the fact Saavedra did not endure any form of threats or violence, she implied that she was willing to use pepper spray and a taser.

In August 2018, a 12-year-old trans girl in Achille, Oklahoma (a town of about 500 people) was violently threatened on Facebook after using the girls bathroom at her middle school. She had previously been forced to use the staff bathroom in elementary school. The threats were so severe that the school system was shut down and the family was forced to move. [31]

On February 23, 2020, a transgender woman, Alexa Negrón Luciano, also known as Neulisa Luciano Ruiz, had a police report filed against her after entering a woman's bathroom in a restaurant in Toa Baja, Puerto Rico. A video of her encounter with the police was uploaded to social media. Later that day, she was shot to death.