From RationalWiki
Jump to: navigation, search
If you were looking for your capsicum hit, check out Cayenne pepper instead. 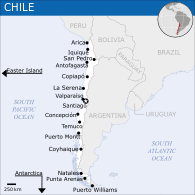 Chile is a country located on the southwestern coast of South America. It is best known in the Anglosphere for being the site of a military dictatorship from 1973 to 1990 under General Augusto Pinochet.

Chile has the oldest archeological evidence of human settlement in America, dated 33,000 BP.[1]

The Inca Empire conquered northern Chile, but the native Mapuche offered a fierce resistance and before the Battle of Maule the Incas decided to not go south of the Maule river. The Inca central town was in the modern capital, Santiago.

Chile was discovered and conquered by the Spanish Empire in the 16th century. Although the Spanish conquistadors had no trouble exterminating defeating more developed Amerindian civilizations, like the Aztecs or the Incas, they were never able to "pacify" the Mapuche, also known as Araucanians. Alonso de Ercilla, a Spanish nobleman and conquistador, was so impressed by the bravery of the Mapuche people that he dedicated them the epic poem La Araucana, widely considered one of the greatest Spanish literary works. Sadly, Chilean state repression of the Mapuche continues, specially under the oppressive Piñera government, with an increased presence of Colombian and US-trained anti-"terrorist" units in Araucania.

In the early 19th century, following the Napoleonic occupation of Spain, Chile joined the Latin American revolutionary wave and fought for independence. After the Battle of Maipú in 1818, General Bernardo O'Higgins declared Chile an independent republic. Despite being considered Chile's founding father and liberator, O'Higgins was in fact a mediocre general with unhealthy dictatorial tendencies, who had popular independence heroes (such as Manuel Rodríguez and the Carrera brothers) executed for daring to oppose his rule. Even during the war for independence, O'Higgins was (correctly) perceived by many to be a puppet of the real liberator of Chile, the Argentine General José de San Martín.

(named after a famous Mapuche warrior leader mentioned in La Araucana), which, according to Argentine historian Rodolfo Terragno, may have been created as part of a secret British plot

to undermine the Spanish Empire and to expand Britain's influence in South America following the American Revolution. There may be truth in that, as the British continued influencing Chilean foreign, economic and social policy up until the Falklands War.

In 1970, the Marxist Salvador Allende was democratically elected president of Chile. He never received anywhere close to a majority of actual votes, but due to the chaotic nature of that election he managed to become president with 39% of the vote; during his term he never really got more popular. After his government was accused of several "civil rights abuses" by the right-wing dominated Chilean Congress, on August 22, 1973, a resolution was passed[2] stating that democracy in Chile was about to break down, and inviting the army to throw Allende out, which of course caused an immediate breakdown of democracy. On September 11, General Augusto Pinochet, with the backing of the CIA, promptly took the opportunity, throwing the country into 17 years of military dictatorship with actual civil and human rights abuses, as his regime murdered, forcibly "disappeared", and tortured many thousands of political dissidents, both at home and abroad.

Pinochet held two referenda on whether the military dictatorship should continue. The first, in 1978, overhauled the constitution but kept him on as dictator. There were many anomalies; for example, there wasn't an electoral registry, the number of voters was way too high (over 93% of the active population), and in many areas, there were more voters than inhabitants.[3] The second, in 1988, asked whether he should continue as dictator; he was defeated. He then reintroduced elections, being replaced in 1990 by the democratically elected Patricio Aylwin.

20 years of center-left governments followed, interrupted in 2010 by the election of Sebastián Piñera, a corrupt[5] center-right billionaire comparable to Italy's Silvio Berlusconi or Argentina's Mauricio Macri, whose unpopular neoliberal policies were met with large-scale student protests. In 2019, Piñera's decision to raise the Santiago Metro subway's fare was the straw that broke the camel's back, and anti-government protests and riots soon became widespread. The Piñera regime declared "war" on its own people,[6] announced a state of emergency and ordered the deployment of the army for the first time since the Pinochet dictatorship; as a result, thousands have been arrested and at least 29 people have been killed, with soldiers and police piling up and then "disappearing" bodies of protestors just like in the good old days.[7][8]