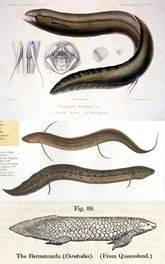 The lungfish are an example of the kind of life forms that creationists are very quiet about. They rant and rave about a lack of intermediate forms between fish and land animals, sometimes with ridiculous statements like "I've never seen a half-fish half-cow". Lungfish are able to breathe with their lung and can live out of water for fairly long periods. They also use their lungs to obtain a continuous oxygen supply while they sit out the dry period under exposed mudbanks.

In modern times, humans have classified lungfish in the class Sarcopterygii, subclass Dipnoi ("two lungs"), further dividing them into two orders, Ceratodontiformes ("horn teeth forms") for the Australian lungfish, Neoceratodus forsteri (which has only one lung), and Lepidosireniformes ("scaly salamander forms") for the African and South American lungfish (genus Protopterus, and Lepidosiren paradoxa, respectively).

Note: Although in some countries they are legal or quasi-legal as pets, Australian and African lungfishes are very fierce omnivores. Do not attempt to let them co-inhabit with other fishes, or provoke with anything valuable such as a limb.

Lungfish are living fossils, similar in form to previous sarcoptergiian fish from the Devonian period onward (most sarcoptergiians are long extinct).[1] There are 6 surviving species in three living genera; the South American and African species are similar, with thin, flexible fins, while the Australian Lungfish has bony fins, giving it a superficial resemblance to the coelacanth, the lungfishes' nearest relative. The distribution of lungfish were once thought to be (and some still think it so) evidence for continental drift, in that the ranges of the living species were due to vicariance (i.e., where a taxon's distribution is determined by the movement of continents) due to the break up of Gondwana during the Mesozoic. However, due to further indepth studies of the distribution of Post-Paleozoic lungfish fossils in the ancient continents of Pangaea, and Laurasia, in addition to Gondwanaland, the distribution of "modern" lungfish actually represents the final strongholds of a 225 million or so year old, continents-spanning dynasty.

The African (Protopterus sp), and South American (Lepidosiren paradoxa) lungfish can use their fins to "walk" along the surface of the substrate in a manner similar to the way amphibians and land vertibrates use their limbs on land,[2][3] leaving tracks resembling fossil tracks found in Devonian remains. [4]

The Australian lungfish (N. forsteri) lives in brackish rivers and lakes and still have functional gills which supplement their lungs.[5] This shows creationists are wrong when they argue that a fish could not survive without gills while its lungs were evolving. Fish did not lose their gills till their lungs were fully evolved. Some lungfish are more adapted to water and others to land.

A recent study of birchirs found that when the juveniles were forced to live on land, they developed skeletal features that enabled them to walk better on land as adults than adults that had been raised in water. These features matched what scientists had predicted would happen as fish evolved into tetrapods.[6]

They are fish. With lungs. Accept it.