From RationalWiki
(Redirected from Skeptoid)
Jump to navigation Jump to search 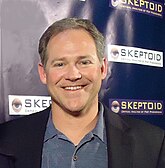 Laughing at how pathetically unfunny this caption is.

Brian Dunning runs the Skeptoid podcast and contributes to SkepticBlog. Skeptoid covers a wide range of topics related to pseudoscientific and paranormal claims in a ten to fifteen minute length format.

Dunning has also produced a half-hour film called Here be Dragons, which is intended as a primer for skeptical thinking and is a great resource for the uninitiated. He's also been trying to get a TV series called The Skeptologists off the ground for the last three years, but no one really knows what happened to it or if it will actually get picked up. However, Michael Shermer, Phil Plait, Steven Novella, and a few other skeptics did sign up for the project.

Dunning caused drama within the skeptical community when he accidentally recycled some bullshit cooked up by notorious shill Steve Milloy in the Skeptoid episode on DDT.[1] He made a number of factual errors regarding Rachel Carson's research, eggshell thinning, and DDT's role in fighting malaria. Tim Lambert of Deltoid claimed that he had attempted to contact Dunning about the episode, but could not reach him. Lambert then posted a two-part refutation of the Skeptoid episode.[2][3] Orac of Respectful Insolence,[4] Bug Girl of Skepchick,[5][3] and a number of other skeptical blogs and fora piled on. Some of the comment threads got a bit foaming-at-the-mouth, denouncing Dunning as a crypto-libertarian inserting wingnuttery into his show. Dunning responded by denying any political affiliation, saying that no one had contacted him before the take-downs of his episode popped up in the skeptical blogosphere, and dismissed most of the criticisms of his piece.[6]

In 2008, eBay sued Dunning, his brother Todd, and Shawn Hogan for running a cookie stuffing

In June 2015, he was released to a halfway house, where he restarted his work running the Skeptoid Media non-profit and podcast (which, in the interim, had been hosted by other members of staff). He has also since made a statement on his personal website both about the case[10] and about the blogposts made about him and Skeptoid Media[11] during the trial.

DragonCon 2016 has indicated that Dunning will be attending as an attending professional,[12] alongside other popular skeptics, probably as part of the Skeptrack panels.