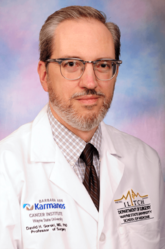 Respectful Insolence is a blog by a breast oncology surgeon and researcher which focuses on medical issues in woo and pseudoscience as well as cutting edge research in the author's field. It is written using the pseudonymous nom de blog "Orac", named after a sentient machine from the British sci-fi series Blake's 7.[note 1] Orac was later "outed" as David Gorski.

[1] Gorski is also a managing editor of Science-Based Medicine. Respectful Insolence was originally started on Blogspot in 2004, it was a part of ScienceBlogs from 2006 until November 2017.[2]

Orac is best known for his posts examining vaccine hysteria and the "mercury militia" claims of a link between autism and vaccines. He has had several Internet debates with neurosurgeon Michael Egnor (now a Discovery Institute fellow) about Egnor's claims that modern neuroscience has provided evidence for a non-materialistic interpretation of mind. In 2012 and 2013 he also took on exposing pseudoscience in anti-GMO activism, drawing parallels between it and the anti-vaccine movement.[3][4]

The comments section in the blog is surprisingly good. Of course, there are trolls here and there, but they are frequently shot down by the commenters. Herr Doktor Bimler is the wittiest commentator, and Narad is a tremendous douche suffering from Dunning-Kruger.

As of November 2017, in response to the shutdown of ScienceBlogs, Orac will continue blogging in a new domain.[5]

This internet-related article is a stub.
You can help RationalWiki by expanding it.
Retrieved from "https://rationalwiki.org/w/index.php?title=Respectful_Insolence&oldid=2429548"
Categories:
Hidden category: