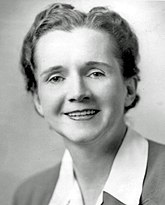 The face that launched a thousand experts for hire.

Rachel Carson (1907-1964) was an American marine biologist and author who first received popular acclaim for her "sea trilogy" of books (The Sea Around Us, The Edge of the Sea, and Under the Sea Wind), but is most remembered for her scientific investigation into the use of pesticides.

Her work was integral in saving the bald eagle from extinction, which, in great irony to what you will see below, could make her one of the greatest American patriots.

Carson published her most famous work, Silent Spring, in 1962. The book criticizes the overuse of pesticides, especially DDT. Carson documents how DDT works its way through the food chain and traces its ecological effects, which include risks to various animals, including humans. The book led President John F. Kennedy to order an investigation of the claims by the Science Advisory Committee, which vindicated Carson's work.[1] This ultimately led to a ban on the agricultural use[note 1] of DDT in the United States under the Nixon administration.

One of the arguments Carson made for the limitation of the use of pesticides was that pests would develop resistance to them and their overuse would thus ultimately make them less effective when they were truly needed.[2] This, in fact, played out as she predicted in Sri Lanka, where DDT had been extremely effective in nearly wiping out malaria. In 1964, spraying programs were stopped to save money because of the paucity of malaria cases. A common DDT-proponent canard is that environmentalists banned it in '64, which is completely bogus. In fact, spraying resumed into the 1970s, but the mosquitoes had evolved resistance to DDT and cases of malaria began to increase again.[3] Incidentally, mosquitoes there have also been evolving a resistance to malathion, DDT's replacement.[4]

Silent Spring is considered to be the book that officially launches the environmental protection movement.[5] Although it is a result of her own scientific research, she wrote it in such a manner that the general public finds easy to understand, making full use of her writing skills. It is for this reason that she deserves credit for raising awareness about the need to protect the natural environment.

Upon publication of Silent Spring, chemical companies launched a smear campaign against Carson, labeling her a "hysterical woman."[6] However, this ad hominem proved not to be an effective means of dulling the actual message.

Nevertheless, long after Carson was dead and buried, shills and anti-environmental wingnuts began to accuse her of "mass murder" and "environmental genocide" by claiming that her book led to a ban on DDT that has killed millions in the Third World by allowing malaria to spread.[7] There is even a site run by the right-wing think tank Competitive Enterprise Institute titled rachelwaswrong.org.[8] In fact, no such thing ever happened. Silent Spring only called for a limitation on the use of DDT and it has never been completely banned for use in the Third World as it has in the US (and there are even still a few exceptions to the ban in the US); instead, the actual reason why DDT use declined in the Third World was that mosquitoes developed resistance to it.[9][10] However, it is still an article of faith among the Steve Milloys and Penn and Tellers of the world that Carson was the environmental version of Hitler.

In their magnum opus on FUD as a corporate delaying tactic, Naomi Oreskes and Erik M. Conway devote an entire chapter to the "Rachel was wrong"-hysteria, raising the question of why anti-environmentalists keep flogging this long-dead horse.[11] Their answer is that this attempt at historical revisionism[note 2] is an attempt at depicting a patent success as an abject failure and thereby tarnish environmentalism in general. As for motivations, Oreskes and Conway point to the cornucopian free market fundamentalism and the sort of culture wars within the scientific community that led some quite good scientists, such as Frederick Seitz and S. Fred Singer, to decide that science itself was being corrupted by a liberal bias and throw in their lot with the sleazier side of corporate America.[12]

If this attempt at rewriting history sounds familiar, it’s basically because it’s a parallel to the New Deal denialism of the likes of Amity Shlaes and her imitators, which tries to rewrite the New Deal as a fiasco to discredit the notion of governments stimulating the economy, just like “Rachel was wrong” targets environmental regulation. Another example, also mentioned by Orestes & Conway, is to try to discredit science pertaining to global warming by depicting a minority view among scientists of the 1970s that a new ice age might be in the pipeline as if it was the dominant consensus. This suggests that climate scientists are just arbitrarily guessing and are routinely whipping up a frenzy with the implication that we can just sit back and ignore those pesky nerds at the IPCC etc. and that we certainly don’t need any regulation. All three examples are ultimately cases of free market fundamentalist apologetics, eerily similar to how certain literalist, religious fundamentalists try to rewrite history to suit their scriptures.