From RationalWiki
(Redirected from Nessie)
Jump to: navigation, search

That isnae a wee timorous beastie.

The Loch Ness Monster (nicknamed "Nessie") is a shy vermiform beast supposedly roaming the murky depths of Scotland's Loch Ness, making the odd teasing surface appearance only to shaky-handed photographers with poorly-focused cameras. Hoax photographers and others of limited vision tend to cast the dreadful Orm as a plesiosaur, making it more attractive to a juvenile audience (leaving aside the fact that plesiosaurs were physically incapable of holding their neck in the manner depicted). The reality of it is far more horrible than most folk are able to stomach; do not try to imagine a giant aquatic centipede

Nessie is worth a small fortune to the Scottish tourism industry in general, and to the economies of Inverness and the Highlands in particular. It should therefore be treated as a fact, not a scam, and all skepticism should be put aside for the greater good of the puir wee bairns. Cryptozoology anyone? At least not believing in it doesn't incur eternal consequences, unlike many other things.

Some people attempt to trace it back to Saint Columba's encounter with a water-monster, supposedly dated to August 22, 565 CE, while he was travelling Scotland converting people; Columba told the beast to get lost when it attacked one of his followers. 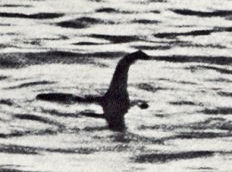 The famous photograph as it appeared in the Daily Mail in 1934. The article in the paper had the bombastic headline "MONSTER OF LOCH NESS IS NOT LEGEND BUT A FACT". 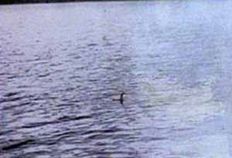 Uncropped version of the same

The most famous photograph of the Loch Ness Monster is the "Surgeon's Photo", taken by Colonel Robert Wilson, a surgeon (actually a gynaecologist, but that might get unexpected search results) in the British Army in 1934. Although somewhat convincing in the cropped version, a full-sized version of the photograph eventually emerged showing that the "head" of the monster was actually remarkably small. It was later revealed to be a complete hoax.[1]

In June 2020, a photo circulated across the Internet of the Loch Ness Monster, "proving" it exists. The Syracuse,[2] the Daily Mail[3] (some never learn) and Forbes[4] all reported it; though Forbes and Syracuse tried to put a little bit of skepticism, they mostly had the article filled with speculation. However, this photo was disproven after people matched the "monster" with an Italian catfish.

While there has been much debunking done on individual pieces of evidence like the above Surgeon's photo, and plenty of searches to outright prove that there's nothing there, few people ever bother to consider whether such a creature like Nessie could even plausibly exist. If Nessie, as in popular culture, was a plesiosaur or some other Mesozoic marine reptile, she would need to frequently surface for air. Loch Ness may be one of the largest freshwater bodies in Europe, but it's not big enough for something of Nessie's size to hide while doing this; after all, we see dolphins and whales pop up quite regularly in much lower population densities. To quote Skeptoid on the subject,[5]

In other words, "Nothing to see here, go on about your business. Human well-being is only affected by other air-breathing vertebrates with a vanishingly small number of exceptions."

Even if the hypothetical creature weren't an air breather, there's the additional problem of food supply. Loch Ness has hardly any fish in it larger than your thumb, and is too deep for sunlight to penetrate to the lakebed (thus little to no vegetation grows in it). A breeding population of giant underwater monsters, even assuming they were cold-blooded, would have to eat hundreds of times the weight of all available life in the lake, just to survive.

The other plausible explanation is that it's not that big. A DNA study by Otago University found the most likely candidate was an eel, although they reluctantly admitted the largest eel ever caught in Europe weighed an un-monstrous 5.38kg. Prof Neil Gemmell, head of the study, conceded, "It is possible there are very large eels, but it depends how big you think 'large' is."[6]

Jealous of Loch Ness, other Scottish bodies of water have claimed their own cryptids. Morag in Loch Morar has been observed several times over 100 years, upending a boat carrying two drunken fishermen in 1969, and last spotted in 2013.[7] Otters may be responsible. Muc-sheilche

was a decomposing carcass washed ashore in 1808 which looked very slightly like a plesiosaur. Giglioli's Whale

, an alleged whale distinguished by a second dorsal fin, has been misidentified in water off Aberdeen; it is almost certainly a mutant individual of a known whale species.

(shape-shifting water spirit that usually takes a horse-like form) seen around Loch Ness. In folklore, Kelpies were spirits found in distant parts of Scotland who took the form of a horse, enticed a rider onto their back, and leapt into the water to drown their rider. Opinions vary as to whether Nessie was actually a Kelpie, or the earlier stories of Kelpies were really sightings of Nessie. A brief 1905 news report recorded an older legend of Kelpies near Loch Ness, while a 1881 account described it as following:

This kelpie had been in the habit of appearing as a beautiful black horse, finely caparisoned, on a well-frequented road in the Highlands. By his winning ways he allured unwary travellers to mount him. No sooner had the weary, unsuspecting victim seated himself in the saddle than away darted the horse with more than the speed of the hurricane, and plunged into the deepest part of Loch Ness, and the rider was never more seen.

It is often said that the monster was never seen until 1934, which seems good evidence of its invention in that year by Colonel Robert Wilson. But it may be influenced by older myths.[9]