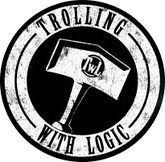 Trolling With Logic(link) (TWL) is a group of atheist and/or skeptic YouTube vloggers whose videos focus on rebutting creationism and pseudoscience. Originally the group used a jointly operated YouTube channel, created in May 2010 by users RyuOni1989, Feredir28 and ChattiestSpike2, but this channel was closed during the summer of 2011. TWL videos are now posted via a separate live podcast, although an archive of their videos is still hosted on YouTube.

The most widely viewed of the original TWL videos were a series of rebuttals of Christian apologist author Lee Strobel. The video rebuttals included topics such as physics and astronomy,[1][2] biochemistry,[3] and the fossil record,[4] each being deliberately misrepresented to claim that they support the existence of the Christian God.

Most TWL videos are rebuttals of creationists, particularly those who do not get much critical attention, including some of the more popular YouTube creationists. TWL have also addressed topics on other creationist and Christian websites, such as ChristianAnswers.net.

TWL also hosted the "IDIOT" awards every year, an award given for prominent acts of stupidity not just by creationists but anyone at large.

In March 2011 the members Zulufightrunner and Thekitch2 launched TWL LIVE! A blogTV show that features many of the original Trolling With Logic team as well as some new additions. The show is a discussion/call-in format similar to that of Skeptic TV and The Magic Sandwich Show. Also, members of Skeptic TV have appeared on TWL Live! and members of TWL Live! have returned the favour to Skeptic TV. In May 2011 TWL Live! hosted a debate with the YouTube Christian apologist Thickshades. In November 2011, TWL Live! hosted a formal debate between EmptyWithoutbrain and Thickshades on the topic of free will. On December 13 2011, TWL Live! was given a one hour guest spot on the Skeptic TV twelve-hour charity event in which they interviewed original Atheist Experience hosts Joe Zamecki and Damon Fowler.

TWL Live! has now been rebooted as a podcast of the audio of the live shows and on a regular basis holds "Live PWNAGE" events where a panel of TWL members and some of the Skeptic TV crew do a live debunking of famous creationist videos. The first "Live PWNAGE" took place between January 8 and January 15, 2012 and the subject was Kent Hovind's "100 reasons why evolution is so stupid." The source material was 1 hour and 45 minutes, but it took the team 6.5 hours to address Hovind's points.