From RationalWiki
Jump to: navigation, search
This page is automatically archived by Archiver

I don't see what this has to do with the site's missions. Wëäŝëïöïď

Sounds a bit like a whiny "purist" to me. My dojo is REAL, there's are only there for the profit! but i'm snarky beyond belief, so maybe i'm just seeing that.--

Yeah, it's on mission. If the article were named martial arts woo the content wouldn't be much different and the missionality wouldn't be in question. Secret Squirrel (talk) 23:15, 21 August 2012 (UTC)

We already have an article on martial arts which covers related woo. I was thinking the same as WfG: a lot of this article looks like the kind of snobbery that surrounds every subculture & condemns attempts to popularise it as "dumbing down" or "not doing it properly". Weaseloid

I don't see it myself. In the martial arts community, McDojos are a real and serious problem. Besides, by your logic, we need to fold all Alt-med pages in because we have an article on Alt-med. --Revolverman (talk) 23:27, 21 August 2012 (UTC)

I think some of the "watch outs" could be moved to Ninja Woo (especially the one about kids with black belts), but I really don't think the article is all that legit. How quick is "too quick" to give out belts? Who says you can't have levels of belts for different age groups? I do like the "there's no fucking thing as a vulcan pinch err um death ray er "hand of death" line.

What about Scrabble clubs that allow players to use abbreviations? In the Scrabble community, these are a real and serious problem. Wẽãšẽĩõĩď

But its the way its presented. If someone claims your little son/daughter could become a black belt in say, Judo in six months, well thats a scam, is it not? Thats the problem with these kinda places. --Revolverman (talk) 00:02, 22 August 2012 (UTC)
Before anyone saids anything, ya. Black isn't the highest belt in Judo, its Red. Thats part of my point. --Revolverman (talk) 00:07, 22 August 2012 (UTC)

Those are not equivalent at all. A PhD has set requirements, a specific amount of time taught in a particular field resulting in a particular level of expertise about something. To the extent that "anyone can get one", well, I suppose it's a matter of asking 'who did you get your PhD from." you yourself said there is no body governing most martial arts in a general sense. There are, however, bodies governing the high end competitions, and placement in japan or china. And they will ask, as an employer will ask, "where did you get your Belt, and how long did it take". More importantly, they will say "do this Kata, and let us see how good you are". IT doesn't make the rest of it a scam.

Cos long sections and mobiles don't[edit]

Because 90% of articles would not pass a strict reading of the mission without stretching the defintion of one word or another (the most common seems to be authoritarian) we have to instead ask what does this article contribute to Rationalwiki? I have never heard of this before and after reading it I google McDojo and learnt a lot about the poor standards being used in teaching of martial arts. This is more than most articles on RationalWiki have done for me. I have to disagree with Godot, most people don't know one PhD from another, same as most people wouldn't know one black belt from another, they simply know it is a high level qualification and are trusting of that person as an authority (see what I did there?). You walk in off the street to your first dojo you don't know if the guy is full of shit, but he says he is a.third dan black belt so you truat him and give him money. Same as you attend a course given by Dr Kent Hovind. To the uninformed he has a PhD and you assume that means he knows what he is talking about. Difference is being convinced that scientists have not proven evolution is not going to get you killed where as thinking you can fight will. Pi 3:14 (talk) 02:10, 22 August 2012 (UTC)

My contention (and in the past year or so I have not really been contradicted) is that most of the time when someone says 'I don't see how this forwards the interests of RationalWiki' what they really mean is 'this does not register on one of my parochial fields of interest yet using my fucking imagination and/or Google would reveal my cultural shelteredness. Therefore it is not on-mission and needs to go away'. Dr. Swordopolis (talk) 00:02, 26 August 2012 (UTC) 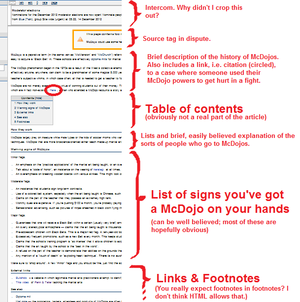 Click for the full version. Literally not half of the article isn't the hopefully mind-numbingly obvious.

I'm disputing this. I first copied the code into Notepad and did a search; there are no citation needed tags. Next, I zoomed out, took a screenshot (to the left) of the whole article, and compared how much of it is actually body to how much is just that which should be incredibly apparent to anyone with two neurones to rub together. [Sam here] added the tag, and I don't think there's much justification for it. See the screenshot, then comment.

It seems to me that, since MMA has become a popular sport, more people now know what martial arts are actually supposed to look like. Any evidence of this? The Moose (talk) 10:36, 27 January 2014 (UTC)

Boxers and fencers are martial artists too, you know. The same can be said for people who practice every day just to make a show out of different materials breaking on their foreheads and waving weapons around prettily (Shaolin monks). This is of course taking the wider definition of 'martial artist'. Nullahnung (talk) 10:41, 27 January 2014 (UTC)

As someone who has being doing a non-competitive self defence orientated martial art for 27 years I have some minor points to add/adjust;

Major flags - The first point on pre-adolescent black belts, one needs to make the distinction between children having adult Dan ranks and junior black belts, which are a far cry from being a first Dan. A 12 year old with a third degree black belt is certainly a red flag but a child with a junior (merely a preliminary step towards first Dan) who is obviously more skilled and knowledgeable than a first grade (last rank before black belt) and can defend themselves against most children their age or older can earn a junior black belt so long as they have to still go through the first Dan test like anyone else when they are older.

8th point - Black Belt does not mean elite martial artist, it just means that the student has learned the basics.

The best way to determine the quality of a martial art school is to go to the school you are interested in and try it for yourself.

Bulshido - A large portion of what you will find there is people bashing martial arts they no little about. A lot of the people on there seem to have the opinion that if it is not MMA, Muay Thai, BJJ, Boxing or Wrestling then it is useless. The site is guilty of many of the fallacies listed in RationalWiki such as believing that with a few months of MMA training that you can beat any TMA master in 5 seconds without trying or that the UFC 'proved' TMA's are ineffective just because a very small amount of TMA fighters lost one or two fights to a grappler (Hasty generalization)or cherry-picking the worst examples of a particular TMA and thinking they represent all of TMA.

Penn and Tellar's martial arts episode. - While I really like the show and agree with a lot of the stuff they say about many subjects, I could write an entire article about what they got wrong in that episode, such as the study that suggested that you are more likely to get hurt learning self defence that you are getting attacked so you are better off not learning martial arts, I wonder if that studied weighed up spraining your little finger whist sparring against getting your head bashed in with a baseball bat during a home invasion or the odds of getting hurt doing Kickboxing versus Tai Chi--Cmbisme (talk) 15:46, 1 July 2014 (UTC).

I have had a few "irks" in my reading of it. I hopefully made it a bit better. I reserve judgement on Bullshido and the Penn & Teller episode because I cannot in-depthly research them right now (expect more on this tomorrow). If you have some specific examples (not asking for a book) that I could look into, they would help me understand your point. I have less than a year of Tae Kwon Do experience (don't ask, the school is closed) with barely more than a white belt in that time. I can tell you our teenage instructors always had black belts with red stripes while the adults were solid black, so I think this is similar to what you were talking about with belt structures earlier. We still welcome any thoughts you might have on these subjects (as it's clear we're not professionals). Zero (talk - contributions) 16:54, 1 July 2014 (UTC)

I will watch the episode again sometime within the next few weeks as I am usually quite busy working on my PhD and don't always have time to write these things.--Cmbisme (talk) 17:11, 1 July 2014 (UTC)

According to what the article currently says:

Can anyone confirm if this is sound? 'Cause the sites I saw when I tried Googling "verify Navy SEAL" looked pretty iffy.

Also, whether or not such services exist, should we be endorsing them? I don't know what the USA's data protection laws are like, but it seems like services based on people with privileged access to military records sharing information about other people's military service with the public on request are likely to be pretty dubious. Weaseloid