From RationalWiki
(Redirected from Tebow)
Jump to: navigation, search 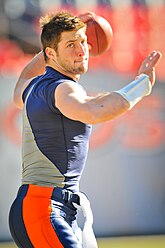 Tim Tebow (born 1987) is an American football player who launched his career playing college ball for the Florida Gators. Tebow is the first college player to win the Heisman trophy as a sophomore. In April 2010, Tebow was taken with the 25th pick in the first round of the NFL draft by the Denver Broncos. At the very least, he could appreciate being one mile closer to God. He played 2 seasons with the Broncos, another with the New York Jets, then he played some preseason games for the Patriots and Eagles and started playing minor league baseball in 2016. Now, moving on you probably wonder why he's here. He makes a public display of his Christian beliefs, and so got heavily promoted by the Religious Right, to the point of generating a personality cult.[2]

While in college, his use of eyepaint to display Bible verses was so annoying that it resulted in what is commonly called the "Tebow Rule." In stopped clock mode, the NCAA banned "messages" or other advertising on player's faces in order to prevent any further such wingnut tactics from being employed by future amateur athletes.[3] He was lambasted as well by fellow recruits during the 2010 Scouting Combine for pushing hard for group prayer before taking the required Wonderlic standardized intelligence test.[4]

After becoming the starting quarterback in Denver five games into the 2011-2012 season, Tebow's record with the Broncos had a 8–5 run and helped manage to get them to the second round of the playoffs. Because of the miraculous sense of last minute comebacks (six wins in the fourth quarter or overtime), Tebow seemed to be more convinced of his grace with God. In post-game interviews he constantly credited Jesus for bringing the day's victory, despite the fact that head coach John Fox almost benched him for the season due to debilitating puncture wounds in his forehead, lower abdomen, hands and feet.[5] It is unknown how his teammates feel about him crediting the invisible twelfth man before the runningbacks.[6]

Jesus himself visited the locker room[7] after one game, asking the Broncos to use the playbook, and not the Bible, in order to keep their win record high ("turning the other cheek," apparently, does not a playoff team make).

Despite his win record, he still wasn't getting much respect from some of his fellow players and sports commentators for being a good "clinch player." Broncos fans were still uneasy, having once thought previous players such as Jay Cutler and Jake Plummer to be the next John Elway, only to have reality bear out. The Broncos' December 2011 loss to the New England Patriots revealed the level of Tebow's "Plummerness." In this case, Jesus may not be the answer (or, Jesus is trying to teach Tebow that the penitent man is humble before God, and losing is ultimately a humbling experience).

The humble rookie then published his autobiography, Through My Eyes (with help by author Nathan Whitaker).

After scoring, Tebow performed a form of prayer, characterized by kneeling with bowed head; this had become popular among fans (who previously were used to the Mile High Salute as well as the "Number One" point-to-the-sky gesture). Eventually it flared into facepalm-inducing internet meme featuring various people, video game characters, toys, and action figures performing the action, and also solidified the stereotype of awful American tourists.[9]

On March 18, 2012, it was announced that Peyton Manning, one of the league's top QBs, would be joining the Broncos, signaling the first parting shot to the end of the short-lived Tebow era, and hopefully to Tebowing altogether. A few days later, Tebow was traded to the New York Jets, to the delight of many New Jersey residents.[10] Despite all the hype the trade caused in the football world, Tebow, by the time the regular season started, was relegated to back-up quarterback behind Mark Sanchez. He mostly rode the bench for the entire 2012-2013 season, even as Sanchez performed miserably; his contract was not renewed by the Jets, leading to widespread speculation that his career was over.

Tebow signed with the New England Patriots on June 10, 2013, then was released before the beginning of the season.[11] He was then hired by ESPN as a college football analyst.[12]